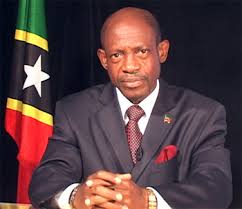 Prime Minister Denzil Douglas has, following Monday’s launch of the People’s Labour Party, reiterated calls for his two former senior ministers to resign as the representatives of their constituencies.

Dr. Douglas on his Ask the PM radio programme Tuesday, continued to label Dr. Timothy Harris and Sam Condor as traitors attempting to help the Peoples Action Movement (PAM) defeat his government. “This I emphasize is a betrayal, it is a betrayal of the people in constituency 3 and 7,