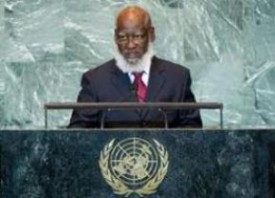 Belize critical of rich countries for lack of aid

Belize Monday blasted rich countries for not honouring commitments to assist poor countries, saying that 13 years into the process of implementing the Millennium Development Goals (MDGs) the “vast majority of nations are still mired in poverty with scant, or no sign of development.

“We note with disappointment, that the rich countries have not even been able to bring themselves to honour their commitment to contribute even the 0.7 per cent of their gross domestic product as official domestic assistance (ODA) to poor countries,” said Foreign Affairs Minister Wilfred P. Elrington.

Addressing the 68th Session of the United Nations General Assembly Debate, Elrington said the resources being provided by the international and other financial institutions and by private donors fall far short of what is needed by poor countries for the attainment of these most laudable goals.

“It is evident that for some inexplicable reason the developed countries abandoned goal 8 of the MDGs, titled “Development a Global Partnership for Development”.

He said in the absence of the “partnership” of the developed countries the attainment of the MDGs by poor countries would remain “illusory”.

He said developed countries neither possess the requisite “leadership cadres; the financial, human and technical resources; the infrastructure; the requisite levels of investment and trade; nor the institutions to foster the needed levels of development to generate the resources needed to underwrite the expenses associated with the attainment of these goals.

“And what is, perhaps, even worse, far too many countries have no realistic prospect of attaining that capacity within the foreseeable future,” the Belize foreign affairs minister said.

He said notwithstanding the situation Belize remains committed to the attainment of the MDGs and is “assiduously pursuing same”.

While urging that stating that the MDGs remain a work in progress, Elrington said the UN’s Post -2015 Development Agenda must be “informed by our experiences with the Millennium Development Goals”.

In addition, he urged that new mechanisms be devised to ensure that the Post-2015 Development Agenda does not “suffer a similar fate”.

Elrington said as the UN embarks on setting the stage for the post-2015 Development Agenda, Belize has recognized and identified four ?underpinning points.?

He said the Post-2015 agenda must be global; should integrate the outcomes of major summits into a “cohesive, action-oriented and implementable agenda,” building upon successes and improving upon lessons learned; that the necessary resources be “sourced and committed” to underwrite this new partnership for development; and that the agenda be guided by “our core values of conflict prevention and poverty eradication”.

The foreign minister said Belize endorses the intergovernmental processes for the elaboration of the Post- 2015 Development Agenda, adding that the country’s domestic priorities, which complement the global agenda, are contained in the document Horizon 2030, “which articulates our development framework”.

Elrington said topping the list of our priorities is the resolution of the Guatemalan claim, stating that it poses an “existential threat to our nation and requires urgent resolution if the peoples of our two countries and our region are to continue to enjoy the peaceful coexistence that has characterized our relationship thus far”.

He noted that when he addressed the General Assembly last September, he was “pleased to report” that the two states had “agreed to submit to the citizens” of their respective countries, in simultaneous referendum on October 6, 2013, “the question of whether it was the will of our respective constituencies that the Guatemalan claim be submitted to the International Court of Justice for final resolution”.

Regretfully, however, Elrington said last April Guatemala gave official notice to both Belize and the Secretary General of the Organization of American States that the Guatemalan government had decided not to proceed with the referendum “and was proposing that the same be postponed sine die.

“Not unexpectedly that decision was not well received in Belize,”he added, stating that the Guatemalan claim is “a constant source of anxiety to our citizens as well as to investors in our country.

“Furthermore, both our territorial and our maritime border regions have been suffering from depredation and environment degradation in consequence of the wanton and sustained illegal activities of Guatemalans, fishermen and other criminal elements engaged in narco-trafficking, human trafficking, smuggling, illegal panning for gold, the extraction of Xate and other exotic plants and animals, the illegal felling of timber and the pillaging of our ancient Mayan ruins.”

In addition, he said that the “increasing trespassing” by the Guatemalans into Belize has given rise to more frequent violent encounters between Guatemalans and members of Belize Defense Force, “resulting in fatalities, in some instances.

“These incidents put a heavy strain on the relations between our country and Guatemala and the peace of our region as a whole.”

The foreign minister said while Belize “appreciates that the activities of the Guatemalans in our border regions are as a direct result of poverty and failed development in their own country, we are concerned by the fact that such activities create the conditions for conflict”.

He noted that there are about 65 Guatemalan villages along the 141-mile Belize Guatemalan border, adding that these villagers are “largely indigent and unemployed”.

In the absence of employment and increased security patrols on both sides of the border, Elrington said the incursions of the Guatemalans will “not abate but will only get worse”.