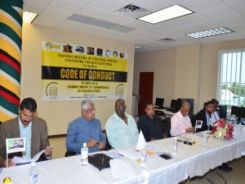 ALL EIGHT political parties contesting the 2015 General and Regional Elections were represented at the Guyana Elections Commission’s (GECOM) Kingston office yesterday for the signing of the long awaited Code of Conduct for political parties.People’s Progressive Party/ Civic (PPP/C) presidential candidate and incumbent Head of State, Mr Donald Ramotar, was the first to ink the pact at the Office of the President in the presence of the GECOM Chairman, Dr. Steve Surujbally.

He contends that the signing re-affirms the PPP/C’s commitment to ensuring that there is fair and good conduct during and after May 11 Regional and General Elections.
President Ramotar was represented at yesterday’s ceremony by People’s Progressive Party (PPP) General Secretary, Clement Rohee.
Meanwhile, presidential candidate of the other main political party, the Alliance of A Partnership for National Unity and the Alliance For Change (APNU+AFC), David Granger, underscored his hope that the guidelines are adhered to with full compliance.
The other political parties represented were the United Republican Party (URP) and the Healing the Nation Theocracy Party (HTNT), The United Force (TUF), the National Independence Party (NIP), the Independent Party (IP) and the Organisation for the Victory of the People (OVP).

GECOM Chairman, during remarks at yesterday’s event, dubbed the Code of Conduct the “Holy Grail” for campaigning.
“This Code is more than a guideline. It must be seen as the Holy Grail for campaigning. It cannot be allowed to disappear into the fog of political nothingness…this Code must not be weakened by distrust or be thrown into the dustbin by this evening. It must not be discarded because of petulance, vexation, petty discontent, manufactured resentment and theatralic posturing,” Dr Surujbally stressed.
He added, “Statements made at news conferences and by road-side platforms should be to edify and inform, not to numb, mystify and create doubt and social unrest…I dare say that arrogance, aggression, slanderous and overly confrontational statements on the hustings or at news conferences might go a long way to ensure the discreditation of a politician.”
He highlighted that while the Code is not punitive, in being self-regulatory, it is not complex; rather it is straightforward and promotes peace, orders, compliance for electoral laws, respect for opponents and respect for the Guyanese people.

On that note, Dr Surujbally charged that once this conviction is shared by all signatories, behaviour on the campaign trail will be focused on healing, not on promoting, cultivating or exacerbating existing social fissures.
The GECOM Chairman made it clear that GECOM must not be placed in a position of trying to manage and produce credible elections in an environment of “hostility and turbulence, calculated coarseness and unnecessary vulgarity” and other attacks.
As such, he welcomed the move by the political parties to sign the Code of Conduct and made it clear that it is “here to stay” and does not have an expiry date.
“(Today is) a day which reflects a reinforcement on the desire to exhibit political maturity – a coming of age, so to speak. This is the day on which political differences are consciously cast aside, so that noble, visionary patriots – by placing their signatures on a document – are in effect placing our nation first and are demonstrating their willingness, their preparedness, their commitment to adhere to the rules of the Code of Conduct to which, essentially, they themselves have meaningfully contributed,” Dr Surujbally declared.

WELCOMED
Meanwhile, Chairman of the Private Sector Commission (PSC), Ramesh Persaud, who was the most recent to stress the need for political parties to sign the Code of Conduct, was among the first to welcome the move.

“The PSC is very pleased that the political parties’ Code of Conduct produced by GECOM has been signed by the leading candidates of all the contesting parties. The Code sets out some high standards to be followed by the contesting parties and we trust that there is full compliance to the principles.
Now that political parties have signed on to the Code of Conduct, it is expected that they would abide by the protocols documented in the Code, all in the interest of free and fair General and Regional Elections.
The advantage of having such an agreement in place, according to GECOM, relates to being able to guard against confrontational and vitriolic election campaign meetings/rallies and statements.
GECOM regards contesting parties signing the Code as demonstrating their willingness to craft their respective election campaign strategies in ways that contribute to the maintenance of peace and tranquility throughout and beyond the elections. 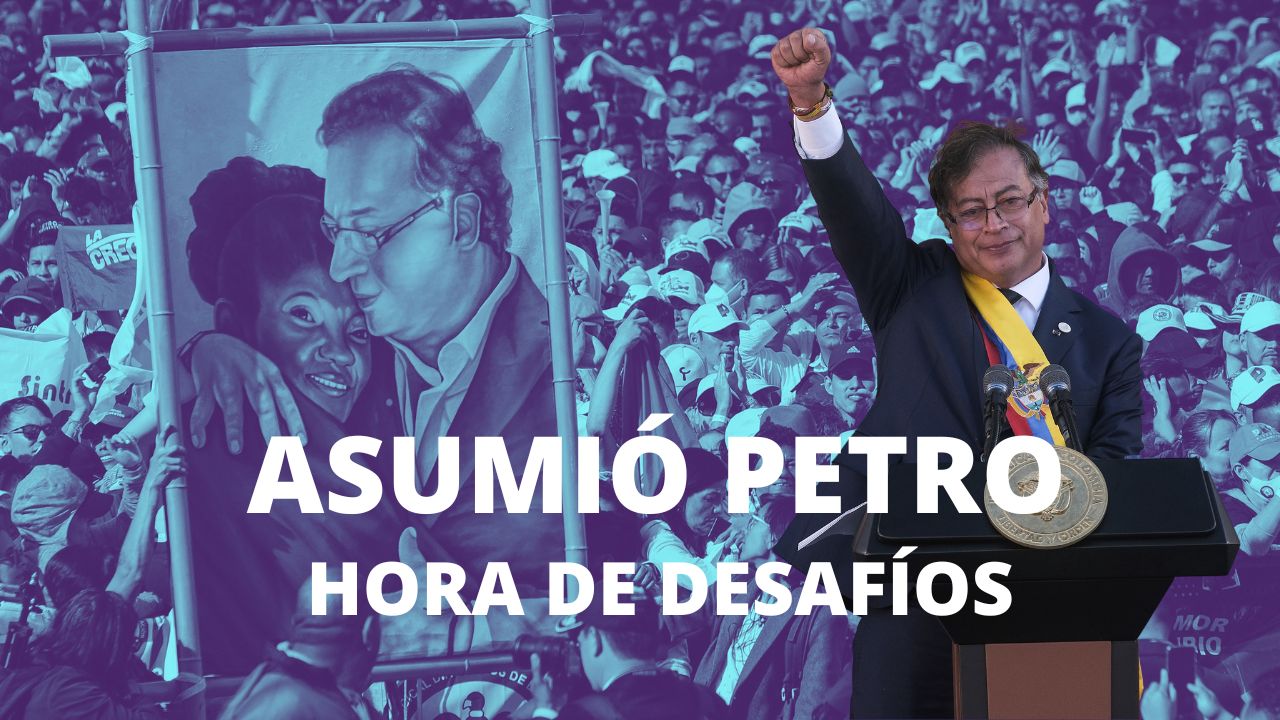 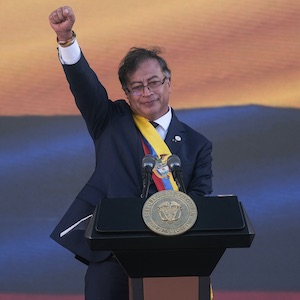