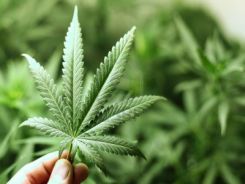 Antigua & Barbuda could see changes to laws relating to marijuana usage, after Minister of Social Transformation Samantha Marshall called for Commonwealth countries to decriminalise the possession of small amounts of the substance.

Minister Marshall said regional member states should follow the “good sense” of the government of Jamaica, which, after years of dialogue, amended their laws earlier this year to allow citizens to have small quantities of cannabis, without fear of prosecution.

“It is time, in my view, that other Commonwealth countries do likewise, while continuing education to stop its use,” Marshall said.

The minister with responsibility for youth said it is her belief that most of the individuals arrested for possession of marijuana are youth, and it is time to end hypocrisy in how ‘weed’ is prosecuted in comparison to other drugs.

“We have not banned alcohol or tobacco even though it has been proven that they are more addictive than marijuana,” she said. “My point is that we should stop criminalising our own youth in order to march to the beat of some other country’s drum.”

Marshall said Jamaica is “breaking sensible ground” on the issue of marijuana use in the region.