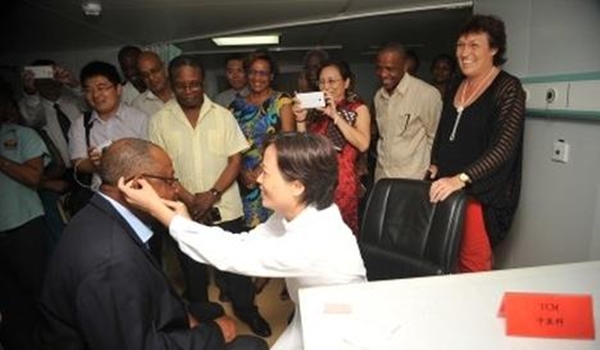 The government of Barbados is currently engaged in ongoing discussions with the embassy of China to facilitate the assignment of Chinese health care personnel in Barbados.

News of this came from Health Minister John Boyce on Tuesday night, as he addressed a reception for members of the Ark Peace, a Chinese naval hospital ship now visiting the island.

Boyce said that during the ship’s visit, Barbadians referred by the Queen Elizabeth Hospital and primary health care institutions benefited from services such as mammograms, CT scans, X-rays, ultrasounds and echocardiograms.

Staff of the ministry of health and the Barbados Defence Force also attended seminars on board the Ark Peace on traditional Chinese medicine and medical response in a disaster, as well as engaged in a simulation exercise on rescue and transfer at sea.

Boyce described the partnership between Barbados and China as important, adding that the cooperation had also extended to education, training, culture, tourism, agriculture and the military. He noted the recently-signed loan agreement for US$170 million, which will go towards financing the redevelopment of Sam Lord’s Castle.

He revealed that the government is also looking to China to access financing for other projects, including the expansion of the Grantley Adams International Airport; the refurbishment of the Garfield Sobers Gymnasium; and the Water Mains project, which is scheduled to start next year.