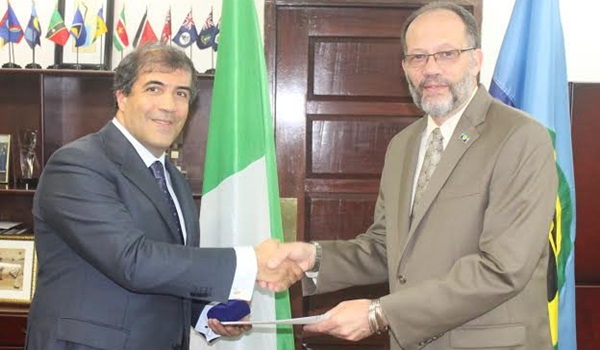 The Caribbean Community (CARICOM) and Italy continued on the path of stronger relations on Wednesday as the new Italian Ambassador to the Community presented his credentials at the Secretariat’s Georgetown, Guyana headquarters.

CARICOM Secretary-General Ambassador Irwin LaRocque received the letters of credence from His Excellency Silvio Mignano who is based in Caracas, Venezuela.

Both men emphasised the strength of the friendship between the Community and Italy and Ambassador Mignano observed that there were similarities, particularly of lifestyle, between the region and his country.

Ambassador LaRocque expressed his pleasure at the Italian envoy joining the CARICOM family and cited the long history of co-operation between that country and the Community. He also took the opportunity to remind the Ambassador of the unjust blacklisting by Italy of some CARICOM Member States as non-co-operative tax jurisdictions. He expressed the hope that this issue would be rectified urgently given the adverse effect such an action was having on the economic and banking sectors in the Community.

Wednesday’s ceremony came in the wake of the signing of two co-operation documents between the Community and Italy last month during the COP 21 in Paris, France. A memorandum of understanding to establish mechanisms for cooperation in 13 socio-economic fields was signed by Ambassador LaRocque and Italy’s Special Envoy for the Countries of the Caribbean, Paolo Serpi. CARICOM and Italy also signed a pact to start a five-year program worth six million euros to help Caribbean countries mitigate the negative impact of climate change. The Caribbean Community Climate Change Centre (CCCCC) signed on behalf of the Region.