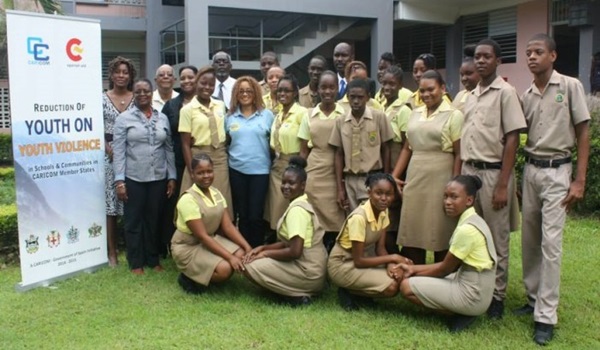 Each year, approximately 200,000 youths aged 10 to 29 die, and many more sustain serious injuries because of violence across the world. Youth violence is a global challenge that the Caribbean Community (CARICOM) knows only too well: its young people are both the main perpetrators and victims.

But CARICOM is accelerating its fight. Its most current initiative is a two-day youth forum in Georgetown, Guyana. The forum begins on Monday, with an opening ceremony to be chaired by CARICOM Secretariat director for human and social development, Myrna Bernard. Guyana’s vice president and minister for public security, Khemraj Ramjattan, will deliver the address.

The forum, funded by the Caribbean Development Bank (CDB) and the government of Spain, is an outcome of the two-year CARICOM/Spain Project: Youth on Youth Violence in the Caribbean. This project which aims to reduce youth on youth violence, particularly in schools, is now being piloted in five member states: Antigua and Barbuda, Jamaica, St Kitts and Nevis, Saint Lucia and Trinidad and Tobago.

New platforms for transformation will be explored to break the cycle of youth crime and violence. Specifically, CARICOM policy-makers, the media and other stakeholders will be sensitised on the major elements of youth crime and violence and on the responses to break the silence. Good practices will be shared with a view to replicating the lessons learned.

At the same time, strategies for a multi-sectoral ‘whole of society’ response to the challenge will be examined, as well as the means for greater collaboration among institutions and development partners to sustain CARICOM’s response to youth crime and violence.

Approximately 100 participants from across CARICOM will engage in interactive sessions centered on four main topics/issues: violence against children; school violence; gender based violence; and youth gangs and violence, together with the cross-cutting themes of gender, culture and other social determinants.

The forum will employ a mix of feature presentations, panel discussions and video presentations, with participation from a wide range of stakeholders including policy-makers in all sectors: law enforcement, the private sector, labour, development partners, civil society, academia, faith-based and community organisations, youth, reformed non-traditional leaders and special interest groups.

Crime and violence has negatively impacted the quality of life of CARICOM member states. It has placed pressure on limited resources, reduced local and foreign direct investment and threatened the achievement of the developmental goals of these states.

According to the CARICOM Eye on the Future Report of 2010, the number one concern of youth is crime and violence. Sixty percent of CARICOM’s population is under the age of 30. The main perpetrators as well as the victims of crime are young people. Moreover, violence is the lead cause of death among males aged 15-24 in the Caribbean.

Not only is the incidence of youth violence increasing, but according to a 2010 regional survey in seven member states, the pattern indicates: a gender dimension to violence in which violent acts are carried out mainly by young males against other young males, and females are the main victims in situations of domestic abuse or sexual assault.

It also indicates increasing school violence, with a close connection between youth violence and violence in the community. Victimisation of youth by peers and adults is shown to often lead to more violence and a resort to violence out of fear, or in response to a perceived threat.

For the Caribbean, school remains one of the key socialising environments for their youth. According to the IADB 2012 report, “class attendance of the region’s share of elementary and secondary school-age children stands at 95.0 per cent and 73.0 per cent, respectively”.

One of the outcomes of the Youth on Youth Violence Project was an assessment of risk factors, threats for violence, protective factors and school bonding factors in the pilot schools of the selected member states. To date, 520 students have been surveyed and have also participated in various focus group discussions, with the majority of them (90%) between the ages of 11–16 years. Many were victims of bullying, classroom theft and robbery from other students.

Information from the survey revealed that violence in schools was perceived to be related to gangs moving into the schools and communities (27%); easy access to drugs and guns (14.8%); and a lack of positive activities (13.2%), among other factors. The challenges being faced in the schools and communities were very similar across states and, in many cases, pointed to issues that had to do with boredom in school, poor conflict resolution skills and a general lack of discipline.

According to the students surveyed, strategies to reduce violence in schools should include mentoring programmes for students (18%); gang prevention programmes (14.6%); parenting training (13.1%); and police presence (25%). To date, five schools have been engaged, the smallest with a population of 400 students.

For CARICOM, crime and insecurity remains one of the principal obstacles to social and economic development. Conservative estimates place annual direct expenditure on youth related crime and violence in five CARICOM states at between 2.8 percent and 4 percent of GDP.

CARICOM’s Community Strategic Plan for 2015-2019 identifies Deepening Crime Prevention Initiatives and Programmes as an area of focus to build the social resilience of the Community.

The Deepening Crime Prevention Initiatives strategy takes on board the CARICOM Social Development and Crime Prevention Action Plan 2009-2013, which provided a template for addressing the issue through a cross-sectoral and multi-disciplinary approach based on five pillars: prevent and reduce violence; foster social inclusion; promote re-integration; empower victims; and protect the environment and economic resources.

The prevent and reduce violence pillar provides the basis for the CARICOM/Spain Youth Violence Project. This pillar notes “addressing violence in school settings in the Caribbean is crucial to efforts to prevent violence in the region” and “comprehensive policies and programmes are needed to promote pro-social, non-sexual and physically non-violent environments in classrooms and throughout schools”.

The forum, which ends on Tuesday, and its follow-up will accelerate the necessary action, both at the policy and operational levels, to further the prevention of youth violence and crime agenda and help restore the Community to a place where every citizen is safe.