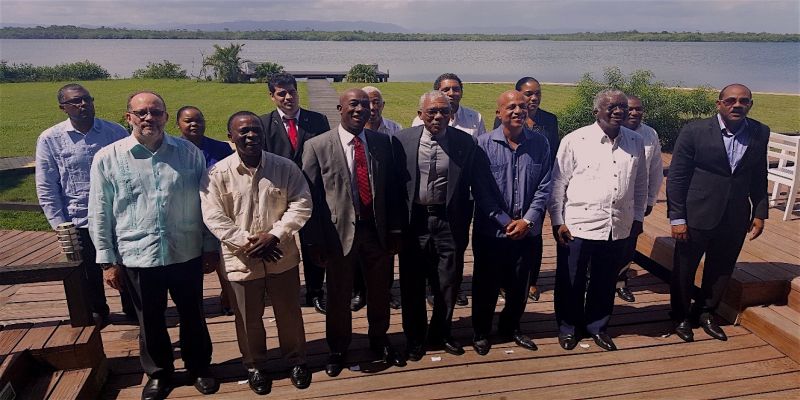 Caribbean Community (CARICOM) leaders began their two-day Inter-sessional summit on Tuesday amid concerns of slow economic growth, the global oil situation and the threat to corresponding banking in the region.

Host Prime Minister and incoming CARICOM Chairman, Dean Barrow said that the failure of the world economy to recover properly from the shock of the financial crisis that began in the last part of the first decade of this new century is still having a major impact on CARICOM countries.

He said many regional countries are still suffering from slow growth, increasing difficulties with public finances, and tremendous strains on their capacity to satisfy the life-improvement aspirations of its people.

He said even where some countries have shown substantial enough expansion, much of the net effect has been depreciated by population increases.

But he said the region’s tourism industry has shown signs of growth and that the current global oil situation can be described as “a double-edged sword for a couple of us.

“So we salute the recent petroleum discoveries in Guyana and look forward to that country being able to exploit those resources on its own terms; and we welcome the benefit to consumers that cheaper fuel has meant.

“But at the same time we regret the effect that both the contraction of production and the precipitate price drop have had here in Belize. And we note the even stronger detriment of the latter on public sector revenues in Trinidad and Tobago.”

Barrow said that the oil conundrum has severely constrained the flow of resources to Caribbean countries that participate in the in the Venezuela-led PetroCaribe arrangements, through which they acquire petroleum products at concessionary terms in addition to benefitting from loan arrangements.

“This is, of course, in consequence of the havoc done to Venezuela, the source of our erstwhile bounty. To compound matters, it is clear that the oil price phenomenon is symptomatic of the more generalized weakening…in commodities markets.”

Barrow, who was re-elected to office late last year, said the issue worsens the crisis situation in public finances in certain parts of the Eurozone, so that altogether there appears to be a distinct possibility of the world economy sliding back into recession.

“The consequences that would entail for our region are both obvious and frightening. And when we move from the general to the particular regarding global economic and financial currents, there is one already extant development with absolutely cataclysmic ramifications for us. “

Prime Minister Barrow said that the region is now confronted what he termed the “phenomenon of so-called de-risking” and that under pressure from their regulatory authorities in Europe and  especially the United States, banks in those jurisdictions have been closing their correspondent relationships with the Caribbean’s indigenous financial institutions.

“This deprives our banks of the ability to keep US deposits, do wire transfers, facilitate credit card settlements for their local clients and our economy. The implications of this for our international trade, for our remittances, for our structures of production, consumption and investment, are so obvious as to require little further elaboration.

“ It is therefore no hyperbole to say that, especially in an environment where the value of our imports and exports taken together equals or exceeds our GDP (gross domestic product), any attenuation, not to say complete cut off, respecting our trade and remittance flows, constitutes a clear, present and compendious danger. “

The CARICOM chairman said that it is in this context he as prime minister of Belize went to Washington two weeks ago “for the express purpose of taking up this matter directly with the US Regulators.

“And, truth to tell, I received much tea and sympathy. The former, in the aftermath of the historic blizzard Washington had just experienced, was welcome. But it was not immediately clear that the latter, politesse apart, sufficiently advanced matters.”

Prime Minister Barrow said that the regulators all agreed that, “absent a solution, our economies, our societies would go belly up; and conceded that could be in no one’s interest, including theirs.

“The sticking point, though, was their proclaimed inability to oblige their private sector banks to engage or re-engage with ours. So the highest expression of that sympathy …was no more than an undertaking by the US Regulators to say to their banks that our jurisdictions have done and are doing everything we can to be fully AML/CFT compliant; and that there was therefore no in principle objection to those banks doing business with us. “

But he said ultimately, the regulators insisted, it was strictly a decision for those sovereign US banks to make.

“They would have to decide whether it was in their financial interest to deal with us, assume the full transactional weight of the resulting monitoring and reporting requirements, and run the risk of nevertheless paying huge fines if anything went wrong.

“Or, the US banks could simply continue to take the path of least resistance on the basis that our minuscule margins were not worth the trouble. It could not be supposed, of course, that any thought as to the catastrophe waiting to overtake our countries would enter into those banks’ straightforward risk/reward calculus. “

Prime Minister Barrow said despite, then, verbal emollients and undoubtedly sincere protestations of concern, the limitations on action stated by the regulators seemed, “in our circumstances, to pose an uncuttable Gordian knot”.

He said soon after his meetings in Washington “ a certain article appeared in the Financial Times…on how developed country banking regulators were actively assisting Iranian banks to re-enter the global financial system following the lifting of economic sanctions.

“So the barriers on regulatory intervention are apparently far less constraining for a big country than for a small one, even when that big country has been dubbed a pariah and demonized these last few years.”

Prime Minister Barrow said in fairness to the United States authorities they have been as good as their word and have now spoken to at least one potential correspondent bank that Belize has approached.

“The outcome of that is still pending. Meantime our campaign, and I speak now of CARICOM, continues.

And it cannot be other than relentless in the face of the possible correspondent banking Armageddon that we face.

“It is therefore a matter that looms extremely large on our Agenda over the next two days, and has already been the subject of a dedicated Finance Ministers meeting,” he said, adding that without prejudice to any other recommendations that will come to us from that meeting, Belize would ofer some recommendations.

“Surely our respective country banks can get together across jurisdictions and as a bloc approach target banks in the U.S. for pooled correspondent services. That way we should be able to leverage the critical mass needed to make our business volume worthwhile in terms of the risk/reward equation.

“The modalities and logistics will take some working out but clearly are not beyond our skills,” Barrow said, telling his colleagues “I am trying to reiterate what we know only too well.

“The reality that forces us to acknowledge the limitations of individual smallness, is the same reality that obliges us to size-up both in terms of collective thinking and collective action. A precondition to this, though, is that we talk less and do more.

“Drudgery in the garret rather than flash-in-the-pan brilliance. But the times do seem to require this sort of workmanlike focus to wring from difficult circumstances the kinds of realizable, measurable objectives our people deserve.

“And on the back of sustained slogging there is quite a bit we can do for ourselves even with respect to those generally recessionary global economic conditions about which I spoke earlier. But I repeat: stock taking now for purposes of a reset requires a hard-headed assessment of where we are, where we need to go and how we get there.”

Barrow said that the Caribbean needed to settle on achievable goals for the immediate and medium term, and specify and take the necessary steps for realization on a time- and-action basis.

“In the process we may recognize, for example, that there is need for a workaround of the unbridgeable gap between our aspirations for a perfect single market and economy, and individual circumstance and sovereignty constraints.”

Stuart: CARICOM powerful as one

PRIME MINISTER FREUNDEL STUART wants the people of the region to know that when CARICOM speaks with one voice, it can be a powerful force in facilitating change, both in the region and in the international community.

His comments came as he delivered remarks on Monday at the Opening Ceremony of the Twenty-Seventh Inter-Sessional Conference of Heads of Government of the Caribbean Community (CARICOM), at the Placencia Hotel in Belize.

Referring to the vital role CARICOM played in the preparation, conduct and outcome of the landmark agreement at the 21st Conference of the Parties of the United Nations Framework Convention on Climate Change, in Paris last year, Stuart said that it was an example of what could be achieved if countries continued to find common ground.

He added: “No agreement involving in excess of 190 countries can possibly satisfy all. On balance, we in CARICOM were able to get the major breakthroughs that we wanted. I am of the view that the agreement, implemented with seriousness and determination by the international community, will allow us to address the multi-faceted challenges which climate change poses for our countries.”

The Prime Minister, therefore, urged fellow leaders to ensure that going forward all decisions made by CARICOM were both “orderly and rigorous”, so that the region’s people could fully benefit.

“Only in this way can we deliver to our peoples the regional public goods they expect as the fruits of our deliberations,” he noted.

Pointing out that leaders had adopted some clear rules to better guide the decision-making process at last year’s Regular Meeting in Barbados, Stuart disclosed while in Belize, leaders would also be considering Draft Rules of Procedure which should be adopted at the next CARICOM summit in July.

Saying he understood why some persons might consider such a development as “a minor piece of procedural pettifogging”, he pointed out that decisions made by CARICOM “must, at all times, be able to withstand the scrutiny of institutions like the Caribbean Court of Justice, that of the people of the region, and indeed, of the world”.

CARICOM leaders will not only examine procedural matters over the next two days, but will try to hammer out  a comprehensive strategy to cope with such issues as the Zika virus, Regional Security, Correspondent Banking, Citizenship By Investment, Cricket Governance, The Future of The ACP Group and Relations with The Dominican Republic, among others.