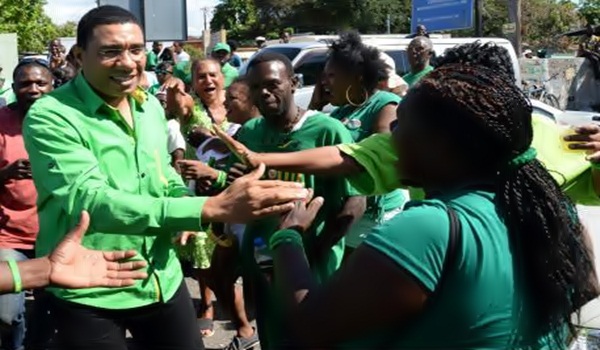 Holness yesterday launched the Jamaica Labour Party’s (JLP’s) 2016 election manifesto, describing it as “bankable” and insisted that the Opposition party’s proposal to increase the income tax threshold to $1.5 million as of April 1 this year is a way of giving back to Jamaican workers suffering from the current austerity measures.

Immediately after the launch at the Jamaica Pegasus Hotel in New Kingston, Holness, the JLP leader, and his team of candidates and spokespersons boarded a bus and travelled first to Coronation Market, downtown Kingston, where they handed out hard copies of the 58-page document to vendors and other Jamaicans on the streets of the capital city before going on to other commercial hubs, including Cross Roads and New Kingston.

However, he insisted that the JLP would want the beneficiaries to use the windfall to buy local products, in order to grow the economy.

So it is always better when you spend than when Government spends your money,” he added. Former Prime Minister and JLP Leader Edward Seaga was among the guests who also heard from former Finance Minister Audley Shaw, and former Minister of Transport and Works Mike Henry, who is also the party’s campaign director.

The glossy, green, black and gold coloured publication titled ‘Partnership for Prosperity’ focused on the party’s call for a partnership with uncommitted electors turned off by the failures of successive governments. Holness said that the manifesto has something for every sector – business facilitation; working class; the youth; children; and families.

“We are considering everyone in our plan,” he added. He also announced that the party has launched an app, JLP 2016, which is available from the Google play Store. He said that people have already started downloading the app, and they are sending their comments by phone.

“We have received close to 500 comments so far. The manifesto is there along with other interesting material,” he said as he urged Jamaicans to stay in touch through the party’s and his Facebook pages.

“We are connecting with everyone, because we want to hear what you have to say. This is how you keep government accountable to you. This is how we will not only change the government, but we will change how government works,” he stated.

He said that the party would be taking the manifesto from town to town, “giving out copies…and sharing the good news of the partnership for prosperity”.

The People’s National Party (PNP) will not participate in the national debates “at any level whatsoever”.

This is according to a letter the party’s General Secretary Paul Burke wrote to Chairman of the the Jamaica Debates Commission Noel daCosta on Wednesday.

The party’s general secretary said after taking a number of factors into account and having given Jamaica Labour Party Leader Andrew Holness “more than adequate time and opportunity” to address issues that were conditions for the PNP’s involvement in the national debates, the party had no option but to opt out of the debates.

Burke also said that based on Holness’ attitude and the fact that the PNP finds his answers to several integrity issues “lacking, unsatisfactory and not credible”, they were left no option but to decline.

The letter also said that Holness’ “obstinate refusal” to apologise to PNP President Portia Simpson Miller and for his retraction and apology for his “irresponsible and potentially dangerous” statement at Sam Sharpe Square in St James on February 7, also fuelled their decision.

“We will not compromise on our principles,” Burke noted.