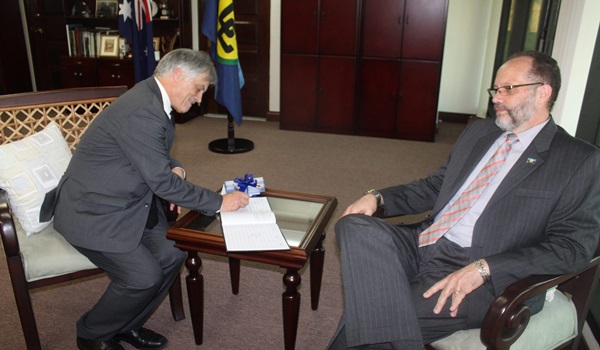 The Caribbean Community (CARICOM) and Australia continue to strengthen an already rewarding relationship, which among other things, has seen 128 CARICOM nationals benefitting from major scholarship programmes and leadership awards.

He placed on record the Region’s profound appreciation for the Australia Aid Programme support in building human and institutional capacities in the Region; its support of the Community’s response to climate change, and advocacy on the international stage on political and economic issues.

CARICOM nationals have acquitted themselves excellently in academic programmes facilitated through the Australia Aid Programme, with 100% graduate completion and return rates. The last scholar, who is reading for a PhD., returns to Guyana in 2018. Ambassador LaRocque lobbied for the renewal of the Programme to further the bonds between CARICOM and Australia.

He lauded Australia’s “sensitivity” to the realities of small states on climate change, noting its contributions to the Green Climate Fund and the Green Growth Institute, as well as significant investments to the Caribbean Community Climate Change Centre.

However, Secretary-General LaRocque urged Australia’s advocacy on the issue of graduation of small middle income countries from access to concessional funding. He pointed out that for small states to truly benefit from global arrangements for sustainable growth and development such as the 2030 Development Agenda, the Financing for Development outcomes, and the COP 21 commitments, access to development funding was necessary to bolster development efforts.

CARICOM is painfully aware of the OECD and some development partners’ policy on graduation of small middle income countries from access to such funding. GDP alone does not adequately reflect a country’s level of development, in particular among SIDS. Criteria such as vulnerability which is inherent among SIDS, must also be taken into account in order to facilitate a more realistic measure.

Already countries in Australia’s own neighbourhood such as Japan are embracing this reality. It would be a meaningful and substantial gesture if Australia were to adopt a similar position.

“We are aware that Australia is an upstanding member of the OECD Development Assistance Committee and we hope we will find an understanding ear from your country on this issue,” Secretary-General LaRocque told the new emissary.

Mr. Pilbeam recalled that his interactions with CARICOM dated back to 1977 when, in Georgetown, Guyana, he met Sir Meredith Alister McIntyre, a venerable integrationist who piloted the movement for integration as Secretary-General from 1974-1977.

Of that experience Mr. Pilbeam recalled:

Those were turbulent times and I remember discussing the travails of the post oil-shock on the Caribbean with him and being pleased that he’d made the time to talk one-on-one with me, just a Second Secretary. He must have picked up on this because when I perhaps over-thanked him at the door for our chat he said, ah, but you’re an economist.”

Almost four decades later, “CARICOM should be proud of what has been achieved in forty years,” Mr. Pilbeam stated.

He said Australia was pleased to support the Community through development packages that will be closer to $US 70M on completion. From 2010 to 2014, he said, Australia undertook its largest aid programme ever in the Region – a $US45M package. Focus has been on climate change/disaster risk reduction, economic resilience and people-to-people and institutional linkages. The Caribbean Community Climate Change Centre (5Cs); the Caribbean Regional Technical Assistance Centre; Belize (coral reef protection) and Jamaica (Montego Bay Marine Park) are among the beneficiaries of Australia’s support to the Community.