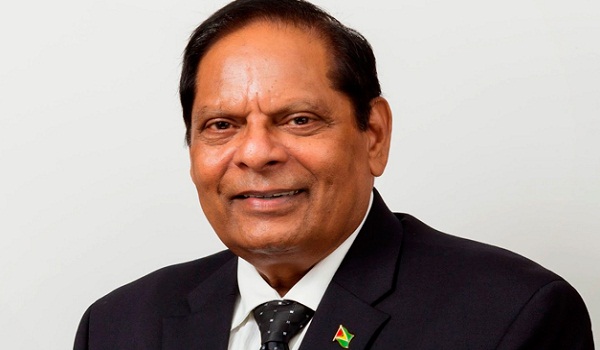 PM receives final report on constitutional reform; to take it to Cabinet soon

The final report on proposed constitutional reform, that will guide a new political culture in Guyana, has been completed, the state-run Government Information Agency (GINA) reported Saturday.

The report was handed over to Prime Minister Moses Nagamootoo on Saturday, April 30, 2016, by the steering committee that was established to define the scope of the actual reform process, and formulate the terms of reference and mechanisms for consultation to establish a Constitution Reform Commission.

Convenor, of the  steering committee, Nigel Hughes in handing over the document to the Prime Minister paid tribute to the two members, that the committee lost along the way, as a result of their sudden death; Professor Sheldon McDonald and  Haslyn Parris.

As it relates to the final report, itself, though, Hughes explained that he was not at liberty to disclose its actual content. He  however, said that the committee has submitted to the Prime Minister what he considers to be “the framework of the pathway for the constitutional reform commission,” which, he hopes will be established shortly.

Meanwhile, in receiving the report, in addition to expressing his profound gratitude to the steering committee, Prime Minister Nagamootoo also paid  tribute to the members of the committee, who passed.

“This remit was to be able to give us a direction, the scope within which the constitutional reform process should take place,” the PM said, re-stating the goal of the establishment of the committee and completion of the report.

He reminded that the coalition government  had placed high on its  agenda the issue of constitutional reform, and expressed the hope that the guidance contained in the final report would   be able to give the government both “enough time and space” in which it can achieve the areas identified as areas for reform and changing in the constitution.

“Today, I am going to try to read this (the report) and see what I would be able to do to take it forward; first to the Cabinet and then we would announce the further stages in the process,” the PM said.

A six –member Steering Committee on Constitutional Reform (SCCR) was establish by the Prime Minister in August 2015, with prominent attorney at law Nigel Hughes as the convenor. The SCCR began work on September 1, with a view to completing its work on December 31. The SCCR met the deadline by presenting to the Prime Minister the interim report. A final report should have been presented at the end of March; however, the report was delayed as a result of the sudden death of the Committee member, Parris in March.