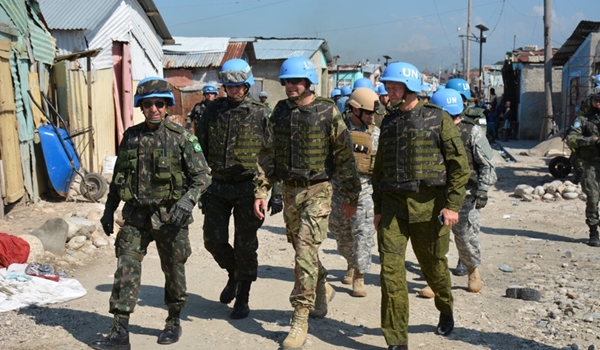 UN considers change of mandate for peacekeeping mission in Haiti

While the security situation in Haiti is “not perfect”, solid progress has been made over the past few years, the head of United Nations peacekeeping operations said, stressing that the Organization is considering a change in the mandate of the UN stabilization mission in the island nation, known as MINUSTAH.

Wrapping up a week-long visit, during which he attended the swearing in of the new Haitian president, Jovenel Moïse, and carried out an out an evaluation of the mission, Hervé Ladsous, the under-secretary-general for peacekeeping operations, told reporters in Port-au-Prince: “The military component of MINUSTAH is likely to disappear in the relatively near future. We are looking at the modalities.”

At the heart of the mission’s work is ensuring stability, he continued, noting that the recent elections had gone off with few incidents, thanks to MINUSTAH and particularly the Haitian National Police, and the Provision Electoral Council.

“I think this is something to be noted,” he said.

He recalled that, in October 2016, when the UN Security Council renewed MINUSTAH’s mandate, it had expressed its wish to examine the mandate of the mission in mid-April. The secretary-general is to make recommendations to the Security Council on 15 March.

“I think that when we look at the situation in this country compared to what it was a few years ago, we have made a lot of progress,” Ladsous said. “Security is not perfect, but I think it is much better.”

Ladsous went on to note that the regular strength of the Haitian National Police is set to reach 15,000 and that efforts will continue to strengthen the capacities of this police.