The ideas expressed in this article do not necessarily reflect Nodal’s publishing view. Nevertheless, we believe that it is important to let them known as they contribute to a comprehensive idea of the region.

To comply with an annual tradition, on 19th September, the Brazilian president, Michel Temer, opened the General Debate of the 72nd meeting of the United Nations Organization (UNO) General Assembly by means of a lecture. As it was expected, Temer referred to those Brazilian “first time” commitments with a sustainable development, specifically quoting the efforts to diminish deforestation in Amazonia, a topic that has given rise to much international criticism to his government. On the other hand, Temer did not mention any other subject which may be hard for Brazilian international diplomacy: the serious attacks to the Indigenous peoples in the country and, above everything, in the Amazonia, an area that the president usually says to be defending.

There has been a long serious criticism to violation of Brazilian indigenous peoples’ rights. But they have been intensified during the first semester this year 2017 after three special reporters from the United Nations and one from the Inter American Committee of Human Rights (CIDH, as per its Spanish acronym) visited the country.

These reporters claimed their worries about the proposals to amend the Indian National Foundation (FUNAI, as per its Spanish acronym), which is currently being discussed by Temer’s government. FUNAI is the organization which seeks to protect the indigenous peoples’ rights within the Brazilian State.

“The CPI report also remarks that the UNO Declaration on indigenous peoples is a serious threat to Brazil sovereignty and it encourages the Brazilian government to leave the OIT Agreement 169. It claims that there are certain conditions to have non-existent indigenous peoples settled in order to arbitrarily expand the Brazilian land limits”, said the UNO specialists.

It is clear that there is a current strong discussion between human rights international organizations and the Brazilian government –as well as those politic groups supporting it- on indigenous peoples’ rights in Brazil. The country had already been questioned for this reason during the process of Universal Frequent Revision of Human Rights, between 2016 and 1017. This revision is compulsory for countries signing the international agreements on human rights.

The organizations supporting the indigenous rights claim that native peoples have been victims of threats, injuries and deaths due to multiple interests on their lands. This was on the part of timber merchants, illegal miners and large landowners, particularly in the Amazonia where there is the largest part of Brazilian indigenous population.

The isolated indigenous peoples living in the Amazonia are going through a particularly worrying situation. The General Coordinator of Isolated and Recently Contacted Indians (CGIIRC, as per its Spanish acronym) of FUNAI has estimated that 103 isolated indigenous records have appeared in the Brazilian Amazonia; 26 of them have already been confirmed and 77 are dependent on some studies.

Seven out of 26 bases for the protection of isolated indigenous peoples were closed during last years; this has resulted in a higher vulnerability for native peoples in front of possible attacks. In August, there was a worldwide suspicion of a massive killing of isolated Indians undertaken by illegal miners in the Valle del Javari Indigenous Land, Amazonas State. The complaint was presented by the General Union of Indigenous Peoples of Javarí (Univaja) before the Federal Attorney General’s Office.

According to a monitoring performed by the Socio Environmental Institute (ISA, as per its Spanish acronym), one of the main organizations to protect the Brazilian indigenous peoples’ rights has shown the abrupt decrease of FUNAI’s budget which has already been reduced during last years.

In 2013, FUNAI’s budget reached a maximum of 800 million reales (US$ 255 million). Nevertheless, only slightly above 600 million reales were effectively executed. As from that moment, it continued decreasing. In 2016, the budget was reduced to 542 million reales but only 137 million were actually delivered to FUNAI by the government, as part of several social expense cutdown during Temer’s government. 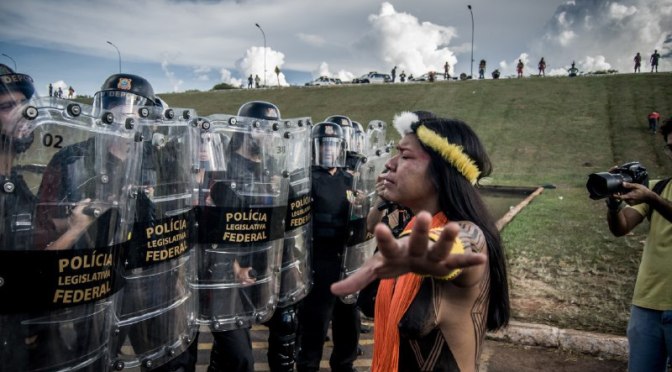 It is highly probable that, if FUNAI’s constriction policy is not changed, there will be, in the short run, a serious increase of lobbies, violence and massive killing against isolated peoples, both recently contacted and integrated. This will occur in those lands that should be protected by the State”, said to the press Fany Ricardo, a coordinator of ISA Monitoring Program. ISA has also claimed that FUNAI has been going through changes of technical trained officers by persons linked to those allied to Temer’s government in the National Congress.

Copper National Reserve and its Partners

The Catholic Church is especially worried because of the attacks to rights and personal safety of Brazilian indigenous peoples. The National Conference of Archbishops in Brazil (CNBB, as per its Spanish acronym) which gathers the local Catholic archbishops, by means of a press release on 5th September, remarked its “strong repudiation” to 9142/2017 and 9147/2017 decrees, promulgated by Temer’s government. They “extinguish” the Copper National Reserve and its Partners (RENCA, as per its Spanish acronym) where mining is forbidden or strongly limited.

The RENCA was created in 1984, that is, during the last year of a military government (1964-1984). The objective was to protect a large area in the Amazonia aimed at mining research and to keep it aside from private investment. The 47,000 km² area is located between Pará and Amapá States, in the North of the country.

“As it has not taken into consideration the indigenous peoples and the traditional communities, the governmental decision is opposite to the Federal Constitution, under its section 231. Furthermore, it is an evidence of the wicked market logics that has been being adopted by our country, to the detriment of life”, protested the CNBB Chairman, Cardinal Sergio de la Roca, Archbishop of Brasilia.

The decree 9142/2017 was published on 22nd August and permitted prívate investment in part of the RENCA territory for research and mining extraction purposes. There was a significant reaction from the public opinion, both national and international, so the government issued a new decree, 9147/2017, whereby it stated limits to private capital investment in the area and a referendum to society.

However, pro-Indian and human rights organizations continue expressing their concern because of the effects of RENCA. Two indigenous areas will be affected by the RENCA: they are the Waiãpi, in Amapá, and the Rio ParuD’Este, in Pará. There is the fear of a possible effect of RENCA on indigenous populations as well as on environmental protection areas within it. There are seven environmental protection units within RENCA; three of them are comprehensive protection units, where mining would not be permitted; the remaining four units are of sustainable use, where mining could be permitted if there were the so-called management plan.

However, the indigenous problem is in the core of actions by Brazilian and international environmental and humanitarian organizations. There is an increasing concern in other social sectors such as the Sociedad Brasileña para el Progreso de la Ciencia (SBPC, as per its Spanish acronym) (Brazilian Society for Science Progress). It discussed on this topic during the last annual meeting, last July, in Belo Horizonte, capital of Minas Gerais State.

“A series of actions by this government have made possible to stop a policy which had been in force for, at least, 14 years and have strengthened some sectors linked to agriculture and cattle business and made more flexible the indigenous peoples’ rights on land”, said to the press Ricardo Verdum, a professor of Anthropology Department of the Federal University of Río Grande do Sul (UFRGS, as per its Spanish acronym) and a member of the Indigenous Affairs Committee (CAI, as per its Spanish acronym) of the Anthropology Brazilian Association (ABA).

Brazil is in alert. The silence by President Temer at the UNO on the indigenous issue will not have a practical effect as claims will continue.