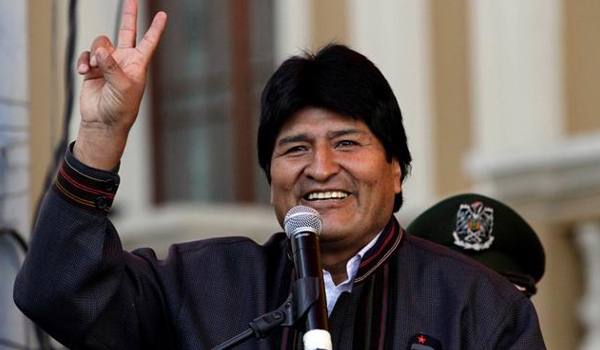 Last Sunday, President Evo Morales asserted that if he is a candidate in 2019 elections, he will win by above 70% of votes.

“We won by above 50%, 60%. If we are candidates in 2019 elections –and I am challenging right-wing parties- next time we will win by above 70% of votes; we will continue getting nearer popular democracy, the real democracy. We are not far from that”, he affirmed.

Morales remarked that his government practices the “real democracy” and not “the arbitrary exercise of power” to choose the State authorities.

“We practice democracy; here the people –and not the Congress can choose their president by means of their vote. In neoliberal governments, political parties gathered as did not have a majority and so, by making alliances and showing their fingers they proceeded to elect someone; that is the arbitrary exercise of power”, he said.

The President said he was surprised and grateful for the mobilizations supporting his re-election in 2019 and asserted that said mobilizations are on behalf of the “real democracy” unlike the 10th October meeting called by the opposing parties.

“I am surprised by mobilizations and protests by our brothers (…) Now people are really going out to defend democracy. They regret having called 10th October meeting, to supposedly defend democracy, to question the new nomination. They are rejected. Which is their morals as to defend democracy if all of them come from neoliberal governments”, he said.