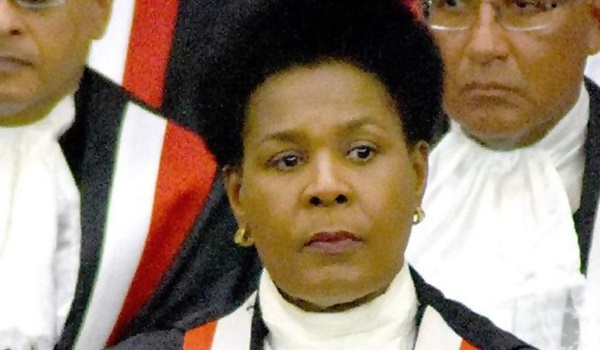 A Court of Appeal judge in the Turks and Caicos Islands, Justice Paula Mae Weekes, has been nominated as Trinidad and Tobago’s choice to replace Antony Carmona as president of the twin island republic.

If elected, she becomes the first woman to become a head of state here since the island attained political independence from Britain in 1961.

“We are hoping for a unanimous process… we all hope it will be unopposed,” said minister in the Office of the Prime Minister, Stuart Young, adding that Justice Weekes has “heeded the call for public service and has agreed when the government approached her to make herself available.

“She is most willing to put herself forward as a candidate and be nominated as a candidate for election to be the next president of the Republic of Trinidad and Tobago.”

The Electoral College meets on January 19 to elect a successor to Carmona, whose five-year term ends in March.

“We would like to thank the outgoing president whose term of office ends on March 18 “with a deep sense of gratitude, because anyone who takes a decision to give public service at any level to Trinidad and Tobago as citizens we should be grateful”.

Young told a news conference that the name of the jurist had been put forward during a meeting between Prime Minister Dr Keith Rowley and Opposition Leader Kamla Persad Bissessar on Friday.

Justice Weekes was appointed to the Court of Appeal in the British Overseas Territory in September, 2016 for a term of three years.

She could become the second prominent regional jurist to be elevated to the post of head of state, following the decision of the Barbados government to name Madame Justice Sandra Mason as the island’s eighth Governor General last week.

Justice Weekes is a former Justice of Appeal of the Judiciary of Trinidad and Tobago where she served for 11 years until her retirement in 2016. She was appointed a Puisne Judge of the Supreme Court of Trinidad and Tobago (Criminal Jurisdiction) in 1996 where she presided for nine years before being elevated to the Court of Appeal. Prior to her appointment to the Bench, Justice Weekes served with the Office of the Director of Public Prosecutions for 11 years and in private practice from 1993.

She is a graduate of The University of the West Indies and the Hugh Wooding Law School. She is a trained and experienced judicial educator, having become a fellow of the Commonwealth Judicial Education Institute in 2000. She has designed and delivered programmes extensively in Trinidad and Tobago and also in the Organisation of Eastern Caribbean States (OECS) and Jamaica over the years.

Young described the discussions between Rowley and Persad Bissessar as “productive and very cooperative”, adding that the Government was still open to leaving space on the Nomination form for the Opposition legislators to affix their signatures so as to make the election of Justice Weekes a bipartisan effort.

“The honourable leader of the Opposition said at this stage the Opposition has no nominees and of course that is always subjected to change before the deadline of 4:00 pm (local time) on Monday, January 8,” Young said.

But he told reporters when the Government announced the nomination of the jurist, Persad Bissessar asked for “some time to go back and caucus with her Opposition members.

“I can say without fear of contradiction that her reaction to the Government’s nominee was a very positive one and a very buoyant one, and then she immediately said she would need to serve the tenets of democracy and go back to the members of her caucus and have a discussion with them,” Young added.

Prior to the meeting, Persad Bissessar had told reporters that the Opposition would be willing to work with the Government to ensure that the proposed candidate for the president is a person who is impartial, will prevent excesses and abuses by the Executive, and one who will ensure that we adhere to our constitutional rights and remits.

“We look forward to having mature discussions with the Government on this most important matter that affects each and every citizen, particularly in light of the current situation in our country, where we are witnessing our institutions failing, and a Government on the verge of collapse, with the economy in decline and crime out of control,” she said in a statement.

“We must underscore the important constitutional role and functions of the president in ensuring good governance and protecting our democracy. The president’s functions include the appointment of judges and independent senators, the commander in chief of the armed forces, the appointment of members of the Integrity Commission et al, and it is imperative that the person elected to this office is impartial and independent, and possesses the strength and courage to resist any attempts at manipulation by the Government.

“The Opposition is seeking to guard against any potential abuses by this Government, which has shown that it cannot be trusted. The record of this administration is not one that commands the trust and confidence of the population,” she added.

Paula for President – who is she?

Justice Paula-Mae Weekes is the Government’s nominee for the position of President to the Republic of Trinidad and Tobago.

This was announced by Minister Stuart Young at a press conference in Port of Spain on Friday.

Young said that Opposition members has not put forward a nominee and the Opposition Leader Kamla Persad-Bissessar has asked that she discuss the issue further.

Persad-Bissessar met with the Prime Minister Dr Keith Rowley and other Government members on Friday.

Young said when the Government approached Weekes on the matter, she agreed to be nominated as a candidate for Presidency.

Young said the nomination form to be submitted to be delivered by Monday and that the Prime Minister has indicated that the Government will leave some spaces available for the Opposition to sign that form.

President Anthony Carmona will complete his term in office on March 18.

Young said that the Government hoped that the decision to have Weekes as the nation’s new President will be unanimous.

JUSTICE Paula Mae-Weekes sworn in as a judge of the Turks and Caicos Islands Court of Appeal, in February 2017, for a term of three years.

She was a former Justice of Appeal in Trinidad and Tobago where she served for eleven years until her retirement in 2016.

She was appointed judge in 1996 where she presided for nine years before being elevated to the Court of Appeal.

Before that, she served with the Office of the Director of Public Prosecutions for eleven years and in private practice from 1993.

A former pupil of the Bishop Anstey High School, Justice Mae-Weekes is a graduate of the University of the West Indies and the Hugh Wooding Law School.

How is the President elected?

The President is elected by the Electoral College voting by secret ballot.

Ten senators, the House Speaker and 12 other members of the House of Representatives make the quorum of the Electoral College.

The President would normally hold office for a term of five years.