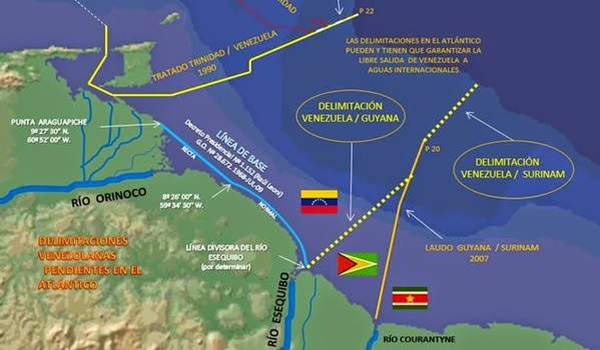 In an unequivocal rejection of Venezuela’s ongoing territorial claim on Guyana’s Essequibo region, the United States on Friday, in a message to mark the 52nd independence anniversary of Guyana, reaffirmed the US recognition of Guyana’s sovereignty over the Essequibo, which was settled by arbitration in 1899.

In his message to Guyana, recently confirmed US Secretary of State Mike Pompeo (so recent that there is no official department picture), said, “We wish the people of Guyana, from the Corentyne to the Pakaraimas, from the Takutu to the Amakura, and across the entire ‘Land of Many Waters’, a happy Independence Day celebration with peace and prosperity throughout the year to come.”

The message was clear and blunt because “Takutu, Pakaraimas and Amakura” are all in the Essequibo. It is an explicit message to Caracas that the US recognizes Guyana’s sovereignty over the Essequibo.

The message continued, “Today, we celebrate our strong connections. We look forward to advancing prosperity by helping Guyana develop its emerging oil sector in partnership with US business. We underscore our commitment to partnership via the Caribbean 2020 strategy.”

And it comes as no surprise that Pompeo issued such a firm statement because the US giant, ExxonMobil, has been awarded a lucrative oil deal after it discovered mega oil fields off Guyana’s Atlantic coast. At the same time, Guyana has openly admitted that the oil deal with ExxonMobil will ward off future Venezuela violation of Guyana’s sovereignty and Venezuelan President Nicolas Maduro’s planned adventurism.

According to industry sources, US protection of Guyana’s sovereignty was a condition of ExxonMobil’s billion-dollar investment in the offshore oil exploration and development.

Nevertheless, there is likely to be little appetite in the US for an armed confrontation with Venezuela, notwithstanding the ongoing bellicose rhetoric from President Donald Trump, and the political risks of an undeclared proxy jungle war in the region are also likely to be unpalatable.

Guyana may find therefore that it could be relying on empty promises of US assistance.

Meanwhile, Guyana is fully aware that the US has been an ally of past dictatorships in Caracas. History has shown that the next government that comes to office in Venezuela, ally or not of the US, will raise the Essequibo issue against Guyana and especially for domestic consumption.

However, based on its turbulent history of US interference in its internal affairs and anti- colonialism, the current government in Guyana knows well that Washington can’t always be trusted. Maduro in and out of office will not change Venezuela’s behaviour and Guyanese diplomats have been saying this frequently.