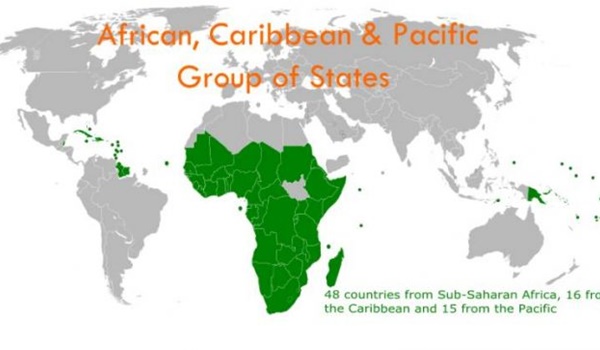 Negotiations to commence for a new ACP-EU Partnership

The heads of state or government of the 28 EU member states, constituting the European Council, have authorized the European Commission to open negotiations for a new partnership agreement with 79 countries in Africa, the Caribbean and the Pacific (ACP). The group’s secretary-general, Dr Patrick Gomes, has welcomed the decision.

The European Commission announced the Council decision on June 22, two days after the conclusion of the June 18-20 ACP-EU Joint Parliamentary Assembly, where representatives of the European Commission stressed that future partnership should be “a genuine, open and constructive dialogue, and not just going through the motions”.

The EU and ACP countries represent over 1.5 billion people from 107 countries and more than half of the UN membership. Their partnership focuses on the eradication of poverty and inclusive sustainable development for ACP and EU countries. It is divided into three key action areas: development co-operation, political dialogue and trade.

“In the overarching frame-work of the UN’s Sustainable Development Goals, where these pillars are anchored,” Gomes said, “we have embedded a core nucleus from which emanate the guiding principles and objectives of the negotiating mandate, as well as nine cross-cutting themes, which identify the mutually beneficial issues and interests that are to be thoroughly addressed as essential goals of the partnership agreement.”

“Unity in diversity is not a slogan but a reality of the rich and complex scope that sustainable development must address,” ACP secretary-general said.

The EU-ACP partnership is one of the oldest and most comprehensive legally binding frameworks of cooperation the EU has with third countries. The existing framework, known as the Cotonou agreement is due to expire in February 2020. Its provisions foresee the opening of negotiations on a future partnership by August 2018 at the latest.

According to an official EU press release, the key objective of the negotiations expected to kick off “in the coming weeks” is “to draw lessons from 43 years of EU-ACP collaboration in order to nurture the sustainable development roadmaps in place”, and build a powerful alliance in international fora.

The reference is among others to the United Nations 2030 Agenda for Sustainable Development, Paris Climate Change Agreement, European Consensus on Development, Africa Agenda 2063.

Commissioner for International Cooperation and Development, Neven Mimica, said: “We are ready to embark upon a modern and dynamic partnership with our partners in Africa, the Caribbean and the Pacific. This new partnership will be a powerful tool to jointly tackle global challenges – from fighting poverty and inequality to peace and security, from climate change to sustainable growth for all.”

The other key objectives of the negotiations are:

– To secure a new legally binding framework adapted to today’s realities based on a modern and forward-looking agenda.

– To develop a more tailored approach to Africa, the Caribbean and the Pacific.
The raison d’etre of a new EU-ACP partnership “based on a modern and forward-looking agenda” is that the world has changed considerably since the Cotonou Agreement was adopted almost two decades ago.

Global and regional contexts in Europe, Africa, the Caribbean and the Pacific have evolved significantly – and so have the common global challenges to be addressed and opportunities to be grasped. This calls for the core objectives of the partnership to be reviewed to adapt to the new realities. The EU is therefore seeking to break from the past, paving the way to new dynamics and cooperation going beyond the traditional development dimension.

Official sources say that by setting up a powerful political alliance, the EU and its partners would be in a position to develop solutions to the challenges faced in each region. These include growth and job creation, human development and peace, migration and security issues. Many of today’s challenges of a global dimension require a concerted, multilateral approach, in order to achieve tangible results.

“As it was shown in 2015 with the setting up of a successful coalition that ultimately led to the conclusion of the Paris Agreement on climate change, the EU-ACP partnership has the power to provide valuable responses to global challenges,” says the European Commission in a background paper. “If we join forces, we can form a majority worldwide as the EU and ACP countries represent more than half of the UN membership. Together, we can make a difference and set a global agenda in international fora,” it adds.

The growth of regional bodies has been a significant trend since the 1990s. Across the ACP countries, numerous regional organisations have emerged and some have become key actors in international relations, with the African Union, the Pacific Islands Forum and CARIFORUM especially strengthening their respective role, as well as sub-regional organisations in Africa including amongst others the Economic Community of West African States (ECOWAS) and the Southern African Development Community (SADC).

The EU and the ACP countries will continue to rely on a multi-level system of governance that allows taking actions at the most appropriate level – national, regional, continental or ACP – in line with the principles of subsidiarity and complementarity, according to the European Commission’s background paper.