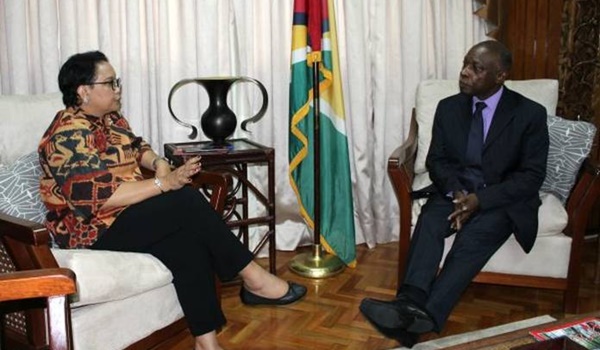 As Guyana continues to draw global attention as a result of massive oil and gas discovery, the country is set to see production start in 2020 and “as small countries, we need as many friends abroad as possible to survive,” the foreign minister of Guyana, Carl Greenidge, told the media last week in Georgetown.

This move is to protect Guyana’s sovereignty amidst Venezuela’s renewed claim to two-thirds of the country’s territory. By forging strong alliances through multilateral forums and bilateral ties, Guyana is hoping to raise its global diplomatic profile and, to this end, will open new embassies and consulates in new “frontier” areas of the world – Asia and Africa especially, Greenidge said.

Where there are no diplomatic missions or consulates, Greenidge said the “the intention is to try to establish them, whether it is by way of ambassadors or honorary consuls.”

Greenidge revealed that Guyana is exploring the opening of a diplomatic mission in Jakarta, Indonesia, and in West African countries such as Togo, Senegal and Côte d’Ivoire by establishing consulates.

Guyana will soon sign diplomatic ties with a number of French West African countries with which it has cordial ties but not formal diplomatic relations.

The Asian giant, Indonesia, has an embassy in Suriname that serves Guyana. Guyana’s two embassies in Asia are in China and India. So this is why an embassy in Jakarta can serve the Far East. Indonesia is a founder of the Non-Aligned Movement (NAM), the G77 and the Organisation of Islamic Cooperation (OIC).

Indonesia and Malaysia are assisting Guyana and Suriname in expanding their agriculture and tourism sectors through “reverse-linking”, a South-South technology and capacity cooperation through the Islamic Bank.

During a visit to Guyana in May, the foreign minister of Indonesia, Retno Marsudi, was assured by President David Granger that “Guyana remains open to Indonesian investment, especially in value-added manufacturing, agro-processing and within the sugar industry.”

“Today, Commonwealth countries impose visa restrictions. We would like to revisit that so that we can have an easier interface with which we share a lot of institutional and cultural commonalities in the past,” Greenidge said.

While Greenidge talked about “economic diplomacy”, Guyana has struggled to make it a reality due especially to the lack of capacity, skills and finances.

In the Caribbean, Guyana has stepped up diplomacy by the opening of embassies and consulates. Guyana will also open a consulate in Jamaica, Greenidge revealed.