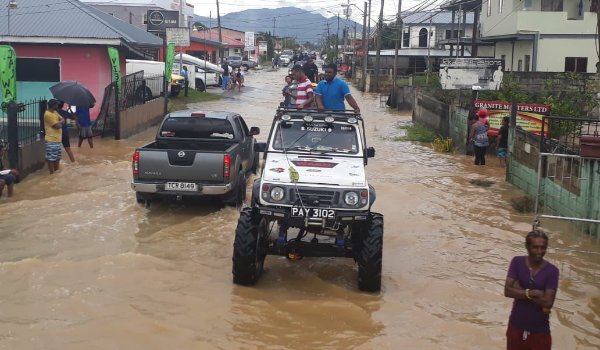 “Some of the out­skirts are still af­fect­ed but most are not,” Young said.

In terms of the Uri­ah Bul­ter High­way, which was im­pass­able in the stretch from the Ca­roni Bird Sanc­tu­ary to just be­fore Munroe Road Fly­over head­ing south for most of the week­end, Young said the north­bound lane near to the Ca­roni Bird Sanc­tu­ary was cleared and still be­ing used as a dual car­riage­way. He said the south­bound lane on­ly had a small amount of wa­ter and that the T&T Po­lice Ser­vice (TTPS) had opened it to high ve­hi­cles.

Young warned cit­i­zens liv­ing along Trinidad’s east coast that about one to two kilo­me­tres of the Man­zanil­la-Ma­yaro Road was still un­der wa­ter.

Asked whether he no­ticed if riv­er lev­els had dropped dur­ing his aer­i­al tours of the af­fect­ed ar­eas, Young said yes.

How­ev­er, he not­ed that it was up to the T&T Me­te­o­ro­log­i­cal Ser­vice to de­ter­mine if the coun­try’s red-lev­el river­ine flood alert was to be lift­ed over the next few days.

RBC Royal Bank has announced a $300,000 donation to the TT Red Cross in support of relief efforts following devastating floods over the weekend.

“Helping our clients thrive and communities prosper is at the core of everything we do, and helping those who have been impacted by this weekend’s floods is a natural extension of that commitment. That is why we are happy to make this donation to the Red Cross,” said Gretchen Camacho-Mohammed, Managing Director, Trinidad and Tobago, RBC. “We will continue to support our clients, our communities, and our employees as they begin the recovery process.”

People can also make donations to the TT Red Cross at any RBC Branch. If RBC clients have been affected and have financial questions they can visit their local branch and speak to an RBC representative, the bank said.

“We are proud of our role in the community as a supporter of growth and opportunity, added Camacho-Mohammed. “This includes being there when times are difficult. We encourage everyone who can to support flood relief efforts. Everything makes a difference and will help make our communities safer, stronger, and more resilient than before.”

To help ensure the safety of our employees, clients and neighbours during this time, RBC is reminding all residents in affected areas to listen to local authorities and visit the website of the government’s Office of Disaster Preparedness and Management at http://www.odpm.gov.tt/ for up-to-date information.

The Ministry of Health is responding to reports of the death of a resident of Greenvale Park, La Horquetta, as a result of the severe flooding in that area.

The Ministry said that as of Sunday, its surveillance system has not produced any confirmed reports of death due to the current flooding.

The Ministry urged members of the public to support relief efforts and refrain from spreading rumours of this kind.

“Public health officials and NGO bodies are going beyond the call of duty to offer care and service to those in need. Rumours of this kind thwart the efforts of the medical support team as resources must be re-directed to investigate each allegation” said the Ministry.