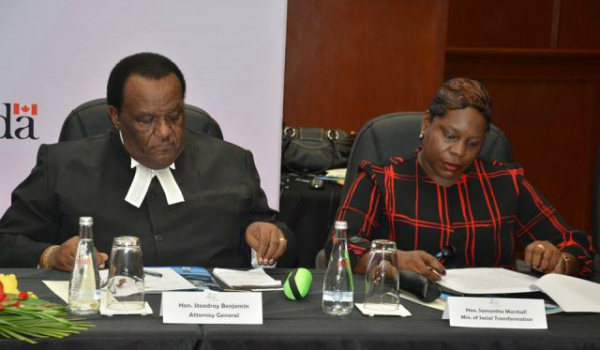 Chief Justice of the Eastern Caribbean Supreme Court, Dame Janice Pereira told the ceremony that the specialisation of the court will help to improve overall efficiency in the judicial system.

“There can be no doubt, given the prevalence of sexual offences in our region that the establishment of a specialist court to treat with such offences would improve the capacity of the court to deliver gender responsive and customer focused services to the people we serve”.

She said that the court, an initiative of the Trinidad-based Caribbean Court of Justice (CCJ) Judicial Reform and Institutional Strengthening (JURIST) Project, will have the ability to operate with enhanced video and audio links for the conduct of any trial “in an atmosphere which promotes fairness rather than one where a witness may feel loss and afraid”.

She said Antigua and Barbuda was chosen for the site of the model court for a number of reasons including the strides made by the island in addressing sexual abuse cases.

High Court judge, Justice Ian Morley, told the launch that cases before the sexual offences model court would be finished “ideally within 18 months of charging a defendant.

“Gone will be the days of cases often taking four years or more,” he said.

The new court is intended to handle the sensitive nature of sexual offences cases and Justice Morley noted that there would be greater support for complainants, better communication with them and more efficient processing of paper work by the police.

Attorney General Steadroy Benjamin said that the Antigua and Barbuda government has already made the changes necessary in law to ensure that the court is operational here.

He said the government had allocated EC$99 million (One EC dollar=US$0.37 cents) for legal and justice affairs in the 2019 national budget “because we understood the necessity of providing the supporting services in all areas with respect to the administration of the law”.

He said the government last year introduced the Criminal Prosecution Service headed by the Director of Public Prosecutions and that two lawyers have been recruited to that department to be “trained to deal with the sexual offences court”.

He said in an effort to support the new court, the government will introduce a forensic lab, noting “we have suffered over the years where bits of evidence sent overseas for testing take years to return to Antigua. That will be something of the past”.

Donate At Caribbean News Service, we do not charge for our content and we want to keep it that way. We are seeking support from individuals and organisations so we can
continue our work & develop CNS further.