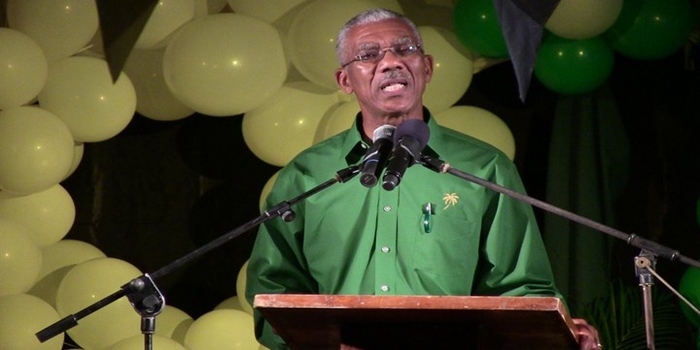 Cognizant of the fact that the matters before her are all of national interest, Chief Justice Roxane George announced yesterday afternoon that by the end of this month, she will rule on all applications related to the no-confidence motion.

That motion was passed against the government on December 21, 2018.

First to file a court action on the passage of the no-confidence motion was private citizen Compton Reid, who through Senior Counsel Neil Boston, is challenging the validity of the no-confidence motion on the basis that expelled Alliance For Change (AFC) parliamentarian Charrandass Persaud was not qualified to vote, since he is a citizen of Canada.

During a case management hearing yesterday, the Chief Justice said that it is unlikely that she will grant a conservatory order requested by Reid for the President and Cabinet to remain in office since the court is moving apace with the matters.

In relation to this application, the Chief Justice granted permission to Attorney General Basil Williams to make submissions in relations to Article 70 of the Constitution of Guyana, which according to him, provides for government to run its five-year course.

The Court granted Opposition Leader Bharrat Jagdeo and General Secretary of the A Partnership for National Unity (APNU), Joseph Harmon, approval to join in Compton Reid’s application as interested parties. A similar request made by Attorney-at-law Saphier Husain was thrown out by the court.

Additionally, Attorney-at-law Christopher Ram, had petitioned the High Court for a declaration that the no-confidence motion was properly, validly and lawfully passed by the National Assembly.

Through his Attorney-at-law Kamal Ramkarran, Ram is also seeking a declaration that the passage of the no confidence motion requires the resignation of the Cabinet including the President with all convenient speed.

In these proceedings, the Attorney General and Leader of the Opposition Bharrat Jagdeo have been listed as the Respondents. Parties in this matter will return to court on January 23 to present oral arguments.

In seeking permission to join in Reid’s case, among other things, Jagdeo in his application had noted that he wants to join the proceedings because “the main thrust of the proceedings filed” by Reid is to invalidate the no-confidence motion.
He said that Reid also wants to ultimately prevent its constitutional consequences” – resignation of the President and Cabinet, calling of general elections in 90 days or having the House extend that period by a two-thirds majority.

Meanwhile, Ram wants the court to declare that the government comprising 33 elected members of the National Assembly coming from the coalition between A Partnership for National Unity (APNU) and the Alliance for Change (AFC) elected at elections in 2015—excluding the Cabinet including the President who shall resign with all convenient speed—shall remain in office until after the President takes the oath of office after elections to be held within 90 days from December 21, 2018 or within such extended period as the National Assembly shall determine by resolution support by not less than two-thirds of the votes of all elected members.

It is Williams’s contention that the National Assembly of Guyana comprises 65 members and that mathematically, half of all the elected members of the current National Assembly would result in a fraction of 32.5.

In the instant case as half of 65 results in the fraction of 32.5, that figure should then be rounded to the next whole number being 33, which would now represent half of the elected members, the majority thereby being a number greater than half means that ‘1’ ought to have been added to the whole number ‘33’ to calculate an absolute majority of 34, the government contends.

SECRETARY-GENERAL of the Caribbean Community (CARICOM), Irwin LaRocque says the democratic process is at work in Guyana and urged that the court be allowed to make its ruling in the no confidence vote case.

LaRocque spoke to members of the media mere hours before the High Court had the first hearing into the matter. “It is my understanding that the courts are beginning to hear arguments….The matter is before the courts and I think we should allow that discussion of that litigation to go through and see what is the outcome,” he said at the time.

However, he also posited: “I am sure the court in its wisdom…will rule appropriately. My concern is that it be done swiftly, that the matter is before the court and let the court act swiftly.”

A few hours after LaRocque’s comments, Guyana’s Chief Justice (ag) Roxane George-Wiltshire heard two fixed-date applications which challenged passage of the motion. A petition was also filed that the motion was validly passed. The chief justice committed to making a ruling in the matter by the end of January. The secretary-general recently met with Prime Minister Moses Nagamootoo and was briefed on government’s plans following the no-confidence vote of December 21 last. LaRocque also met with Leader of the Opposition Bharrat Jagdeo and was briefed on the arguments being put forward by the People’s Progressive Party/ Civic (PPP/C) in support of the vote.