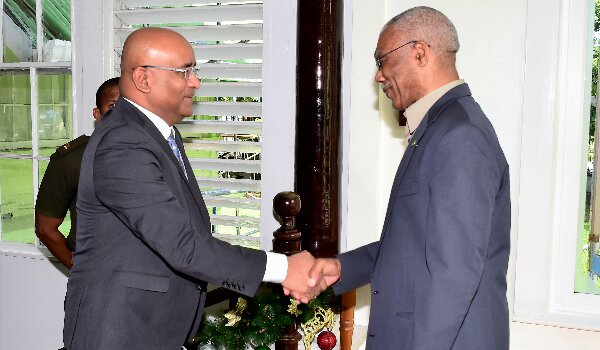 Compliance with Guyana’s constitution in relation to the no-confidence motion and preparation for free and fair elections are the main issues that will be placed on the table by the Opposition Leader Bharrat Jagdeo when he meets with President David Granger on Wednesday.

A no-confidence motion against the Granger administration was passed in the National Assembly on December 21, 2018. A citizen has since challenged the validity of the ‘passed motion’ on the basis that then government Member of Parliament Charrandass Persaud breached the constitution by having dual citizenship, and as such, his vote in favour of the motion is null and void.

The President and the opposition leader have agreed to meet, nonetheless. Ahead of Wednesday’s meeting, the opposition leader in a statement noted that immediately after passage of the motion, he had urged that the country’s leaders see it as an opportunity to discuss preparations for elections in compliance with the constitution; but also given that all the parties have constituencies, to start exploring post-elections possibilities of working together in the interest of Guyana.

Jagdeo said he stands by his statements. He noted that the opposition will remain open-minded on issues of governance.
Article 106 (7) of the Constitution of Guyana states, “Notwithstanding its defeat, the Government shall remain in office and shall hold an election within three months, or such longer period as the National Assembly shall by resolution supported by not less than two-thirds of the votes of all the elected members of the National Assembly determine, and shall resign after the President takes the oath of office following the elections.”

The meeting will be held at the Ministry of the Presidency next week Wednesday to discuss certain mutually pertinent matters.
Jagdeo had approached Minister of State Joseph Harmon to arrange a meeting with the President after the motion was declared carried by the Speaker of the National Assembly, Dr. Barton Scotland.

However, with the President still receiving medical treatment at the time, Harmon by way of a letter responded to the request, indicating that the President has advised that such a meeting could be facilitated in early January. The date of the meeting was confirmed days ago.

“I refer to my letter you dated 2018-12-22 and now confirm that His Excellency the President will meet with you on 2019-01-09 at 11:00hrs at the Ministry of the Presidency,” the letter began, adding: “It would be appreciated if you indicate the matters you wish to place on the agenda for the said meeting.”