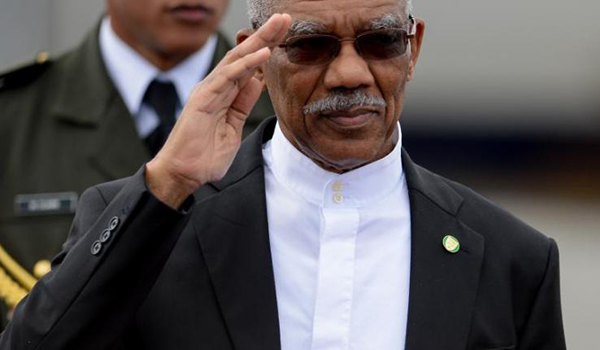 In landmark rulings, the Caribbean Court of Justice (CCJ) this morning declared the December 21 No Confidence motion was validly passed and the appointment of retired Justice James Patterson as chairman of the Guyana Elections Commission, (GECOM) is illegal. Both rulings, represent a loss for the Coalition Government in two matters which have significant bearings on the nation’s political future.

In accordance with the law governing no confidence motion General elections should have been held within three months after the motion had been passed on December 21, 2018.

As such in delivering the judgment, CCJ President, Justice Adrian Saunders urged the parties involved in the matter, to engage with each other and come up with a consensus that the final Appellate Court can make consequential orders on the way forward.

Over the past few months, both matters have garnered much public attention given their effect on whether the nation will have early elections. Guyana’s political opposition, the People Progressive Party (PPP) had moved to the Courts to challenge the ruling APNU /AFC party on key decisions relating the governance of this country which is on the verge of becoming an oil rich nation. In the first case set for determination by the CCJ, PPP Member of Parliament, MP Zulfikar Mustapha, had raised legal arguments against the validity of the unilateral appointment of GECOM’s chairman.

In the case of the no-confidence motion, the government approached the courts after it was defeated with 33 votes when the then government parliamentarian, Charrandass Persaud, voted with the Opposition. The vote was initially accepted by the Speaker of the National Assembly and the Government conceded its defeat but later pursued litigation.

Address to the nation by President David Granger

The no-confidence motion in December 2018, and the independent legal processes in the courts that followed it, have been of utmost importance to me and the Government.

We respect the legal process and the decision of Caribbean Court of Justice as well as the Constitution of the Cooperative Republic of Guyana.

We did not believe that the no-confidence vote was valid and neither did we believe it reflected the will of Parliament or the Guyanese people. We will, however, accept, and abide by, the Court’s decision.

It is now clear that the Guyanese people need certainty about the future and a way forward. I want to outline a clear path.

It is essential that we hold fair, free and credible elections. We cannot proceed on the current list of voters. It is outdated and corrupted. It may hold as many as 200,000 incorrect entries. What’s more, those who have reached the age of 18 years since the last election are not on it.

The Constitution entitles all citizens over the age of 18 the right to vote. It is a democratic imperative that house-to-house registration be completed swiftly so we can have an election at the earliest opportunity.

The Chairman of the Guyana Elections Commission, Justice Patterson, has previously informed me that the Commission will be ready to hold elections in November 2019. This will be after the completion of house-to-house registration. I now await a recommendation for a specific date from GECOM and I will then issue a proclamation.

We will be heading to the polls and there’s going to be a crucial choice for our citizens.

A choice to decide the future of our country and, most importantly, the future with regard to jobs, living standards, and education for our children.

The International Monetary Fund (IMF) has recently indicated that Guyana is on the right path in respect to our management of Guyana’s oil resources.

Guyanese will be given the choice to elect a government they trust to continue on this path, to keep Guyana moving forward, to secure a better life for every family with the united APNU+AFC coalition, or risk our future by returning to the past.

Guyana, since my election in 2015, has been moving in the right direction after 23 years of stagnation under successive PPP administrations.

Significant progress has been made. But real change is neither quick nor easy to come by.

There is still a lot more to do.

I will devote all my energies until the forthcoming election to serve our people and our country and deliver good governance.

Guyanese can confidently expect to live in a country that is moving forward; with communities that are safer; in a society that is more cohesive; with better infrastructure, greater access to quality education and an economy that is more resilient – providing better jobs.

We are on the right path.

When the election comes, I urge all our people, of whatever background, to support me and the APNU+AFC coalition to give us the opportunity to secure the best future for Guyana.

I call on all Guyanese to remain calm and I assure you that the Government will abide by the Constitution of the Cooperative Republic of Guyana.