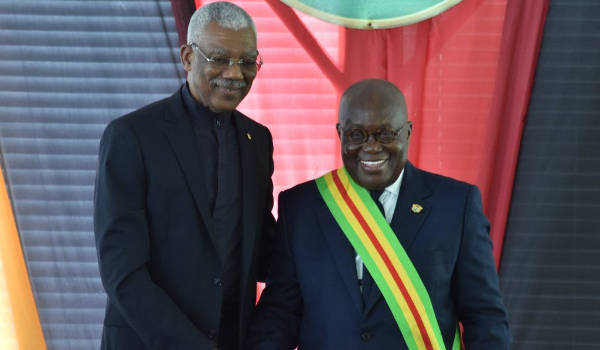 Ghana’s President, Nana Akufo-Addo has agreed that his country would help Guyana’s energy sector, Director-General of the Ministry of the Presidency, Joseph Harmon said.

Briefing the media after Akufo Addo was conferred with Guyana’s national award, the Order of Excellence by President David Granger, Harmon said the technical assistance cooperation would be provided free of cost. “This is very important to us because what they did was to commit to pay the salaries, the transportation and everything to get the people here and all that we will need to do is to find accommodation for them,” he said.

Currently, Guyana’s oil and gas sector is being managed by the Ministry of the Presidency’s Department of Energy with the President as the Minister of Petroleum.

Ghana, from where thousands of enslaved Africans were taken to Guyana during the period of European colonisation, is a young oil-producing nation. The two countries also share similar geological, geographical and climatic features.

Harmon said Ghana and Guyana have also agreed to abolish visas for hassle-free entry for up to 90 days by holders of regular passports.

The Director-General announced that several trade agreements were inked by representatives of the two countries during the visit by the Ghanaian President.

Plans are also in the pipeline to have five-hour direct flights between Georgetown and Accra, instead of a minimum of 13 hours via Europe, Harmon reiterated.

President Granger said the Order of Excellence was conferred on President Akufo-Addo for “his dedication and commitment” to the Commonwealth of Nations, Organisation of African Unity, Economic Community of West African States and “for his unflinching support for the rights of developing States” such as those in Africa, Caribbean and the Pacific. “Developing countries look to his continuing leadership and stewardship in the protection of their gains and in securing their future. Guyana regards him as a dear friend and as a brother”.

President Akufo-Addo, in response, said “I am, of course, extremely appreciative and very grateful…and I am very, very concerned about how the two of us and our two countries can work together to promote the welfare and interest of our peoples”.

The Ghanaian President was Tuesday expected to visit the Demerara Distillers Limited and Banks DIH Limited distilleries because the Ghanaians have “an interest in our rum industry”, as well as “our wood” with a view to being sold in Ghana where there has been deforestation.

The President of the Republic of Ghana, Nana Akufo-Addo paid tribute to the founders of the Non-Aligned Movement and Kofi, who led the ‘Great Rebellion’ of 1763, with floral tributes at the Non-Aligned and 1763 Monuments, Georgetown.

According to the Department of Public Information (DPI), the Ghanaian President, who is in Guyana for a two-day state visit, this morning, was accompanied by Minister of Foreign Affairs, Dr. Karen Cummings and Ambassador Dr. Timothy Critchlow.

The Non-Aligned Monument was unveiled by His Excellency, Arthur Chung, the first President of Guyana, in honour of the founders of the Non-Aligned Movement; these founders are; the Presidents of Egypt, Ghana, India and Yugoslavia.

The monument also commemorates the 1972 Conference (August 8-11) of Foreign Ministers of Non-Aligned countries, the first of its kind to be held in Guyana. It consists of four busts, sculpted to the likeness of each of the founders of the movement.

Following the floral tribute at the Non-Aligned Monument at Company Path Gardens, President Akufo-Addo was then escorted by Dr. Cummings to the 1763 Monument, Square of the Revolution, Brickdam, where he was received by Chairman of the International Decade for People of African Descent, Vincent Alexander.

The Ghanaian head of state laid a floral tribute at the monument which was built to commemorate the 1763 revolt, also known as the ‘Great Rebellion’, which occurred on Plantations in the Berbice River.

The revolt began on February 27, 1763 and is considered to be the first major attempt by enslaved Africans to fight for their freedom. During the revolt, an enslaved African named Kofi from plantation Lilienburg led in the organisation of military attacks on several plantations.

Some features of the monument include the pouting lips which symbolise the resistance to oppression. The shield-like face on the chest represents a spiritual guard against enemies, while in the hands of the sculpture, a pig and dog being squeezed symbolise the greed, lust and ignorance against, which we should constantly fight. The map of Guyana carved on the back of the structure is a representation of the peoples of Guyana.

President Akufo-Addo will meet with President David Granger at State House, where bilateral discussions will be held between the two heads of state, then the signing of bilateral agreements.