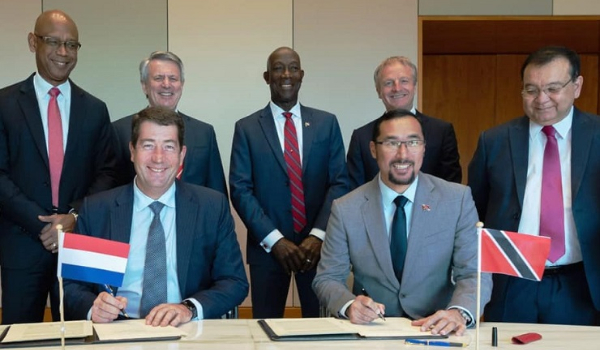 Trinidad and Tobago has signed a new deal with energy company Shell that the government says will give the twin-island republic increased revenues from the sale of liquefied natural gas (LNG).

“This new agreement is a significant milestone for the people of Trinidad and Tobago as it features an enhanced revenue package for the sale of LNG. The energy deal is the result of months of positive and relationship-building discussions between Shell and the Government. The agreement reflects the mutual importance of the relationship and the value Shell has placed on Trinidad and Tobago as a province,” a statement from the Office of the Prime Minister said, although it gave no further details about the agreement.

It added that the parties have committed to continue their discussions surrounding the development of the energy sector in Trinidad and Tobago.

Trinidad and Tobago’s Minister of Energy and Energy Industries, Senator Franklin Khan, signed the agreement on behalf of the Government while Derek Hudson, Vice President and Country Chairman of Shell Trinidad and Tobago, signed for Shell.

Later in the day, the Prime Minister visited the Shell Technology Centre in Amsterdam where he toured the facility and received an update on the latest technology being developed and deployed across Shell, and specifically in Trinidad and Tobago, to leverage improved returns in the energy sector.

After leaving the Netherlands, the Trinidad delegation returned to London where they met with a high-level team of British Petroleum (BP) executives.

The Government said the 90-minute meeting at the company’s headquarters was “informative and productive”.

“The parties had a very frank and detailed conversation about BP’s developmental plans for Trinidad and Tobago,” it said.

“There were discussions around BP’s recent drilling programmes and the future of LNG production in Trinidad and Tobago. BP also provided an update on their short and medium-term exploration and production gas programmes.”

Both sides reaffirmed their commitment to the growth of the energy sector in the twin-island republic, and scheduled negotiations which are expected to begin in the middle of June in furtherance of specific objectives relating to the restructuring of Atlantic LNG – which produces LNG from natural gas delivered from fields in and around Trinidad and Tobago –, acceleration of field investigation, exploration, production as well as discussions surrounding a large number of exploration and production licences.