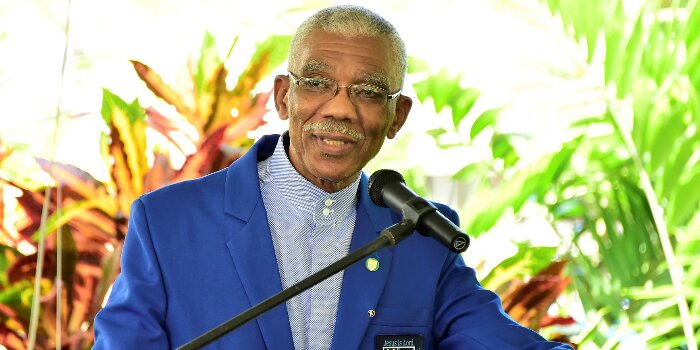 President David Granger on Wednesday announced that general and regional council elections could be held as early as March 2020, but his administration will be seeking an extension of the life of his administration when Parliament reconvenes on October 10, 2019.

“I am pleased to announce that, after discussions with Chairman of the Elections Commission and with my Cabinet, the earliest possible date for the holding of General and Regional Elections will be on Monday, 2nd March 2020.

The Constitution at Article 106 (7) states, “Notwithstanding its defeat, the Government shall remain in office and shall hold an election within three months, or such longer period as the National Assembly shall by resolution supported by not less than two-thirds of the votes of all the elected members of the National Assembly determine, and shall resign after the President takes the oath of office following the election”.

The President did not announce the dissolution of Parliament and name a definitive date for Guyanese to cast ballots to elect a government of their choice.

The opposition People’s Progressive Party Civic (PPPC), in an immediate reactuon, slammed Mr. Granger for attempting to legitimize his administration. Noting that the President gave no definitive date for elections, the PPP said only a signed proclamation declaring a definitive date for the polls would be credible.

The PPP says a return to the National Assembly is wholly unnecessary for him to discharge his constitutional duty to proclaim a date for Elections and dissolve Parliament. That party also says it is not linked to a requirement for GECOM to be ready for Elections.

The PPP says it is convinced that President Granger’s call for a return to the National Assembly “is an attempt to blackmail the Parliamentary Opposition into extending the life of his illegal government, so that he can secure some legal cover for the many illegal acts and grasps for some level of respectability.”

New York-based Political Science Professor, Baytoram Ramharack says he is unsure what the President really means because it is clear he did not announce a definitive election date, but merely stated what was the earliest date possible and that his administration would be asking the 65-seat House for an extension of the life of his administration. “I’m not clear if he is saying that March 2nd is the elections because in that statement he is saying that the Parliament will have to convene so I’m guessing he is looking to the opposition to join him and give him that two-thirds extension and then I am thinking he will then name an election date after that,” Ramharack told Demerara Waves Online News.

He said the President’s address now opens up the door for greater political instability and investor uncertainty. Professor Ramharack said Guyana could see intensified foreign pressure to establish a firm date through bargaining by the two major political parties. “I would advise the PPP to continue the protest until clarity is obtained on what that statement actually means,” he added.

Arizona-based Guyanese Political Science Professor, David Hinds said “I am not surprised at the date” and Guyanese could now look forward to polling day, despite the fact that the upcoming six-month campaign would be the longest ever in Guyana’s history. “I don’ think this government had any interest in delaying elections further than when it was due. Circumstances got us to this point and they were prepared to go to elections in December and the PPP didn’t want to play politics,” he said.

Hinds reasoned that Article 106 (7) was activated “even though the PPP did not go to Parliament to formally activate it so that’s why we’re here where we are so I do not think that it was the push back from the international community.” He said the United States, United Kingdom, European Union and the Commonwealth gave the government a “slap on the wrist” because they did not want to appear biased.

Opposition Leader Bharrat Jagdeo could not be reached for comment and PPP presidential candidate, Irfaan Ali did not return a promised telephone call.

Following is the full text of Mr. Granger’s address:

The Government, since the passage of the no-confidence motion in the National Assembly on 21st December 2018, has respected the decisions of the Courts and upheld the Constitution.

We challenged the validity of the no-confidence motion and defended the challenge to the constitutionality of the appointment of the Chairman of the Elections Commission.

The legal processes were neither frivolous nor aimed at delaying the consequences of the no-confidence motion. They sought to clarify and interpret the Constitution and to ensure that General and Regional Elections would be conducted on the basis of a credible list.

I have complied with the rulings of the Courts, upheld the Constitution of Guyana and respected the National Assembly at all times.

I engaged the Elections Commission from February 2019 repeatedly. I insisted that credible elections be held at the earliest possible time. Credible elections are essential to representative democracy.

I convened a meeting of available Cabinet ministers that very day, within hours of receiving her advice, to discuss the timeline provided to me by the Chairman.

A second meeting of the full Cabinet was held yesterday, 24th September 2019, when all members accepted the advice provided by the Chairman of the Elections Commission.

Cabinet ministers also benefitted from the advice of Attorney General and Minister of Legal Affairs Mr. Basil Williams and were guided by the need to adhere scrupulously to the advice of the Elections Commission.

I met Chairman of the Elections Commission, Justice Singh, this afternoon Wednesday 25th September, when she discussed the statutory timelines for the upcoming General and Regional Elections

Guyanese, Guyana will observe its 50th anniversary as a Republic on Sunday, 23rd February 2020. The following day, 24th February 2020 will be a national holiday.

I am pleased to announce that, after discussions with Chairman of the Elections Commission and with my Cabinet, the earliest possible date for the holding of General and Regional Elections will be on Monday, 2nd March 2020.

The Constitution at Article 106 (7) states, “Notwithstanding its defeat, the Government shall remain in office and shall hold an election within three months, or such longer period as the National Assembly shall by resolution supported by not less than two-thirds of the votes of all the elected members of the National Assembly determine, and shall resign after the President takes the oath of office following the election”.

The extension of a period beyond three months for the holding of an election is related to the Elections Commission’s readiness to hold the elections. The Government of Guyana must, as a consequence, return to the National Assembly to request an extension. The National Assembly reconvenes on 10th October 2019.

The Constitution at Article 61 states: “An election of members of the National Assembly under Article 60 (2) shall be held on such day within three months after every dissolution of Parliament as the President shall appoint by proclamation.”

The Constitution at Article 70 (2) states further that: “The President may at any time by proclamation dissolve Parliament”. The Constitution at Article 73 (2) provides that: “Elections of members of regional democratic councils shall he held and the councils shall be dissolved at such times as subject to paragraph (3), the President may appoint by proclamation.”

Guyanese can now look to the Elections Commission to conduct credible elections within the timeframe prescribed.

Guyanese, We are on the right path to preserve our precious parliamentary democracy.

Thank you and may God continue to bless Guyana.