Justice Singh suspended the process until she receives the written judgement of the court.

“There was a stoppage and during that, the Chair came and addressed the gathering (of Observers and Party Agents). She indicated that she did not receive the judgment and as a consequence, she caused a cessation of the process until she receives, digests (the Court’s ruling) and determines the way to proceed. She indicated once she receives the judgement she would determine the way forward,” GECOM Commissioner, Sase Gunraj told reporters following the suspension.

This comes less than a day after Chief Justice (ag) Roxane George ruled that the Declaration of Results by the Returning Officer for the District, Clairmont Mingo, was null and void. The ruling came as a result of legal action brought by the People’s Progressive Party/Civic (PPP/C).

Mingo, the Court ruled, did not adhere to the process of tabulation as outlined in the Representation of the People’s Act.

CJ George ordered that the process recommence no later than 11:00h this morning (Thursday) but that order was not complied with since Mingo attempted to utilise the contentious spreadsheet.

Objections were raised which saw the intervention of the Chairperson who later suspended the process.

As the High Court prepares to hear the People’s Progressive Party’s (PPP) contempt case against the Region Four Returning Officer, Calirmont Mingo, A Partnership for National Unity+Alliance For Change (APNU+AFC) said this latest legal move should not be approved because it is a ruse to cover up bogus statements of poll (SOPs).

“The PPP took the matter to court and the Chief Justice has made her ruling and now the PPP wants to set aside the CJ’s (Chief Justice) ruling and demanding another set of action to suit their fabrication of their SoPs. This demand should not be countenanced,” the coalition said. 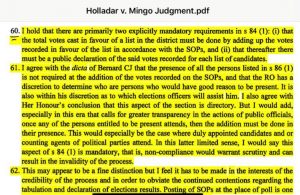 The PPP experts say this is the basis for filing contempt proceedings against the Region Four Returning Officer, Clairmont Mingo.

PPP General Secretary Bharrat Jagdeo has challenged APNU+AFC to release its statements in similar manner to his party if it has nothing to hide.

After the March 2, 2020 general and regional elections, results for the nine other electoral districts were tabulated and declared with comparatively far less hassle and controversy.

But, tabulation the results for Region Four has been mired in confusion with the PPP claiming victory that the SOPs instead of a spreadsheet should be used.

“In the interest of transparency and taking into consideration, the Returning Officer and the Deputy Returning Officer for District Four is to decide whether the process of determining whether the total votes cast in favour of each list in the District by adding up the votes in favour of the list and in accordance with the Statements of Poll should be restarted or continued,” one of the consequential orders on Tuesday states. When the process began Thursday morning, stakeholders objected to Mingo’s use of a spreadsheet on the grounds that that was not provided for in the orders of the court.

With the High Court on Friday morning scheduled to hear contempt of court proceedings brought by the People’s Progressive Party (PPP) against Mingo, APNU+AFC Thursday night urged him to declare the results without delay.

“The coalition has scrupulously adhered to the provisions of the Representation of the People Act and has remained in quiet obedience to the dictates of the Commission and Court in this matter, which has gone on for ten days. Our obedience should not, however, be mistaken for softness or a lack of resolve to ensure that the will of the people prevails and is not outshouted by any special interest group in our country.

It is, therefore, extremely important for the Returning Officer to proceed unimpeded to a final tabulation so that GECOM will be put in a position to make its final declaration in accordance with the relevant provisions of the Act,” the APNU+AFC said.

The coalition noted that the Chief Justice stated that it was “the decision of the Returning Officer to decide the best method of tabulating the Statements of Polls” and that “everybody else who thinks they can have an input, and a say, it is not their statutory duty.” “The continuing attempt to disrupt by the PPP/C is, therefore, a blatant attempt to interfere, contrary to the ruling and expressed order of the court,” the coalition states.

The APNU+AFC called on GECOM to ensure the resumption of the tabulation and that it proceeds without hindrance, as no one Guyanese is above the law and all subject to the constitution and laws of Guyana.

The coalition appeared to suggest that if any of the contesting political parties is dissatisfied with the results, that party could ask for a recount or ultimately file an elections petition. “Any aggrieved party can then exercise its rights under the law to challenge by the result by filing the relevant applications,” the APNU+AFC said.

There are piles of undecided election petitions over the years that languish in the court systems even after fresh elections are held and new petitions are filed.

The PPP on Thursday released figures showing that it won the general elections.

The five Caribbean Community (CARICOM) Prime Ministers, under the leadership of CARICOM Chairman, Barbados’ Prime Minister Mia Mottley, on Thursday called for every vote to count. Mindful of the wide-ranging powers of a Returning Officer, Mottley called on Mingo to abide by the Chief Justice’s ruling to ensure transparency.

The Guyana Elections Commission plans to make yet another attempt on Friday morning to complete the tabulation of votes cast in keeping with the Chief Justice’s ruling. A GECOM spokeswoman says the Returning Officer will decide whether to use the SOPs or the spreadsheet.

GECOM’S Deputy Returning Officer, Roxanne Myers has testified that spreadsheets have been used in tabulating and declaring results in several other regions.

The CARICOM Chair led a delegation comprising of regional leaders on a two-day visit to Guyana. They arrived here on Wednesday and has since met with incumbent President David Granger and Opposition Leader Bharrat Jagdeo as well as small political parties and other election stakeholders.

At a press conference this morning (Thursday, March 12, 2020), Prime Minister Mottley stressed that Chief Justice (ag) Roxane George was clear in her ruling that she expects the Returning Officer (RO) to either start anew or complete the process with respect to the adherence of Statements of Poll (SoPs).

PM Mottley further pointed out that even though the statute puts the power in the hands of the Returning Officer, that Returning Officer will understand that he “holds in his hands, the future and stability of Guyana as we go forward.”