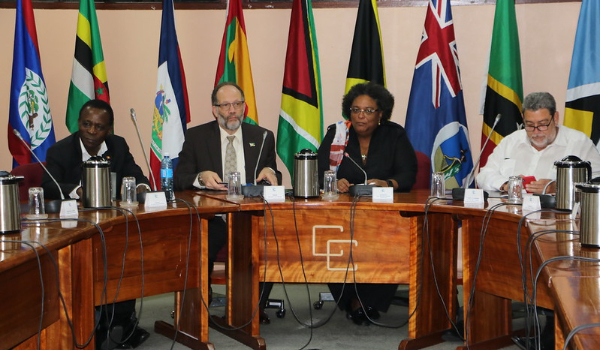 The CARICOM Chair led a delegation comprising of regional leaders on a two-day visit to Guyana. They arrived here on Wednesday and has since met with incumbent President David Granger and Opposition Leader Bharrat Jagdeo as well as small political parties and other election stakeholders.

At a press conference this morning (Thursday, March 12, 2020), Prime Minister Mottley stressed that Chief Justice (ag) Roxane George was clear in her ruling that she expects the Returning Officer (RO) to either start anew or complete the process with respect to the adherence of Statements of Poll (SoPs).

PM Mottley further pointed out that even though the statute puts the power in the hands of the Returning Officer, that Returning Officer will understand that he “holds in his hands, the future and stability of Guyana as we go forward.”

Chairperson of the Guyana Elections Commission Justice Claudette Singh moments ago suspended the tabulation process of the votes for District Four (Demerara-Mahaica) to seek clarity on the Chief Justice Roxane George’s ruling.

Representatives of political parties were at odds with the Returning Officer Clairmont Mingo this morning when he attempted to use a spreadsheet to do the count for Region Four.

“To arrive at these spreadsheets, I took each Statements of Poll, inputted into our computer, tabulated it and come up with these sheets for each polling station,” Mingo added.

A party representative then asked, “How can we verify what you’ve inputted in those SOPs is the correct figures?”

Mingo replied by saying that “If it does not follow, then there is a course of action which is specified in the law you may follow.”

Observers and party representatives continued to protest the use of the spreadsheet.

Thereafter, the GECOM Chairperson arrived and addressed the gathering where she subsequently suspended the process to seek clarity.

The Chief Justice yesterday ruled that RO did not compile the tabulation of the majority of the SOPs in a transparent manner to ensure accountability in front of the statutorily authorised stakeholders.

In her ruling, she urged that the new process be done in a transparent manner so as to restore confidence in the electoral process.

The People’s Progressive Party/Civic (PPP/C) is moving to file contempt of court proceedings against the Returning Officer (RO) of Region Four, Clairmont Mingo, for failing to adhere to the orders handed down by Chief Justice (ag) Roxane George on Wednesday.

A notice of ‘Intended Contempt of Court Proceedings’ was sent to the RO on behalf of private citizen, Reeaz Holladar, who had secured injunctions last week to block the declaration of unverified results by Mingo and the declaration of overall elections results from Monday’s polling day.

According to Attorney-at-Law, Anil Nandlall, in the legal notice, when the RO recommenced the verification process just after 11:00h this morning, he refused to ascertain and add up the votes recorded in favour of the list of candidate in accordance with the Statements of Poll (SoPs) and instead, choose to use a pre-prepared spreadsheet as the basis for the verification process.

Moreover, it was noted that none of the duly appointed candidates for electoral district number 4 were permitted to be present during the said exercise.

These, according to Nandlall, constitute flagrant violations of the Chief Justice’s orders.