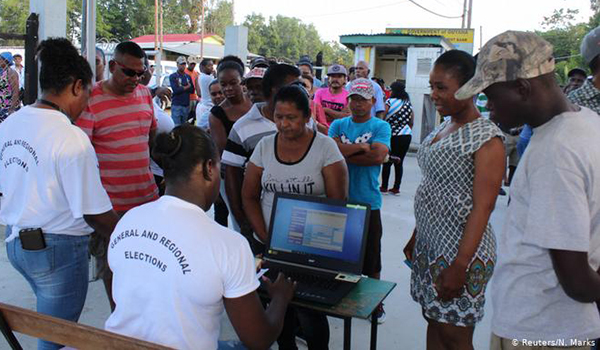 Delivering the judgment of the Full Court, acting Chief Justice Roxane George-Wiltshire SC, who along with Justice Nareshwar Harnanan had stayed a ruling made by Justice Holder giving himself jurisdiction to hear Moore’s matter for judicial review, said that that matter ought to have been brought by way of an elections petition.

Jagdeo had challenged Justice Holder’s decision to hear Moore’s case, arguing that the judge had no jurisdiction to enter into an inquiry into GECOM’s decisions and contending that it could only have been brought by an elections petition.

The People’s Progressive Party (PPP) on Tuesday appeared poised for a renewed push for the Guyana Elections Commission (GECOM) to recount all the votes cast in general and regional elections on March 2, 2020, with the High Court ruling that it cannot legally hear two cases.

Attorney-at-Law, Anil Nandlall said now that the Full Court of the High Court ruled against Justice Franklin Holder’s decision that he could not have heard APNU+AFC candidate, Ulita Moore’s application for a judicial review of GECOM’s decision to conduct a national recount, it is now time for the commission to move ahead with that exercise.

“Now that the way has been cleared, we expect that GECOM would now take up the mantle and the commitment that the Chairperson of GECOM gave publicly, gave to several courts including Justice Holder’s court in her written submissions, that a recount already decided upon by GECOM will now be carried out and that the political parties will be allowed to participate and observe fairly that recount,” Nandlall told reporters.

He said the matter was now in the hands of GECOM. He noted that GECOM Chairperson, Retired Justice Claudette Singh has given commitments in court documents and out of court for a recount.

Earlier Tuesday, Nandlall said he did not consider the GECOM Chairperson’s options contained in her affidavit that states that “hence two options are available to GECOM: to either accept the Chief Elections Officer’s report pursuant to Section 96 (2) of the Representation of the People Act, Chapter 1:03 or order a recount of the votes cast.” The GECOM Chairperson, through her Attorney-at-Law, Kim Kyte, said in court documents that the “commission should be permitted
to execute its constitutional role and functions with or without the Caricom Agreement.”

The Full Court, presided by Chief Justice Roxane George-Wiltshire and Justice Naresh Harnanan also unanimously refused an application for leave to file an appeal to the Guyana Court of Appeal because there was no prospect of success, but Moore’s lawyer, Attorney-at-Law, Mayo Robertson said he would go ahead and do so. “Obviously, we disagree with the decision of the court but we have a system that has several tiers. We are at the second tier now and we are going to go to the second tier,” he said.

Also, Justice Holder Tuesday afternoon ruled that the High Court had no jurisdiction to hear a request by People’s Progressive Party (PPP) representative of the list of candidates, Bharrat Jagdeo for the second declared Region Four results by Returning Officer, Clairmont Mingo to be discarded.

Asked what Tuesday afternoon’s decision by Justice Holder not to discard the Region Four declared results, Boston said, “as it stands right now the coalition has won the elections”. Further grilled on how did he reconcile Justice Holder’s decision with the Full Court’s decision that the High Court could not hear a judicial review of GECOM’s decision to recount, Boston said “GECOM would have to decide what they will do whether they will consider the report sent to them by Mingo and then declare the President and who is the winner.”

But Nandlall recalled that GECOM would not have acted on Returning Officer Clairmont Mingo’s declaration on March 13 and so had “committed themselves to a recount.” “I am not worried about Lowenfield’s compilation based on Mingo’s declaration because the Commission has spoken to that already,” he said.

Nandlall, who is also an executive member of the PPP, said an appeal by Moore would not stop the recount.