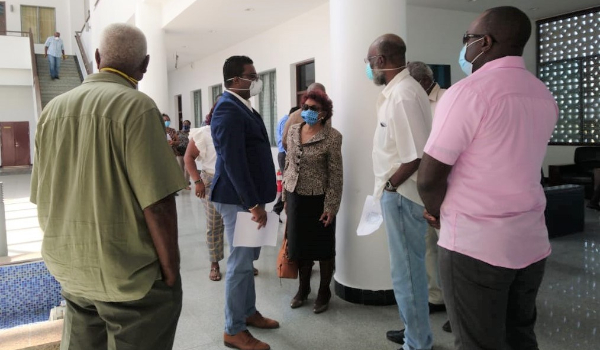 No start date yet for National Recount

The Guyana Elections Commission (GECOM) has still not identified a date for the national recount to begin following another meeting of Commissioners today (Wednesday).

Providing a brief update to the media today, APNU/AFC-nominated Commissioner, Vincent Alexander, said that plans are progressing smoothly for the recount to begin, but the commencement of the process is dependent on the arrival of the CARICOM-high-level observer team. The team is expected to be in Guyana on Thursday.

Alexander said that once the team arrives, the exercise could begin shortly after.

Meanwhile, the issue of having the national recount live-streamed is still not completely off the table as Chairperson of GECOM Justice Claudette Singh, is expected to make a final determination after another suggestion was made to her for consideration during today’s Commission meeting.

People’s Progressive Party-nominated Commissioner, Sase Gunraj, who indicated that while the Chairperson voted against a motion to have the recount process live-streamed in its entirety last week, there were certain aspects that she was still in support of.

“The end position today (Wednesday) in relation to live streaming is that the Chairman, having her own concerns and having her own preferences in relation to live streaming of the count or parts thereof …a suggestion which was made and accepted by her; that she will consider the technical aspects of it and determine which aspects she will want to move on with, this decision currently rests with her,” Gunraj said.

Almost every stakeholder involved in the elections had signaled their support for live-streaming of the national recount on the basis that it would have boosted public confidence in the process and made it easier for the results to be accepted by all parties.

Justice Singh herself, in her written submissions to the court, had highlighted the importance of GECOM and the electoral process enjoying public confidence so that the election results would be accepted by all.

Gunraj also disclosed that a decision was made to extend the hours of the recount; which will now be from 08:00h to 19:00h. This now brings the daily total hours to eleven.

When asked about the duration of the recount; he explained that three main factors will ultimately determine how long the process will take – the number of hours worked, the time taken on a ballot box and the number of work stations being used to carry out the exercise.

The Guyana Elections Commission (GECOM) has received approval from the National COVID-19 Task Force (NCTF) to extend its daily counting hours to 19:00hrs. As such, the process will run from 08:00hrs to 19:00hrs daily.

This was disclosed by GECOM Commissioner Sase Gunraj following a meeting of the Commission on Wednesday.

The Commission has not yet determined the start date for the recount but the extension of the daily hours is expected to have an impact on the 25-day schedule for the conclusion of the process.

The GECOM Commissioner disclosed that the Secretariat has begun preparations at the recount venue –the Arthur Chung Conference Centre –on Wednesday. A simulation exercise is expected to be conducted on Thursday.

“The Secretariat is well on its way to being prepared…” GECOM Commissioner Vincent Alexander said.

One of the recent concerns in relation to the recount is a recommendation by health officials to have 33,000 masks for the process.

This matter, however, did not come up for discussion on Wednesday.

“We have not discussed the matter, that matter was not brought to our attention as a matter of concern…the secretariat has not brought that to as a concern,” Alexander said.

The team recommended that the masks be changed every 30 to 60 minutes by the 132 persons who are expected to be present at the 10 counting stations.

The GECOM Commissioner expressed confidence that GECOM’s Secretariat is prepared to move ahead with the process.

According to Alexander, one local electoral observer and foreign observer will be allowed at each station.

As such, the issue of live streaming the recount was again brought up with the request to have the count streamed to those observers who will not be at the venue.

However, this was not approved as there is no guarantee that the stream will only be shared to those who it is intended for.

“The proposition that came to us is not one for public screening but to those observers who will not be there,” he noted.