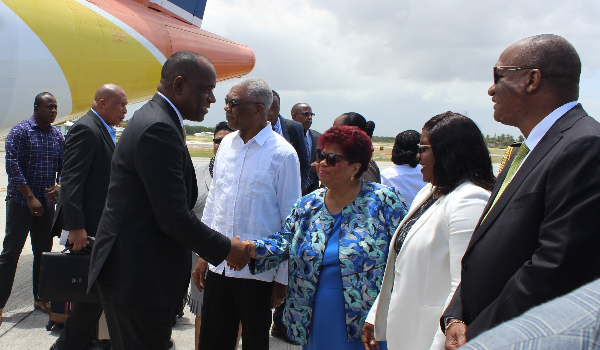 The Private Sector Commission and a host of private sector bodies have written to Mia Mottley, Prime Minister of Barbados and chair of the Caribbean Community (CARICOM) to continue to engage with Guyana on the elections process.

Please see below the full letter:

We, the undersigned, representing a wide cross section of civil society and private sector organizations in Guyana, are committed to maintaining democracy and the rule of law, including free and fair elections and the entitlement of all citizens to human and political rights free of discrimination of any kind.

We are strong supporters of the principles and values established in the United Nations Charter and declarations of the UN, including the declaration adopted by the UN General Assembly on 24th September 2012 which reaffirmed that: “human rights, the rule of law and democracy are interlinked and mutually reinforcing and that they belong to the universal and indivisible core values and principles of the United Nations”.

Further, as a nation, the people of Guyana have pledged “to forge a system of governance that promotes concerted effort and broad-based participation in national decision-making in order to develop a viable economy and a harmonious community based on democratic values, social justice, fundamental human rights, and the rule of law”. That pledge is enshrined in our Nation’s constitution and it reflects our desire for democracy and the rule of law, including free, fair and credible general elections that allows for a peaceful transition of government.

We are now deeply concerned that our democracy is being undermined, the rule of law ignored, and our elections process compromised by wrongful behaviour. We are particularly grateful to you, Prime Minister, and to your colleague Heads of Government of the Caribbean Community (CARICOM), for your valiant efforts to save our democracy and to ensure peace and stability in our country.

You and other CARICOM Heads of Government are aware that the international, hemispheric, regional and local observers of the Guyana elections of March 2nd, 2020 have all concluded that the counting of the ballots cast in the election by the Guyana Electoral Commission (GECOM) was not credible.

We were elated and hopeful when you led a team, comprising four other CARICOM Prime Ministers, that brokered an agreement between President David Granger, the leader of APNU-AFC, the leader of the Opposition Bharat Jagdeo, resulting in an Aide Memoire, signed by both leaders on 16 March 2020, and the Terms of Reference prepared by the Guyana Elections Commission (GECOM) to permit a High Level Team from CARICOM to supervise the recounting of the ballots, not only in Region 4, but in all 10 electoral districts.

Equally, we were sorely disappointed and dejected when a court order, sought by an elections candidate of APNU-AFC, issued on 17 March 2020, granted an injunction restraining the GECOM from recounting any ballots of the General and Regional Elections of 2 March 2020, and set aside “any agreement between the President of Guyana and the Leader of the Opposition and or any agreement between the Guyana Elections Commission and the Caribbean Community”. This matter continues before the Court as, 28 days later, our nation still awaits a result of the March 2nd general elections.

The consequent departure of the CARICOM high-level team on 18th March 2020 cast a pall of gloom and despair over Guyana whereas the team’s arrival had lit up our hopes and expectations. We took note of your public observation when the team was forced to depart that: “It is clear that there are forces that do not want to see the votes recounted for whatever reason. Any Government which is sworn in without a credible and fully transparent vote count process would lack legitimacy”.

Amid all this, Guyana, like every other country in the world, is confronting the unprecedented challenge of the corona virus which without a credible government in place, the country cannot effectively address.

In all these circumstances, we urge you, Prime Minister as Chair of CARICOM, to remain engaged with the situation in Guyana, and to continue to accompany us in ensuring that President Granger, GECOM and all other parties in Guyana, uphold genuine democracy and fully credible and transparent counting of the votes cast in the elections.

We fear that Guyana is on the brink of a political disaster with very grave consequences including social upheaval. We plead for continued efforts by CARICOM to avert a humanitarian crisis.

We are copying this letter to the CARICOM Secretary-General, His Excellency Mr. Irwin LaRocque, with the request that he distributes it to all CARICOM Heads of Government.

Bartica Chamber of Commerce and Industry

Rupununi Chamber of Commerce and Industry

Institute of Private Enterprise and Development

The Tourism and Hospitality Association of Guyana

GECOM yet to decide on way forward for recount

The Guyana Elections Commission (GECOM) is yet to decide on the way forward with a national recount.

After meeting for hours Thursday morning, the Commission was unable to make a decision and will resume its discussions at 15:00 hrs.

Commissioner Robeson Benn has put a motion on the table for a vote; that motion proposes that GECOM moves ahead with the recount, but no vote was yet taken.

Commissioner Vincent Alexander would only say that the discussion Thursday afternoon is to resolve the impasse. He would not be dragged into commenting whether he would support the recount.

GECOM is split evenly along party lines. There are three Commissioners representing the Coalition APNU+AFC and three representing the People’s Progressive Party. If there is a split decision, the Chair, Justice Claudette Singh, would be forced to make the deciding vote.

“As we speak, I believe that everyone recognises that a recount has to or ought to be conducted,” said Sase Gunraj, one of the Commissioners.

He said that some of the discussions surrounded the legality of doing the recount when there is an appeal of the Full Court decision which threw out the injunctions blocking the recount under the supervision of a CARICOM Team.

The Commonwealth Ministerial Action Group (CMAG) set up by the Commonwealth to deal with persistent and serious violators of its shared principles today called on GECOM “to immediately fulfil its constitutional mandate and ensure the sovereign right of the people of Guyana to duly elect their Government is respected through a transparent and credible counting and tabulation process”.

CMAG explicitly warned that “any Government which is sworn in without a credible and fully transparent vote count and tabulation process would lack legitimacy” and that Guyana will be kept on the agenda.

Analysts have said that Guyana can face expulsion from the Commonwealth if it fails to adhere to the Harare Declaration principles. Today’s statement piles more pressure on GECOM and the current administration to abide by free and fair elections principles.

The section of the statement on Guyana follows:

The Group commended the Good Offices efforts of the Commonwealth Secretary-General in Guyana, including the deployment of two Senior Electoral Advisers to support the Guyana Elections Commission towards the holding of credible, transparent and inclusive General and Regional Elections on 2 March 2020. In this connection, Ministers agreed that the valuable work of the two Senior Electoral Advisers deserved special commendation.

Ministers recalled that in 2018 Commonwealth Heads of Government recognised the valuable role of Commonwealth Elections Observation in supporting member countries to improve democratic processes and institutions. In this connection, Ministers noted the 18 March 2020 and other statements of the Commonwealth Observer Group, and the statements of other international and domestic observer groups.

Further, Ministers took note of the 17 March statement of the Caribbean Community (CARICOM) Chairperson, Prime Minister of Barbados, Hon. Mia Mottley QC; statements of respective Commonwealth and other Governments; as well as statements from other international organisations.

Ministers expressed grave concern that the credible and transparent counting and tabulation of every vote in Region 4 has been persistently frustrated, with a declaration by the Returning Officer having been ruled to be unlawful by the Acting Chief Justice.

Ministers noted and commended CARICOM’s efforts, at the invitation of President Granger and the agreement of the Leader of the Opposition, to support the transparent and credible counting of ballots under the authority of the Guyana Elections Commission. Ministers further noted with deep regret that the CARICOM High-Level Initiative in the interest of peace and the preservation of democratic values was halted. Ministers encouraged CARICOM to remain seized of the situation in Guyana and committed Commonwealth support to these endeavours.

Ministers recalled that the constitution of Guyana clearly states that sovereignty belongs to the people of Guyana. In this regard, Ministers noted and welcomed the public undertaking of the Chairperson of the Guyana Elections Commission, Justice Claudette Singh (Ret’d), that the votes would be recounted. Ministers called upon the Guyana Elections Commission to immediately fulfil its constitutional mandate and ensure the sovereign right of the people of Guyana to duly elect their Government is respected through a transparent and credible counting and tabulation process.

Ministers noted that Guyana’s judiciary continues to be seized with protracted litigation on issues of national importance. From the passing of the 21 December 2018 no confidence motion which triggered the constitutional requirement for a General Election; to the conduct of the Region 4 Returning Officer in the 2 March election; and the issue of a recount in Region 4. In this regard, Ministers reaffirmed the Commonwealth principle that an independent, effective and competent legal system is integral to upholding the rule of law, engendering public confidence and dispensing justice.

Ministers strongly iterated that any Government which is sworn in without a credible and fully transparent vote count and tabulation process would lack legitimacy.

Ministers affirmed the Commonwealth’s readiness, along with its partners, to provide assistance to ensuring a credible and transparent conclusion to the electoral process in accordance with the will of the people as expressed on 2 March.

Ministers also encouraged the Secretary-General to remain engaged with Guyana through her Good Offices and to keep CMAG informed of developments in the country.

Ministers agreed to keep Guyana on the formal agenda, and, where necessary, to convene an extraordinary meeting to discuss the situation and explore appropriate options.