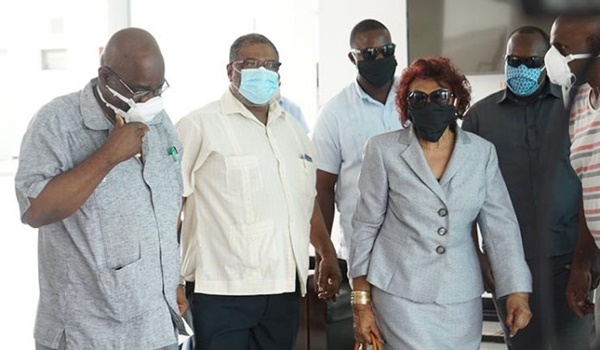 CHAIRMAN of the Guyana Elections Commission (GECOM), Justice (Ret’s) Claudette Singh said, in light of the global Coronavirus (COVID-19) pandemic, the Elections Commission will take all necessary precautions to safeguard the wellbeing of the Caribbean Community (CARICOM) high-level team that is expected to oversee the national recount, as well as all other individuals who would be integrally involved in the process.

To date, the virus, which is transmitted from person to person, has claimed the lives of over 150,000 persons globally, with over two million cases recorded. Cognisant of the deadly nature of COVID-19, Justice Singh committed to leaving no stone unturned in protecting the health and wellbeing of those of whom will be involved in the national recount of all the votes cast at the March 2020 General and Regional Elections.
On Monday, the GECOM Chair, the GECOM Commissioners – Vincent Alexander, Sase Gunraj, Robeson Benn, Charles Corbin, and Desmond Trotman; the Chief Elections Officer (CEO), Keith Lowenfield; and the Deputy Chief Elections Officer (DCEO), Roxanne Myers, revisited the Arthur Chung Conference Centre (ACCC) – the site for the national recount. However, this time, they were accompanied by experts from Public Health Emergency Operations Centre (PHEOC).

The visit was in keeping with recommendations made by the National COVID-19 Task Force (NCTF), and according to Justice Singh, it was necessary to facilitate discussions between the commission and the health experts on precautionary measures that would be instituted to eliminate the risk of anyone contracting the virus while on site.

“We need to ensure and guarantee the safety of the CARICOM team,” Justice Singh told reporters when approached at the conference centre. She said while the CARICOM high-level team has committed to return to Guyana, through the CARICOM Secretary-General, they have expressed concern about their safety in light of the global pandemic.

“The people are virtually afraid of contracting the virus. So that is why we are leaving no stone unturned to ensure their safety,” the GECOM Chair said.

“As soon as that is finish, we have to communicate what we have done to ensure the safety [of the team] to the [CARICOM] Secretary-General,” Justice Singh noted.

Justice Singh said it was out of concern of the safety and wellbeing of those who will be involved in the national recount, that she took a decision that there will be no more than 10 workstations within the conference centre.

“No more than 10 stations; that is what I said because I had to take into consideration the safety of those people. I could not guarantee their safety in 20 stations, outside of the building,” the GECOM Chair told reporters.

But though the GECOM Chair’s decision is final and falls well within the guidelines of National COVID-19 Task Force’s precautionary guidelines, Opposition-nominated Commissioner, Sase Gunraj, on Monday, remained resolute in his position that the conference centre can comfortably accommodate 20 workstations.

“I still see the possibility of a greater number of stations,” Commissioner Gunraj told reporters while standing outside of the conference centre. In his proposal, Commissioner Gunraj had said with 20 workstations operating at a rate of one hour per ballot box, the recount could have been executed within a period of 10 days.

But Justice Singh made it clear on Monday that she would not be able to guarantee the safety of the CARICOM high-level team nor any of the other persons, who would be present at the ACCC, were there to be 20 workstations. Her decision to limit the number of workstations to 10 came after the CARICOM Secretary-General expressed concern about the large number of persons that would be required to execute the national recount, should the commission agree to the use of 20 workstations.

Government nominated Commissioner, Vincent Alexander, who had long expressed concern over Gunraj’s proposal, said 20 workstations would have resulted in more than 300 persons assembled in the Conference Centre at a given time and such would have result in a major health crisis.

“The contention, however, continues to be that in any of those circumstances, the large number of persons in the compound, to me, would defeat the whole question of how we are trying to deal with COVID-19. That apart, I maintain the position that 20 stations in the compound lends to the mob situation that we were disposed to at Ashmins, and we cannot repeat that; we have to learn from our experience. Therefore, what we have to use is the building, where we can have greater control in terms of who attends what,” Alexander had reasoned.

Justice Singh, like Alexander, has underscored the importance of physical distancing throughout the exercise. The Guyana Chronicle understands that there will be more than 14 persons in one workstation, and each person would be required to adhere to the 3ft to 6ft distancing requirement.

On the instruction of the CARICOM Chairman, Barbados’ Prime Minister, Mia Mottley, a high-level CARICOM team had arrived in Guyana on March 15 to supervise a planned national recounting of the ballots cast in the March 2 Elections, which had stemmed from an agreement between President David Granger and Opposition Leader, Bharrat Jagdeo.

However, on March 17, 2020, the high-level team withdrew from the process, after it was beset by several stumbling blocks. A private citizen, Ulita Moore, secured four injunctions from the High Court to block the recount, on the grounds that it was unconstitutional. Added to that, though President Granger and the opposition leader had signed an Aide Memoire agreeing to the recount, CARICOM had requested a legal cover, in the form of a gazzetted order. However, Guyana’s Chief Parliamentary Counsel, Charles Fung-a-Fat, advised against it. According to him, to do so would be to supersede electoral laws, and infringe on the rights of electors.

On April 3, however, GECOM took a decision to proceed with a national recount after the Full Court had discharged the injunctions and dismissed the fixed date application for judicial review filed by Moore on the basis that the challenge ought to have come by way of an elections petition.

Justice Singh said the decision was taken against the backdrop of Article 162 (1) (b) of the Constitution of Guyana, which mandates the commission to “take such action as appear to it necessary or expedient to ensure impartiality, fairness and compliance with the provisions of the Constitution.” But while the Court of Appeal ruled out the possibility of CARICOM supervising the recount, the elections commission thought it important to have CARICOM integrally involved to validate the process.