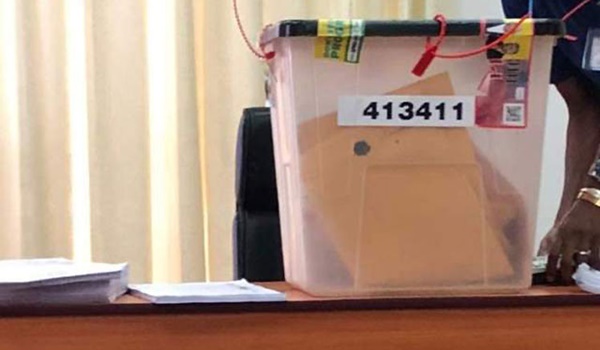 “He who alleges must prove” – GECOM Chair

The recount of ballots cast during the March 2, General and Regional Elections has been punctuated daily with allegations of votes being cast in the name of dead persons, or persons said to have migrated.

There have been numerous reported instances of ballots being unstamped or unclear, or even a party questioning legitimacy of its own votes; but a decision by the Guyana Elections Commission (GECOM) in regard to how to treat with those allegations has in fact not been made, though the matter has been discussed at that level.

GECOM Chairperson, retired Justice Claudette Singh, in a public statement on Thursday, reaffirmed emphatically: “While I continue to monitor the trends based on the allegations in the Observation Reports, I am of the view that ‘he who asserts must prove’.”

Essentially, this is calling on those party agents making objections at the counting stations to “prove” that their claims are in fact valid.

Addressing the treatment of allegations being recorded in Observation Reports that accompany the Statement of Recount (SOR) for each ballot box, the GECOM Chair stated ardently, “When there are considerable deliberations and decisions at the Commission in relation to claims of anomalies, the outcome would be officially communicated to the political parties and other stakeholders, particularly the media.”

The Chairperson’s position on the litany of daily allegations and varying public positions being adumbrated was made subsequent to a publication captioned “Justice Singh doesn’t think it’s GECOM’s role to probe claims of anomalies”, carried in another section of the media, and attributed to Peoples Progressive Party/Civic (PPP/C) GECOM Commissioner Sase Gunraj.

Justice Singh, in her public missive upbraiding Gunraj over his public utterances, indicated that the Commissioner had not been authorised to speak on her behalf on the matter.

Gunraj is on record, during the course of the recount, advocating a position that it is not within the remit of GECOM to investigate the allegations being made during the recount exercise, but rather those should be addressed separately.

He has since apologised over the published remarks, which intimated that the Chair’s position on the matter is that only the numbers garnered in a numerical count of the ballots cast was important at this stage.
The GECOM Commissioner, in clearing the air, conceded a discussion on the matter at the level of the Commission, but affirmed, “No decision was taken in this regard at the level of the Commission.”

Addressing the matter of dead and migrated voters, PPP/C Executive Member Anil Nandlall on Thursday pointed out to media operatives that the allegations appear to be levelled in the PPP/C’s stronghold constituencies, when contrasted with the controversial results in Region Four.

Speaking with reporters on the sidelines of the recount exercise, Nandlall indicated that the exercise in part dealt with ballot boxes from South Georgetown, where “remarkably, we didn’t hear any allegation of dead voters voting, and migrated persons.”

He has since posited, “Wherever the PPP’s support is, the allegation is that dead and migrated people voted…in those areas alone.”

According to Nandlall, the allegations emanating from only PPP strongholds inherently imply that agents from the two parties, along with the Polling Officers, conspired in favour of the PPP in order to have those occurrences.

Contrasted against the counting exercise for the ballot boxes recounted in South Georgetown however, Nandlall outlined that those agents in those polling stations conducted themselves excellently, and performed their functions with distinction.

He surmised, “The story just doesn’t make sense. As they go along, they continue to make it up.”
The public discourse over the observations comes in wake of a confession by APNU+AFC tabulation agent Ganesh Mahipaul that the party did not, in fact, have any evidence to support its claims that persons allegedly out of the country voted on Election Day.

Mahipaul told reporters on Tuesday that the objections were being made based on “hearsay” provided by his party agents who are conducting field work.

Additionally, the APNU+AFC agent, in claiming to have evidence to support the claim that a dead person had been reflected as voted, supplied the State Media with a death certificate which was reproduced in the Guyana Chronicle.

Mahipaul is still to provide evidence that a ballot was supplied to anyone for the identified name and serial number, and that the ballot had been cast in light of the Chairperson’s view, that “he who asserts must prove.”

The APNU+AFC tabulation agent had insinuated that it is for GECOM to now decide what it would do with the observation. He said, “The time for evidence will come,” and, “If GECOM says that they want this evidence, then we will have to get the evidence. If GECOM says that they will do an investigation, they will do an investigation.”