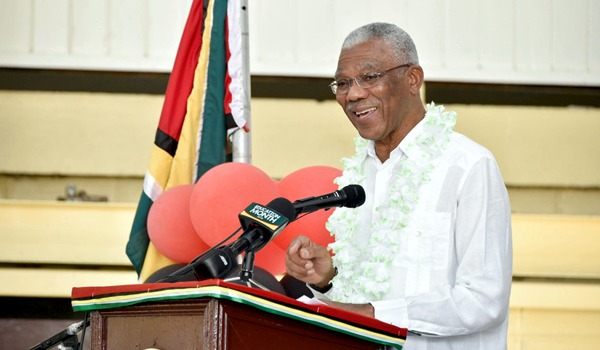 Members of the United States Congress have written to incumbent President David Granger urging him to ensure that the 2020 results to be declared from the recount process is internationally recognized.

“Your leadership role during the recount process is critical to Guyana’s continued respect for the rule of law. Your place in Guyana’s history will be secured by ensuring an internationally-recognized Declaration of Results consistent with the laws of Guyana,” the letter dated June 4, 2020, noted.

The Members commended President Granger’s commitment “to honor the results and your attempts to address the concerns of the Guyanese people.”

They also made a subtle case for the President to allow international observers to return and observe the remainder of the electoral process here.

“We remain hopeful that the recount will be conducted in a fair and transparent manner, instilling confidence in the results and Guyana’s democratic institutions – with the support of the credible international observers that can verify the integrity of the process and the final result.

“The coronavirus pandemic continues to pose challenges for all countries and we understand that you have taken many unprecedented steps to the slow the spread of the virus, including closing your airport. Even so, all countries implementing measures to mitigate the spread of the coronavirus have also acknowledged that some work is so essential that it must continue. The legitimacy of elections will ensure the people of Guyana and their friends around the world can trust and e proud of the final result in the ongoing recount,” the members noted in the letter.

President Granger has denied two requests by the Carter Center Observer Mission to return and observe the recount of votes cast on March 2, 2020.

The Carter Center has played a crucial part in Guyana’s elections since 1992.

the Guyana Elections Commission (GECOM) is heading to the finish line regarding the recounting of ballots cast in the March 2, polls, the Private sector Commission (PSC), has urged all political parties and citizens of Guyana to accept the results of the recount process and maintain peace in the society.

“As the nation nears the conclusion of the Recount of the votes cast in the March 2nd general elections, the Private Sector Commission (PSC) calls upon all the people of Guyana and each of the contesting parties to recognize and accept the result of the Recount, agreed to by both President David Granger and General Secretary of the PPP/C Bharrat Jagdeo, as the final decision and declaration of the Guyana Elections Commission,” the PSC said in a brief statement on Thursday.

“The Private Sector especially calls upon the people of our country, regardless of political preferences, to respect and uphold the rule of law and to keep the peace in their individual and collective well-being and in the interest of our beloved country,” the statement added.

As of Wednesday evening, there were 326 ballot boxes out of the total of 2,339, left to be counted.

Based on the recount results so far, the PPP/C is leading with 187,519 votes in the General Elections, while the incumbent A Partnership for National Unity/Alliance for Change (APNU+AFC) trails with just about 174,000 votes recounted in its favour.

The exercise will have to conclude by June 13, after which GECOM would have three days to declare a final result for the elections.

With last night’s updated recount numbers projecting a significant lead for the opposition, the APNU+AFC late last evening sent out a press release calling the recount results not credible.

According to this paper’s latest analysis of the numbers coming out of the recount exercise, 84% of ballot boxes have been counted so far, amounting to 369,770 votes for the General Elections. This number is 105,819 votes shy of the current total of votes from the original count, 475,589.

At present, GECOM holds a pair of declarations for each of the 10 regions. Those are being held “in abeyance”.

Commissioners and the Public Relations Officer, Yolanda Ward had said that the declaration coming out of the recount will automatically replace those which are held in abeyance. However, a declaration from the recount will not be produced until all regions have been counted, according to Commissioners and the order for the recount. Before a declaration is made, GECOM has to consider the numerical results alongside the observation statements, which include thousands of claims by APNU+AFC of electoral fraud.

With the People’s Progressive Party currently leading the APNU+AFC coalition by 13,050 votes via recount, this means that the coalition would have to secure 12.3 percent of that 105,819 to catch up to the PPP, with the opposition gaining no more votes. And if the coalition were to emerge as the winner, in keeping with the previous declaration, it would have to also secure the majority of the remaining 87.7 percent or 92,769 to secure the 7,501 lead it enjoyed over the PPP according to the previous declaration.

That lead that the coalition enjoyed in the declarations currently in abeyance came from the 58,826 vote ‘win’ of Region Four, handed to them by the region’s Returning Officer Clairmont Mingo in tabulations that this paper has revealed as being pervasively fraudulent.

In a statement published late last night discussing developments at the recount, the coalition put forward its clearest statement yet on how it would treat the final outcome of the recount: “Any results emanating from this process cannot be considered credible because of the high incidence of fraud.”

The party referred to a statement purported to have been made by the PPP/C’s Anil Nandlall, that “once a fraud has been committed, it nullifies or voids the entire process.” The party said that it expects the PPP/C not to shift the goal post and that it will stick to this position.

APNU+AFC representative Aubrey Norton had told media operatives on May 22 that “the process teems with irregularities. From the inception, I said it cannot be considered to be anomalies anymore.”

Norton had said that the many allegations the Coalition is making are enough to prove that “this is a clear case of electoral fraud and rigging.”

He also said “I would say the thing to do is not to run too far ahead of the process. Let the process [run] its course. Once it takes its course, under the order, GECOM has to do its assessment, and let us await the position of GECOM, and then we can take it from there.”

In its most recent statement, the coalition claimed “The APNU+AFC has been exposing evidence of electoral fraud perpetrated on this country by the PPP/C. We will continue to do so during this recount exercise. The recount process has revealed that the election of March 2, 2020 was riddled with fraudulent practices; the dead voted, people out of the jurisdiction voted, many unstamped ballots, missing certificates of employment, missing poll books, ballots cast over and above the number on the OLE and other fraudulent practices.”

Despite this claim, the coalition has not produced any verifiable evidence to prove that there is electoral fraud. The party has presented its unsubstantiated claims as ‘evidence’. In fact, many of the claims the Coalition made have been proven to be false.

The President had had a brief engagement with the press after he visited the recount venue, the Arthur Chung Conference Centre on May 17 last. Moving over to the National Aquatic Centre, the President was asked whether he will accept the results of the recount. In response, President Granger said, “Whatever declaration is made by the Chairman, [Justice Claudette Singh] of the Elections Commission would be regarded as legitimate by the Coalition Government.”

The questions had come at a time when members of the Coalition, Basil Williams and Roysdale Forde had declared the recount to be illegal, and had questioned the legitimacy of the results which would come from it.

Stating emphatically that it was he who had ultimate authority for speaking on behalf of the governing Coalition, Granger said “As President of Guyana and leader of the Government, it is my policy that any declaration coming from the Chairman of GECOM will be accepted by the Government of Guyana.”

The President had said that it would be “premature” for pronouncements to be made on whether the March 2 polls were credible and that the recount serves this purpose – “to determine the credibility of the ballots which were cast on the second of March.”

“I would say,” Granger noted, “that the elections were well managed and were orderly. Whether the results are credible is to be determined and that is the job of the Elections Commission.”

While he has committed to accepting “whatever declaration” comes out of GECOM, Granger has completely avoided abiding by or committing to the outcome of the recount.