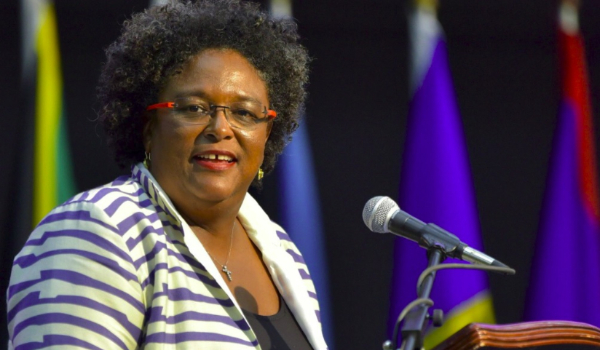 Prime Minister Mia Mottley tonight broke her silence on the Black Lives Matter movement – after it was re-energised with the killing of a middle-aged African-American man, George Floyd, by a white police officer who kneeled on his neck until he died.

Speaking amid criticism that she has been silent amid the civil rights protests which have erupted in the US and spread worldwide, she declared that she had no issues supporting principles, but that as chairman of CARICOM she needed to be mindful of the comments she made.

Mottley is set to leave the six-month rotating chair of the 15-member community of mostly majority-black nations next month.

She told the House in her first speech on the floor since March 20: “It is easy for people to talk blindly, I note it in this country, there are those who are saying for example, that I have said nothing on Black Lives Matter. There are those who are forgetting that at this time I speak not just as Prime Minister of Barbados but for another two to three weeks as chairman of CARICOM and they would do well to understand that I have never believed in jumping on bandwagons but I believe fundamentally in supporting principles.

“I am not going to take lashes for things because people chose not to get into fights or not to engage in arguments.

“I give this country the assurance that whether it is a march or not, this country is not going to support behaviour that in any way reflects unfair treatment, discriminatory treatment or unconscious bias.”

She stressed that the Barbados Labour Party had pushed the issue of reparations for Barbados and the region and was responsible for the Emancipation Day and Heroes’ Day bank holidays.

But turning her attention to last Saturday’s aborted Black Lives Matter protest, organized by the Caribbean Movement for Peace and Integration, Mottley acknowledged that she would have preferred if police had shown some discretion.

Yet she insisted that the police were not wrong for halting the protest after the organizers did not adhere to the conditions of the permit. Police stepped in to halt the protest because scores of Barbadians came out to join the demonstration which was only approved by the Attorney General on the stipulation that only ten people could be allowed for the outdoor event.

Commissioner of Police Tyrone Griffith who is responsible for approving permits to march under the Public Order Act referred the group’s application to the AG, after claiming that while he was not opposed to the demonstration, he was bound by the public health emergency restrictions.

The Prime Minister said: “What transpired on Saturday I am not happy with it, but when I investigated the Attorney General showed me a letter from an attorney-at-law asking for ten persons.

“Now I still do feel that discretion should have been exercised, I genuinely feel so, but let us not believe or make anyone believe that the police acted on their own when in truth and in fact, the letter says clearly that we would grant permission not only to walk, but that there would be no more than 10 persons in accordance with the emergency declaration for COVID-19 and that they would remain on the sidewalks.”

While not dismissing the stances being taken in the US and around the world, Mottley explained that battles were also being fought in Barbados.

She spoke to issues such as sexism and the need for black people to be proud of their skin, saying that there were “glass ceilings that were still not broken”.

“I believe that the solution to the problem comes not simply at the institutional level but in changing the hearts and minds of people in the small things as in the large things.”

Her comments came just one day after Dr Deryck Murray, the last head of Government’s disbanded Commission on Pan-African Affairs,.chided her for not speaking out against the Black Lives Matter movement and the injustices facing black people in the US.