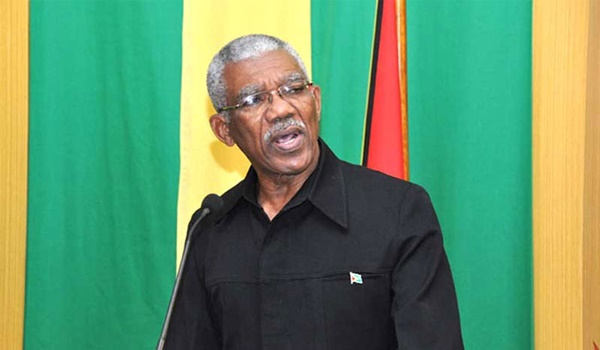 The Statement issued by the Government of Guyana, in response to the decision by the United States Department of State, is classic David Granger at work. Guyanese are well aware of the deceptive strategy of Granger, that is to say, remaining in the background and orchestrating his minions, including Ministers of his Government, candidates and leaders of his political party, his Commissioners at GECOM and even his party supporters, to front his unconstitutional, undemocratic, illegal and sinister political agenda, and when they are exposed, he appears in the public with a glib denial of any wrongdoing and repeats his sanctimonious pledge to obey the Constitution, to adhere to the rule of law, to comply with Court rulings and to promise non-interference with the operation at GECOM.

This is exactly the approach reflected in the Government’s Statement issued today. The Statement denies that the Coalition Government is undermining the electoral process and urges all “to await the logical conclusion of it, which is being managed by the Elections Commission, in accordance with the Constitution of Guyana”. Guyana, the Caribbean and indeed, the Western Hemisphere can bear testimony, first hand, to Granger and his Government’s multiple, transparent and vulgar attempts at undermining the electoral process and interfering with GECOM in the discharge of its mandate in conducting elections and declaring the legal results of those elections.

Only yesterday one of his minions filed legal proceedings seeking Orders from the High Court to compel GECOM to declare perverted results of the elections, so that Granger can steal the next Government. No doubt, Mr. Granger is the intellectual author and is in charge of the conspiracy to rig the March 2nd 2020 Election. Not once has he condemned the naked fraud attempted by Clairmont Mingo and Keith Lowenfield. In fact, he and his Ministers have all embraced them and they still do. Every one of his Ministers are on record, in Guyana and overseas, canvassing support for their blatant attempts to corrupt the electoral process and defending those who are directly carrying out this illicit design. These Ministers include Prime Minister Moses Nagamootoo, Joseph Harmon, Raphael Trotman, Cathy Hughes, Khemraj Ramjattan and others. They have all hurled vitriolic abuses at every person and organisation, locally, regionally and internationally, who dared to criticize their conduct.

These sanctions were long intimated. Granger and his Cabal mocked those who spoke of them. Now that the sanctions have finally come, he sanctimoniously pleads his and his Government’s innocence. Everyone acquainted with the facts would agree that the sanctions are justified, in the circumstances.

A PERSONAL EDITORIAL ON GUYANA BY PRIME MINISTER DR. RALPH GONSALVES OF ST. VINCENT AND THE GRENADINES AND CHAIR OF CARICOM
[Broadcast at 8:00 a.m. on Wednesday, July 15, 2020, on Radio 705, National Broadcasting Corporation, NBC]

On July 8, 2020, the Caribbean Court of Justice (CCJ) delivered its judgement on the long-running saga touching and concerning the election of the President and members of the National Assembly of Guyana — the General and Regional Elections — held as long ago on March 2, 2020.

The CCJ’s judgement was lucid in every material particular. And as Guyana’s highest, and final, appellate court, it is authoritative. Thus, any attempt, however ingeniously clothed, to litigate all over again this or that matter upon which there has been a final determination or upon which the CCJ has pronounced authoritatively, is tantamount to an abuse of the process of the court or is frivolous and vexatious.

Since the delivery of the judgment of the CCJ, the Chair of the Guyana Elections Commission (GECOM), Retired Justice Claudette Singh, has been seeking to bring finality to the elections through relevant decisions, declarations, and directives in accordance with the Laws of Guyana and the judgement of the CCJ. Her central focus has been to get the valid votes, as identified or defined by the CCJ, counted. At every turn, GECOM has been frustrated by a recalcitrant Chief Elections Officer.

In a normal democracy what should a straightforward matter of counting votes, has become the equivalent of a long-running soap opera, pregnant with real danger for the people of Guyana and the Caribbean Community. This charade ought to be brought to an end immediately and a just declaration made by GECOM in keeping with the clear mandate delivered by the voters of Guyana and in accord with the Laws of Guyana and the CCJ’s judgement.

The entire world realizes that a small group of persons, in and out of Guyana, are seeking to hijack, in plain sight, the elections, and thus the country. Competitive elections deliver, necessarily, winners and losers. When you lose, you take your loss like a grown man or woman, and you move on peaceably to the role which the voters, in their collective wisdom, have assigned you.

CARICOM, the Organisation of American States, the European Union the Carter Centre and other independent observers including those from CARICOM, the governments of Canada, the United Kingdom, and the USA have pronounced on this matter, essentially with one voice. Yet, the dangerous games continue to be placed by a minority of persons associated with the political entity which has plainly lost the election. They are literally playing with fire, commotion, disorder, and civil war.

The leaders of CARICOM, including St. Vincent and the Grenadines, cannot and must not appear to be indifferent to, and detached from, what is happening in Guyana. That magnificent country, Guyana, and its industrious people of the highest quality, are dear to us in CARICOM. We are in solidarity with the people of Guyana; we defend on an ongoing basis the territorial integrity of Guyana.

Today, CARICOM defends democracy in Guyana; we defend the voters of Guyana; we are on the side of the angels in the stand-off between those who reject the people’s verdict and those who insist, properly, on its observance, recognition, formal declaration, and implementation. Guyana, as the host to the headquarters of CARICOM, as a signatory to the Charter of Civil Society, the Revised Treaty of Chaguaramas, and other fundamental documents of relevance, has certain fundamental obligations to CARICOM. A rogue clique within Guyana cannot be allowed to disrespect or disregard, with impunity, the clear, unambiguous ruling of the CCJ. The time for decisive action is shortly upon us.

I am deeply disturbed at the credible reports that persons, purportedly allied to certain political forces in Guyana, have been threatening, defaming, and verbally abusing leading personalities in the CARICOM Secretariat, including the Secretary General, His Excellency Irwin La Rocque. This is wholly unacceptable! Accordingly, I publicly call upon His Excellency President David Granger, an honourable man, to denounce those who have been engaged in such threats, defamation, and verbal abuse. The voices of all decent men and women of democratic temper must join in the denunciation and condemnation of those whose nefarious agenda is antithetical to every thing that is good and honourable in our Caribbean civilization.

These self-same vile and vulgar persons, having failed in their attempts to curse and bully Prime Minister Mia Mottley and former Prime Minister of Barbados Owen Arthur, and me, have now turned their demonic attention to senior staff members of CARICOM and other reputable persons in Guyana and the Caribbean Community. We must continue, fearlessly, to do the right thing. The evil of the anti-democratic brigands must not be allowed any space to triumph.

I await, soonest, the declaration by the Chair of GECOM of the results of the elections. It is long over-due!

On March 2 the Co-Operative Republic of Guyana held national elections, but it has still not declared a winner. All international observers of the vote count agreed that the manner in which votes were tabulated departed from established procedures. They unanimously agreed that a result based on these procedures would not be credible. The Organization of American States and Caribbean Community concluded that the recount of votes, which concluded on June 7 and showed a victory for the opposition, reflected the will of the Guyanese people. Unfortunately, Guyana’s leaders have refused to accept this result.

Today, I am announcing visa restrictions on individuals who have been responsible for, or complicit in, undermining democracy in Guyana. Immediate family members of such persons may also be subject to these restrictions.

In my public statements since the election I have been very clear that the United States stands with the Guyanese people and that there would be consequences for individuals who seek to undermine democracy. The events following the March 2 elections indicate that there are forces that have repeatedly refused to accept the will of the people at the ballot box. Guyana’s non-democratic trajectory is dangerous for its citizens and for the hemisphere as a whole. I hope that Guyana’s leaders understand what is at stake if they continue down this path.

This action is not about interference. It is to send a clear message of the consequences of subverting democracy and the rule of law, which poses a danger to us and our hemispheric partners. We have long said that we have no preference for a winning party, as long as it is selected through a free and fair electoral process that is credible.

Gov’t regrets decision by US Department of State

Georgetown, Guyana (July 15, 2020): The Executive arm of Government regrets the decision taken by the United States Department of State.

The matter affecting the outcome of Guyana’s elections is still before courts, which is entirely the responsibility of the judiciary. No declaration has been made.

The Executive Branch has not participated in the undermining of the electoral process and urges all countries interested in Guyana’s development to await the logical conclusion of the process which is being managed by the Elections Commission, in accordance with the Constitution of Guyana.
The Executive arm has not interfered in the functioning of the Elections Commission

Ministry of the Presidency

The United Kingdom (UK) has begun processes to impose sanctions on top Government and elections officials for undermining Guyana’s democracy as pressure builds on President David Granger to concede defeat and allow the swearing-in of the PPP’s Dr Irfaan Ali.

The United Kingdom is one of Guyana’s main development partners; funding for key infrastructure projects remains on hold since September last year when the United Kingdom and others deemed the Government unconstitutional for missing an elections deadline after the passage of the Parliamentary No Confidence vote.

The UK funds on pause include those for the construction of the road between Linden and Mabura and the bridge at Kurupukari as part of efforts to build the long-awaited road from Linden to Lethem. A Kingston-Ogle seawall development project is also on hold.

The News Room was reliably informed that the sanctions by the United Kingdom will be similar to those imposed by the United States. U.S. Secretary of State Mike Pompeo announced visa sanctions on Wednesday.

The measures will take immediate effect once they are announced.

The UK has joined with other countries over the past four months in calling for the declaration of an elections results based on the national vote recount.

Following the recount which showed the Opposition People’s Progressive Party beating Granger’s APNU+AFC by 15,416 votes, the UK and other international governments have repeatedly called for the results of the election to be declared using the tabulations from the national vote recount.

The UK had also warned that consequences will be imposed if this is not done.

On Friday last, High Commissioner to Guyana Greg Quinn who is one of the longest-serving diplomats in Guyana, said everyone is waiting on GECOM to act.

“This has gone on an awfully, awfully long time and it really does need a resolution and it needs a resolution sooner rather than later,” he had stated.

The recount results have since been challenged in the High Court with the hearing before the Chief Justice Roxane George set for Friday at 14:00h.