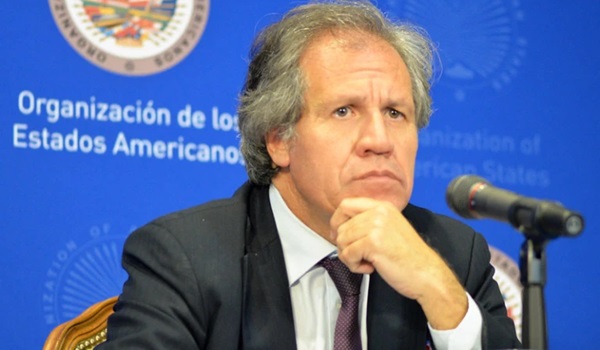 OAS: More of the Same in Almagro’s Second Term? – By Fulton Armstrong

OAS Secretary General Luis Almagro pledged “an active OAS with clear objectives on the regional political and democratic agenda” upon his inauguration to a second term on May 27, but unfulfilled priorities of his first term and the COVID‑19 crisis appear likely to overshadow any new initiatives. In his address, Almagro boasted that the OAS is “once again the Organization that is the main political forum of the Americas” and said it “must normalize democracy as the ideal political system for the Hemisphere, without discussion or exceptions.” He also spoke of the need to strengthen social inclusion and support “those most vulnerable to poverty who face injustice and discrimination.” He did not use the occasion to announce any concrete proposals.

Almagro’s deeply personal role in efforts to promote regime change in Venezuela dominated his first-term agenda but did not yield concrete results. His initiatives to drive change in Nicaragua have also failed to achieve stated goals. Even though many member nations are deeply critical of Venezuelan President Nicolás Maduro and Nicaraguan President Daniel Ortega, critics argue that Almagro’s actions, often without formal consultation with the Permanent Council, have been excessive and harmed the OAS’s credibility – particularly at a time that the United States has been pushing parallel efforts as part of a revival of its 19th-century Monroe Doctrine.

Many of Latin America’s problems are structural, have deep historic roots, and defy ready solutions that any Secretary General could drive. Almagro’s statements suggest continuation of the relatively narrow focus of his first term – heavy on driving political change in leftist countries that coincide with policy priorities of the United States and right-leaning governments in the hemisphere. Reducing poverty and increasing inclusion seem significantly lower priorities. Leftist and left-leaning governments will continue to grumble about the tilt toward interventionism under Almagro, notably his endorsement in principle of military action to remove Venezuelan President Nicolás Maduro, but fatigue and more compelling issues, such as the pandemic, probably will blunt challenges to his approach.