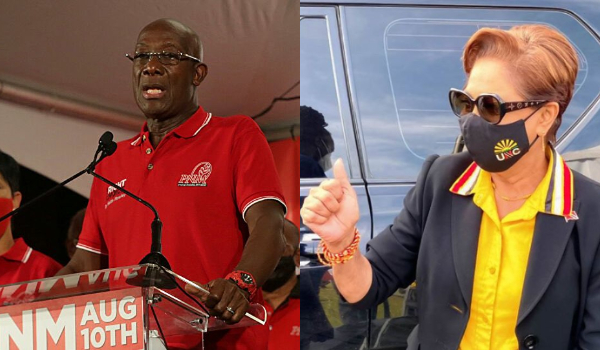 In a Facebook post on Thursday morning, Persad-Bissessar – who is yet to concede defeat in Monday’s general election – addressed Dr Rowley’s response to the UNC’s asking for recounts in five constituencies.

On CNC3’s Morning Brew on Wednesday, Rowley said the call for recounts in constituencies where the UNC lost by thousands of votes is part of a “deliberate strategy” to prevent the smooth transition of government after the election.

“This is a dangerous situation,” he said. “There is an ethnic flavour to this and the purpose is to incite a section of the population. There is a huge undercurrent of racism that has come out of this election. You can go on social media and see what’s happening there.”

Persad-Bissessar said the UNC’s “valid concerns should not be taken lightly.

“…especially since Prime Minister Rowley had blatantly refused to follow the long-established tradition of inviting foreign observers for the polls. The UNC is therefore fulfilling its constitutional duty and mandate to ensure that, as far as possible, we ensure that the democratic rights of citizens to free and fair elections were upheld.

“This is why we have requested, at this time, recounts in the five key marginal constituencies, where serious discrepancies were brought to our attention. At present, these are still ongoing, and we will advise you of any further developments when they’re officially completed.”

She said Rowley “questionably attacked” the UNC, and a democratic leader should not engage in such behaviour.

“PM Rowley is intent on continuing his dangerous trend of seeking to undermine our country’s democratic ideals and cherished independent legal institutions, which exist to provide equality, fairness and justice for citizens.

“I am therefore serving notice on him that his dictatorial habit of attempting to bully and intimidate citizens will not be tolerated by the UNC in any form. We will continue to utilise any and every constitutional means available to us to defend and protect our country’s cherished democratic freedoms, and the sacred rights of our citizens.”

The United National Congress (UNC) has been accused of making deliberate attempts to delegitimise the incoming government following the initial result of the 2020 General Election.

Prime Minister Dr Keith Rowley made the assertion during a televised interview on CNC3 on Wednesday morning.

Dr Rowley, who weighed in on the request by the United National Congress (UNC) for recounts in five seats, said the Opposition was trying to disrupt the democratic process to prevent a smooth flow of governance.

“There’s a very dangerous development taking place here. I accept that recounts are the call of the candidate or his agent.”

“What the UNC is doing is to disrupt the process. These are not accidental things. This is a deliberate strategy… so as to prevent a smooth flow of the country’s governance.”

He said the purpose of the “disruption” was to delegitimise PNM’s victory at the polls by “inciting” a level of tension among a particular segment of population.

“What the UNC is doing with this approach where you have a difference of two or three thousand votes and you are calling for a recount, it is to tell them, the population who support them, that they have been cheated – not for the first time.”

He said this was the same approach to the result to the 2015 election.

Dr Rowley noted that the new Cabinet would have been sworn in today, had there not been any recounts.

The UNC has requested recounts in the constituencies of La Horquetta/Talparo, San Fernando West, St Joseph, Toco/Sangre Grande and Tunapuna.

The Progressive Democratic Patriots (PDP) initially requested a recount in the Tobago East seat but has since conceded.

Recounts began on Tuesday afternoon even as tallies were still being compiled after midgnight polling day.

Initial results put the PNM in the lead with a 22-19 win, representing the loss of the Moruga/Tableland seat it captured at the 2015 polls.

The Elections and Boundaries Commission (EBC) cannot declare the results until all recounts are completed.

A huge undercurrent of racism is now the outcome of the 2020 election.

“What the UNC is doing is telling the East Indian population that they have won the election, but they were cheated by the PNM. You only have to go to social media to see the effect of that, a huge undercurrent of racism is now the outcome of this election.

“And that is the purpose of this (attempt to delay the process by recounts) because the UNC leadership is fuelling the East Indian population that this is not a legitimate victory of the PNM and that the election has been stolen,” he said.

Speaking on CNC3’s Morning Brew programme where he was interviewed by Natalee Ligoure, Rowley said: “There is a very dangerous development taking place. I accept that recounts are the call of the candidate or his agent…. But there are three things that the UNC is doing here. One is to disrupt the process so as to prevent a smooth flow of the country’s governance system.

“The swearing in (of the members of the Government) would have ta­ken place today had those recounts not been called. But this disruption has a purpose and that is to delegitimise the Government’s victory. And that has a purpose…to incite a section of the population. They are laying the foundation and because it has an ethnic favour to it, it is dangerous.

“What the UNC is doing by this approach, where you have a difference (in the margin of victory) of 2,000 to 3,000 votes and you calling for a recount, it is to tell their population who supports them, they have been cheated.

He said he saw a university lecturer describing the defeat and erroneously ascribing it to PNM organising the boundaries of seats so that the PNM would always win elections.

The Prime Minister said he was amazed he was being criticised in an Express editorial for declaring victory “before the Opposition came to their senses”.

The Prime Minister said he waited until the PNM had 21 seats before declaring victory for his party at Balisier House. He said he was getting results from the polling stations, results which are signed off by an electoral officer.

“I waited until I got 21 seats (the PNM won 22 seats) and the EBC signed off on the numbers; what do you want me to do? Say we have lost the election?” he said.

The Prime Minister reiterated he acted early enough in trying to get international observers for the election.

He said the Commonwealth indicated the financial requirements were not within their remit while Caricom could not get a sufficient number of persons interested in coming to another country and going into quarantine before observing elections.

Asked whether the presence of observers would have made a difference to the UNC’s response to the election result, the Prime Minister said there were observers in the country in 2015 and that did not prevent them from going to the court with the five election petitions.

The United National Congress’ (UNC) candidate for St Joseph, Ahloy Hunt, isn’t accepting his loss without a hard fight. After the party requested a recount after losing to the People’s National Movement’s Terrence Deyalsingh, the process, according to Hunt, hasn’t been a smooth one.

Recounts were supposed to end on Wednesday, but in an emergency press conference this morning, Hunt said there were certain discrepancies that he couldn’t leave hanging in the balance.

Hunt alleged that quite a few of the ballots from a single polling station had signatures that didn’t match up and as a result, he’s forced to question them all.

“Over 171 ballots had irregular initials by the Deputy Presiding Officer (DPO).

“That initial by the DPO and sometimes the PO, is the only piece of information that is going to certify whether the ballot is good or not,” he said.

Chief Election Officer, Fern Narcis-Scope, explained to LoopTT that discrepancies like this one are supposed to be addressed on the night of the election. Each political party usually has an agent present at the count who signs off on the veracity of the ballots, which was done successfully on Monday night.

As a result, this claim is seen as invalid.

Even if all these ballots are thrown out, the Election and Boundaries Commission’s (EBC) preliminary figures still show that Hunt has significant ground to cover since Deyalsingh won by over 800 votes.

Hunt says that his team was prepared to go through the ballots one by one, but he alleges that the EBC’s officers have made it difficult.

“The Returning Officer clearly indicated that she is going to conduct the continuation of this counting of the ballots according to the way it is done in the voting station, where she will hold up each slip, show you the front and then she’ll turn it around and show you the back,” he explained.

Hunt said the difficulty in this lies with the distance at which he must stand from the officer since he can’t see that far ahead.

He said the officer also claimed that they would be provided with a sample of the initials to match the ballots against, but this wasn’t done.

Another request Hunt’s team made was to have access to the polling station diary which records the information of voters who didn’t have identification cards. Hunt said his reason for wanting to see it was so that they could level out the number of voters in that station.

“We have been requesting this since the first day and we have been denied that opportunity.

“Basically, they are flouting the rules and regulations that govern the process of this recount,” he alleged.

Narcis-Scope refuted this claim, saying that nowhere in the legislation governing election recounts does it make absolute provisions for the polling station diary to be provided to the candidate.

She said a recount is simply that; a count of the ballots and poll cards.

The Chief Election Officer also reassured that all Returning Officers are following the instructions given to the letter of the law and that all recounts will be guided by the same procedure.

With delays like this looming, a final tally for the St Joseph constituency could be days away and the matter may eventually find itself in court.

Even if the seat is eventually turned over from the PNM, the UNC would have still lost the election with a seat count of 21-20.