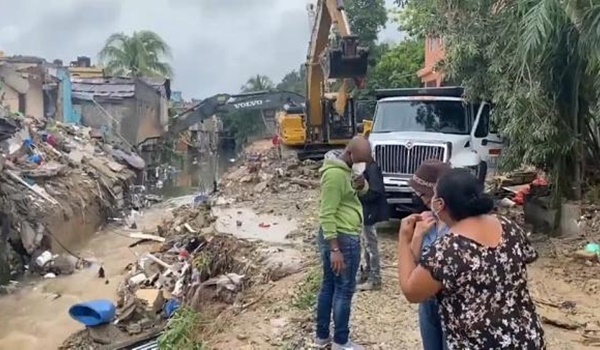 Tropical Storm Laura wrought death and destruction as it raked Haiti’s southern peninsula on Aug. 22 and 23.

On Mon., Aug. 24, Haiti’s Directorate of Civil Protection (DPC) issued a partial report putting the death toll at 20, including eight women and 11 men, in the South-East, West, and South Departments. Five people are missing (two children and three adults), according to the DPC.

The agency also reported that four people were injured in the West and South Departments, 198 families were affected in the Nippes Department, 15 houses were destroyed, 135 damaged, and 447 flooded.

Homes crumbled as high winds and floodwaters raced through towns in Laura’s path — causing some residents to flee for safety in the middle of the night and government officials to issue a red alert.

Besieged residents said they were caught unaware and implored the government to help those left homeless.

The Haitian government could have used more of its resources, including social media, to warn people about Laura, said Luigi François, an independent certified disaster preparation agent based in Tabarre, Port-au-Prince.

“Tropical Laura quickly changed its direction, so it became a surprise somewhat to everybody,” François said. “They could’ve reached more people and given them more information.”

Among the hardest-hit towns are Anse-à-Pitres, located on Haiti’s frontier with the Dominican Republic, Jacmel in the Southeast, and Pelerin, Tabarre, and Pétion-Ville in the Western region.

In Tabarre, Le Nouvelliste reported that a mother and her infant went missing after the floodwater carried them away.

Anse-à-Pitres reported three deaths, according to Casséus Nixon, a local agricultural company plant manager. An eight-year-old boy died after the wind ripped off the roof of his house and a cement brick fell on his head, Nixon told The Haitian Times. A woman, Anilice Bonicet, and an unidentified man died in the floodwaters.

At least 15 homes were torn apart, five of which were completely destroyed in Anse-à-Pitres. About 35 people sought shelter at a nearby school, Rêve d’Enfant. Twenty of them later left when the storm eased up in the afternoon.

The rain started on Sat., Aug. 22 around 6 p.m. It grew worse in the wee hours of Sunday and was accompanied by heavy winds. In Anse-à-Pitres, located near Pavrot Bay, the winds battered boats, including Métropole du Sud’Est, a well-known cargo ship. The winds also destroyed several plantations, Nixon said.

Mimose Laguerre fled her home, along with seven other adults and children she lives with, after a roofing beam fell off and water poured into the house.

“We got scared and rushed outside,” Laguerre, 35, said. “We started walking through the floodwaters in the streets. We had to do it with the kids. We didn’t even know where we were going.”

They soon met with an overnight security guard with SADHANA, the local agricultural plant. The guard took them to shelter at a home owned by Nixon.

Laguerre said she didn’t know the storm was coming. Anse-à-Pitres does not have electricity often enough for people to receive the news regularly.

Civil Protection, the government agency tasked with storm warning and recovery efforts, warned residents about Laura, but the storm changed course and came earlier than expected. According to The Weather Channel, Laura was supposed to pass through the northern and central regions. South Florida TV station NBC6 predicted the storm would pass through Haiti around 8 a.m. Laura shifted toward the south and was at full force around 2 a.m. instead.

The rain finally stopped around 7 p.m. in Anse-à-Pitres.

Despite the changes, François said, more chatter about Laura would have informed more people about the storm’s trajectory and potential damage.

Over in Jacmel, Laura started slowing down in the afternoon. The one death reported to date there is of a woman in her 50s who perished as she crossed the Gosseline River.

The storm has left scores of people around the country either homeless or too afraid to return home.

“The house was shaking,” Laguerre said. “I don’t know when I’m going back, it was shaking.”

Nixon implores the Haitian government to help the people impacted.

“The first thing the government should do is help people reconstruct their home,” Nixon said. “I’d love for people to do a follow-up and make sure the victims have a space they can stay for when a disaster like this strikes. And to give them a way to get back on their feet.”

This article is updated from one originally posted on the Haitian Times website on Aug. 24.