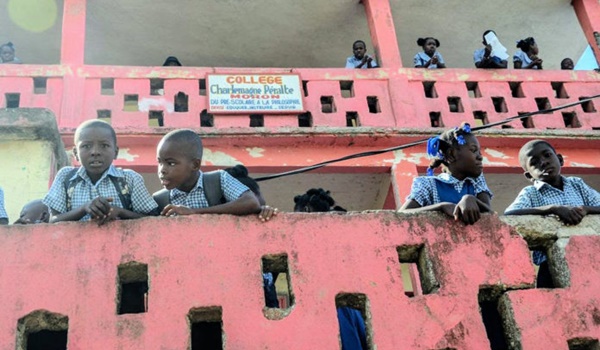 Virtual Classes in Haiti Challenged by Lack of Electricity, Computers, and Internet

s a result of measures the government is taking to slow the spread of Covid-19, many students in Haiti may have to learn virtually. These students face electricity challenges, minimal space at home to attend classes, as well as a lack of access to computers and the internet.

Earlier this week, Haiti’s Ministry of National Education announced that classrooms should contain not more than 30 students, while recommending a distance of one meter between children. The ministry also recommended that schools with larger class sizes hold courses in rotation, with groups of students attending class in-person on three designated days of the week. Morning and afternoon shifts were also an option for schools.

As of Aug. 4, Haiti has recorded some 7,511 coronavirus cases, although these numbers are likely a significant undercount. As of Jul. 20, the country is no longer in a state of emergency, which the government declared in March in response to the novel coronavirus.

“To work online and provide classes via Zoom, Microsoft Teams, or on Google is a utopia here in Haiti,” said Michelle, a school director in Port-au-Prince, who declined to provide her real name for fear of political repercussions.

Disruptions have plagued Haiti’s schools for nearly a year, as schools closed first in response to last fall’s political protests – a shutdown known as “peyi lòk” – then in response to the pandemic in March. On average, schools operated for about 70 of the 120 days required for a full school year.

Technology access issues aside, some schools lack the capability to ensure proper sanitation and provide personal protective equipment when students do come to the classroom.

“To tell you the truth, I am really afraid, because there is no infrastructure, specifically in schools where I am teaching,” said Kerventz Sylus, a foreign language instructor, referring to a lack of soap and water for hand-washing. Sylus works at a private school called Mijep in Thomassin.

Sylus and a friend plan to sew masks for students before the start of classes in August.

Michelle, the school director, said many of the students in her school are from lower socioeconomic classes and communicating with them was difficult during “peyi lòk.” She estimated that only 10% of the parents have an email address. Some did use Whatsapp, with which they sent school work.

“It was difficult, but other parents who were aware that I was sending schoolwork, they got in touch with parents who had children in the same class to obtain the schoolwork,” Michelle said.

While the number of people with access to home internet remains very low, about three-quarters of Haitians over the age of 18 have access to a smart-phone. Although there is limited 4G service in and around the capital, most people have to access the internet and use applications with 2G and 3G data speeds.

“All the time it goes down to a level where the users can’t even use WhatsApp,” said Jimmy Pierre, who runs a school in Kenscoff called “The Successful Institute.”

Digicel, the country’s largest telecommunications company, plans to continue updating its network to provide 4G access in rural regions of Haiti, mostly in the country’s south.

“There is no electricity, and even less now with all the power shortages and diesel shortages,” Boute continued. “And even when we work with schools to try and equip them with electronic methods for learning and for distance learning, this is the main challenge.”

Boute is also co-founder of Surtab, an education technology company that develops solutions for schools. The company has worked with more than 300 schools throughout Haiti to provide mobile classrooms, which include carts of about 50 tablets and a solar installation for charging. He noted that the cost of about $15,000 can be prohibitive.

Surtab also offers another solution that allows parents to purchase tablets with downloaded curriculum materials. This has the potential to help students, particularly in rural areas, who face internet connectivity issues.

“Electricity is the biggest challenge, and then the cost of providing equipment to the students,” Boute said.

Since some do not have access to electricity or internet, Michelle said it might not be possible for educators to schedule specific times when everyone has to be online. She suggested that teachers should film themselves teaching lessons, then share the material for students to view, whenever they get access to the internet or a computer.`

“Everyone can’t go to school, and not all schools can provide social distancing, so personally, I believe that each course should be filmed by the teacher in a suitable environment, so that students can hear well and understand, as well as replay as often as they want,” she said.

While some schools have provided parents with written materials and exercises, Boute said many schools are not able to do this. He fears that students might miss another school year.

“Between the riots and then COVID, they’ve missed this year entirely,” he added.

Many schools in Haiti are not electrified, but even if they were, households have also struggled with electricity access.

“A lot of houses, a lot of families, and even the country cannot provide electricity now,” Pierre said.

The lack of electricity could disrupt home internet for those who have it and make it impossible, in most cases, to charge laptops, tablets, and smart-phones. Sylus said he uses a car battery to charge his phone and shares access to this makeshift service, so neighbors in Thomassin can do the same.

“I have to, because there is no electricity in the country, for months,” he said.

This summer, a shortage of diesel, which is used to power generators, has made an already bad electricity shortage even worse. The government is also in a contract dispute over two 18 megawatt turbines at the Peligre power plant, and four government-owned power plants, including Varreux, have damaged engines. The government took back control of fuel imports earlier this year, and the country has suffered three fuel shortages since June.

Fuel shortages have not impacted Digicel’s network yet. “We have reserves for diesel, and every single one of our cell sites has a diesel generator, so we generate our own power and we have some extra strategic reserves in case of these types of shortages,” said Boute, who added that he expects a new shipment of diesel shortly.

The difficulty of virtual education could further expose the country’s wealth inequality, as wealthier Haitians are more likely to have their own generators, or even solar panels, to power their homes and rely much less on electricity from the government.

“When you are in a poor community, you don’t have electricity,” Sylus said. “If you are not able to find even basic things like food and good water to drink, how could you pay for internet service?”

An earlier version of this article was published on the Haitian Times website.