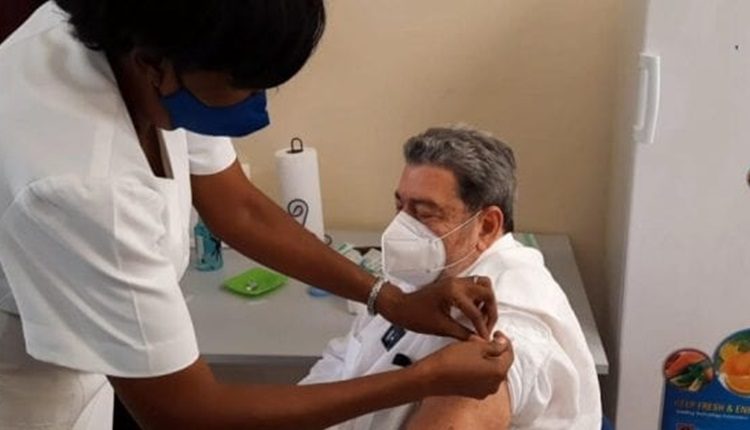 Prime Minister of St. Vincent and the Grenadines, Dr. Ralph Gonsalves is encouraging Vincentians to get vaccinated against COVID-19 once vaccines become available.

His exhortation came a week after saying he was in “prayerful consideration” about whether to be among the persons to receive one of 20 doses of the Russian-developed Sputnik vaccine donated to St. Vincent and the Grenadines.

After saying he was concerned about being accused of jumping the queue, Gonsalves and his wife, Eloise, received the vaccine last week.

At a Ministry of Health press conference a few days later, he extolled the virtues of vaccines although stressing that immunization would not be mandatory.

“This is another vaccine and it’s a vaccine for a virus which is not an automatic death sentence. It’s a killer, to be sure, but we see the persons who have died here in St. Vincent and Grenadines are those with severe comorbidities.”

Prime Minister Gonsalves appealed to “the ordinary man and woman in St. Vincent and the Grenadines, people who have a reasonable temper” to follow his lead, but said those who felt very strongly about not taking the vaccine did not have to.

“All I’m urging our people to do is not to bother with them. If they don’t want to take it, nobody [is] going [to] force them. Nobody’s forcing anybody to take the vaccine. It’s a voluntary programme. But on the basis of the science which is available, it is wise; it is sensible to take the vaccine, both in relation to what is reported in the science.

“People who don’t want to take it… don’t take it; but I believe the vast majority of people in St. Vincent and Grenadines will take the vaccine despite attempts by anti-vaxxers or persons, even though they’re not anti-vaxxers, who have a skepticism.

“The science tells us that it is sensible to take it. I’d have to believe that all the scientists in the world, at least mainstream scientists, are manipulated by some evil set of figures and some conspiracy. I don’t believe that and I don’t think reasonable people will believe that or think so,” he said.

Stressing his confidence in the vaccine, Gonsalves added: “I value my life. I am 74. I’ll be 75 this year. I want to live more years. Although I have lived more years than I have remaining left to live, I have taken the Sputnik vaccine because I am satisfied not just with the reports coming from Russia itself, which I’ve read, but also in The Lancet magazine – the journal in the United Kingdom, a reputable journal –and our people in St. Vincent and Grenadines, the epidemiologists, the medical people who deal with these matters, they advise me that all of these vaccines are safe. The Sputnik, the AstraZeneca, the Moderna, the Pfizer….”

Prime Minister Gonsalves added that if a reputable entity approves the single-dose Johnson and Johnson vaccine, he would have no problem with it either.