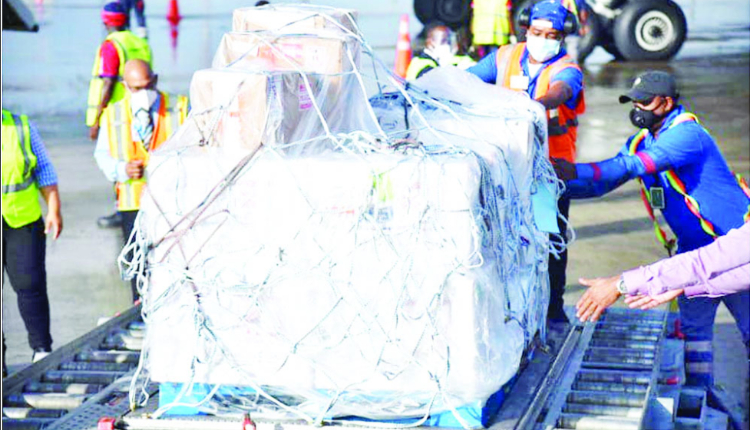 Guyana’s immunisation campaign to protect citizens against the COVID-19 pandemic got a major boost with the donation of 80,000 Oxford-AstraZeneca vaccines from the Indian Government.

The vaccines arrived at the Cheddi Jagan International Airport (CJIA), Timehri, on Sunday where Indian High Commissioner, His Excellency, Dr KJ Srinivasa, officially handed over the batch of vaccines to Guyana.

Prime Minister, Brigadier (Ret’d) Mark Phillips, who is also the Coordinator of the National COVID-19 Task Force, along with Health Minister Dr Frank Anthony and Foreign Affairs and International Cooperation Minister Hugh Todd were at the airport to receive the jabs.

During a press conference after the handing over ceremony, Prime Minister Phillips disclosed that this batch of vaccine will be used to immunise members of the Joint Services and teachers.

According to Phillips, this vaccination campaign is part of Phase Two of the PPP/C Government’s plan to deal with the COVID-19 pandemic. The first phase dealt with the emergency measures put in place to fortify the health system to deal with not only the spread but the tracing and treatment of infected persons.

However, the Prime Minister noted that with Phase Two already on the way, more COVID-19 jabs will be required as the immunisation programme expands to cover more categories of citizens. On this note, Phillips urged persons to ensure that they take the jab to protect themselves against the life-threatening virus.

“While we thank the Government of India for providing the vaccines, it’s an opportunity for me to appeal to the Guyanese people to come forward and take the vaccine,” he posited.

High Commissioner Srinivasa outlined that the donation not only signifies the depth of friendly relations between the two countries but also his Government’s commitment to the world as the first responder to this global health crisis.
“By delivering this Covishield (the name the jab is being traded as in India) vaccine, India has demonstrated its willingness and ability to work with its friends across the world especially developing nations in a spirit of South-South cooperation,” the Indian diplomat noted.

He further noted that the foundation of India’s donation of COVID-19 vaccines across the world is a part of Indian Prime Minister Narendra Modi’s vision of cooperation and collaboration to fight this pandemic.

But according to the Indian High Commissioner, India’s Vaccine Maitri (vaccine friendship) which has been dumped by the world media as “vaccine diplomacy”, is purely an effort to actualise his country’s commitment to the world with nothing expected in return.

He went on to remind that already Guyana has benefited from a US$1 million donation to upgrade its health infrastructure along with over 35 ventilators, face masks and other PPE as well as pharmaceuticals.

The Oxford-AstraZeneca vaccine was developed in the United Kingdom and is being manufactured in India by the Serum Institute of India, the world’s largest vaccine manufacturer.

India has set aside over 500,000 AstraZeneca vaccines for the Caribbean and Barbados has donated a portion of its 100,000 doses to Guyana.

Guyana rolled out the administration of the COVID-19 vaccines to frontline workers on February 11, with the 3000 doses of the AstraZeneca vaccines from Barbados. Those jabs have already been used to vaccinate over 2000 frontline healthcare workers.

Last month, the Health Minister had said they would administer all 3000 vaccines as the first dose and await the arrival of follow-up jabs for the second dose.

At the press briefing on Sunday, Dr Anthony explained that Guyana now has approximately 100,000 doses to vaccinate citizens.

“With the vaccines that we currently have – we have about 100,000 now – that would help us to immunise about 50,000 people because we’re doing two doses. But this is not going to be enough if we want to reach heard immunity by the end of the year,” he contended.

According to the Health Minister, they have been looking at other opportunities to procure more of the COVID-19 vaccines.

High Commissioner Srinivasa disclosed on Sunday that his country recently approved an indigenous jab – COVAXIN, which was produced by Indian company Bharat Biotech and the Indian Council for Medical Research. The vaccine is now available for distribution across the world with over 81 per cent efficacy.

In fact, Srinivasa revealed that Brazil has already ordered 20 million doses and so too has many other countries in the Middle East, South East Asia and Africa. The diplomat noted that even Guyana will be able to access this new jab.
As such, Dr Anthony noted that with Guyana needing to procure more COVID-19 vaccines, it is looking at acquiring COVAXIN and is already in talks with the Indian Government in this regard.

“Our Food and Drug Administration have examined the data pertaining to this vaccine because we had prior information from the High Commissioner here. And we have looked at the safety profile and all of that, and we’re quite satisfied. It would be interesting for you to note that the vaccine that Prime Minister Modi took is actually the COVAXIN vaccine and that actually demonstrates the confidence that the Prime Minister and India has in this vaccine,” the Minister pointed out.

Meanwhile, Guyana is still awaiting the arrival of another 100,000 vaccines from the COVAX facility, which will arrive sometime this month.

“We have been working with COVAX facility and they had promised to give us vaccine for 20 per cent of our population. We have not started receiving those vaccines as yet but we have been written to and we expect that very shortly. So, we will be getting 100,800 doses very shortly,” Dr Anthony posited.

Additionally, Guyana also received 20,000 doses of China’s Sinopharm vaccine last week. The country is expecting to get another donation of the Sputnik V vaccine from Russia.

Jamaica has received its first shipment of the Oxford-AstraZeneca vaccines that were donated from the government of India.

The 50,000 doses of vaccines arrived on Monday, March 8, at the Norman Manley International Airport in Kingston.

Healthcare workers across the island have already begun scheduling their appointments to get the shot later this week.

The Ministry of Health and Wellness said it also expects some 14,400 doses of AstraZeneca vaccines on or before March 11.

Another 1.8 million doses are to be supplied to Jamaica, starting in April, under the African Medical Supply platform.

The Government also announced, previously, that they have the resources to secure vaccines for some two million Jamaicans. They say they want to vaccinate 65% percent of the population by March 22.

The vaccination program will be rolled out in three phases: phase one is categorized as vulnerable groups; phase two, essential to economic activity; and phase three, the general public.

The arrival of the vaccines come one day after the island recorded 878 new cases of COVID-19, the highest one-day total that has been reported on the island thus far.