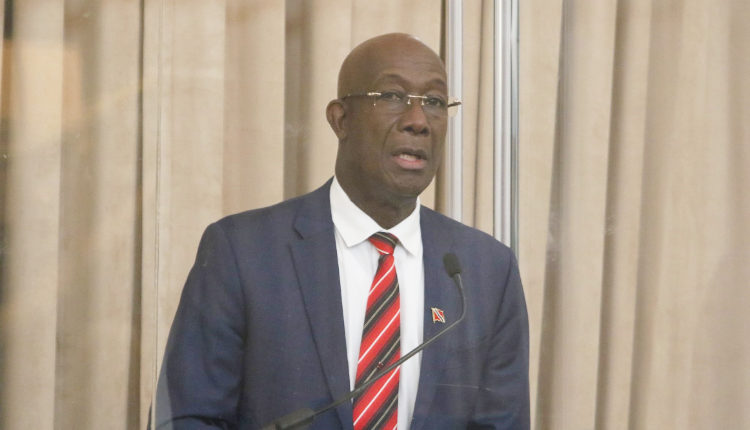 Prime Minister Dr Keith Rowley this afternoon called an urgent press conference and disclosed that the country had recorded an unprecedented number of Covid-positive cases over the last 24 hours – 328.

The following restrictions were announced.

1. As of midnight, all restaurants and bars will be closed.

2. All malls will be closed.

3. All places of worship will be closed.

4. All gyms and fitness centres will be closed.

5. All spas, beauty shops and hair dressing salons will be closed.

6. Casinos, betting houses, cinemas, theatres and clubs will be closed.

7. The public service will operate on essential service only.

8. Tobago will be isolated by limiting the amount of flights in and out, limited to three flights a day.

9. The sea bridge will operate on 25 per cent capacity.

10. All tours to various areas of recreation, the Bird Sanctuary, Buccoo reef, etc ,will end.

11. Gathering continue to be limited to groups of five.

12. Mask wearing continues to be enforced.

This period of response will be enforced until May 23.

Rowley said the existing law would allow the police to intervene in private spaces to take action in this public health emergency.

Rowley, who was a Covid-positive victim, but considers himself “one of the lucky ones”, said he met with the Covid Response team this morning, and reviewed the situation in Trinidad and Tobago regarding the Covid infections.

He said today’s number, with many hours still to go, was 328, which were the confirmed infections of person found through contact tracing or those who came forward.

He said there were many other asymptomatic victims, and those not coming forward.

He said the conclusion was that the level of infections in Trinidad and Tobago was reaching disturbing heights.

He said there were some recent interventions to prevent the country arriving at a national disaster.

And if there were not more interventions, the effect, as seen in other countries, would be a large number of sick people, people dying because they were not getting the attention, and sick people spreading the virus widely.

He said when the vaccines were authorized and started to be distributed, the reaction of the population was to let its guard down.

He said this was not so, and now vaccines were not available because the suppliers were being dominated and controlled by a few.

He said this morning, the Government received the worse news, in that something happened in Baltimore in the United States, where the vaccine was being produced.

He said the examination at the factory where the vaccine is being produced, is that there was contamination, which was not good news for T&T.

He said dropping guard and getting tired of fighting the pandemic has led to “unbelievable acts of dotishness” which led to an increase in the level of infection in the country.

He said people were socializing in the aisles of supermarkets.

“Who are these people?” he asked.

He said that in some of those gatherings, there were people from babies to octogenarians, and these gatherings were driving up the numbers.

As a result of the increases, Rowley said the only thing done now to evade a disaster brought on by Covid 19 was to intervene and interrupt the spread of the virus.

Rowley said the Health Ministry had 38,000 vials of vaccine to be used as the second dose of those already vaccinated.

Instead, the decision was taken for it to be used as a first dose instead.

As a result, more than 80,000 people in T&T would have received that first dose.

One dose was better than none, he said.

He said that the national discussion would now be the detrimental effects of the new lock-down measures.

He asked “what are the effects on not doing this?”.

Regarding the closure of the borders and stranded national, he said that the country was close to the stage where new entry requirements would have allowed vaccinated people into the country.

“But just as we were doing that, this situation developed”.

He said there would be no change to the border policy for the next three weeks.

Regarding financial assistance to the thousands of people who would now be affected by the new lock-down, Rowley said the Minister of Finance would now be trying to find out of the existing social net could be preserved.

“We do not have the resources now, to be as helpful as we were last year.”

He said all of Trinidad and Tobago could expect a negative fallout from the new restrictions.

He implored people to stay at home, and not encourage family members to visit.

“You could lose your life” he said.

Rowley said that there were no new restriction on the movement of people in public spaces.