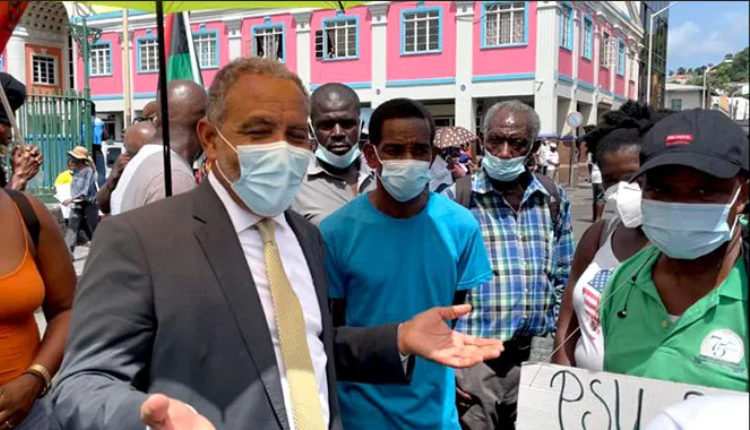 Opposition calls for ‘robust and determined … peaceful and lawful’ protest on Sept. 9

The opposition New Democratic Party (NDP) says that it will continue, on Sept. 9, protest against the change to the Public Health Act, will mandates COVID-19 vaccination for certain categories of “frontline workers”.

“On Sept. 9, when Parliament meets again, the people will continue our protests on the streets of Kingstown. These actions are to be robust and determined while being peaceful and lawful, in a manner that proclaims and elevates our democracy,” Opposition Leader Godwin Friday told a party press conference, on Wednesday.

“Our actions are to defend and promote democracy; to oppose in a direct manner the unpopular legislation and policies of the government as reflected in the changes the government made to the Public Health Act three weeks ago to allow for mandatory vaccination! In the present context this means paving the way for mandatory COVID vaccination.”

A large number of persons joined the demonstration in Kingstown on Aug. 5, which was punctuated by violence in the evening.

In separate incidents during the protest, police struck some protesters with batons, injuring them, and Prime Minister Ralph Gonsalves was injured when he was struck in the head by an object, allegedly thrown by a protester.

Friday said that the actions of the government, which brought people out to protest “are still confronting us”.

“So, the amended Public Health Act is on the way to becoming the law of the land,” Friday said of the law, which will take effect when it is assented to by Governor General Dame Susan Dougan.

“It is important that the broader society lend support to the trade unions as they represent their members. They were an important part of the protest action on Aug. 5.”

The Public Service Union and the St. Vincent and the Grenadines Teachers’ Union, the main workers’ rights advocates on behalf of public sector workers, as well as the Nurses Association, and RISE Hairouna, an advocacy group, joined the Aug. 5 demonstrations.

For the first time in about two decades, public sectors workers, including nurses and Customs workers, donned their uniforms as they demonstrated against the government.

This week, the PSU issued a press release, saying that its members have voted to withdraw their services from Sept. 7 to 10 in response to the government’s amendment of the Public Health Act.

The union said that the nurses have decided to take a similar course of action during that period and have informed the governor general, in keeping with the Essential Services Act.

The PSU said that nurses believe that the amendment to the law “will strip the rights of essential workers, in the first instance, to choose to be vaccinated or not”.

Friday said that he had read the release of the PSU and had heard the comments of their leaders about the industrial action.

“But also I wish to encourage all our (NDP) members and people, generally speaking, to support the political action as well. That is, to come on the streets of Kingstown on Sept. 9 to continue their support for democratic rights and to protect against further erosion of our democratic rights.

“I urge everyone to join in common cause with the trade unions and other associations to defend against the erosion of our fundamental rights and oppose mandatory vaccinations.

“Particularly, I call on NDP supporters, all, to come out and show your support but also to show your disapproval of the government’s measures and to support those who are standing up for their fundamental, which are, indeed, the protection of the rights of all of us.

“We must insist that the government engage in meaningful dialogue with the stakeholders on the way forward and out of this COVID crisis.”

The NDP supports vaccination against COVID-19 but is opposed to mandatory vaccination.

“Too many people are concerned about the changes to the Public Health Act and, indeed, oppose it, for the government to act unilaterally in passing the law, and to continue to act in this manner,” the opposition leader said.

“They would do it simply because they have the power in Parliament to do it. So only the people by taking direct action through peaceful protest can insist that they stop and listen to them.

“The government – this ULP government — has been acting unilaterally for far too long; proceeding without any serious consultation with and involvement of other stakeholders in decision-making when it really matters. It is time that this approach comes to an end; it has been good for our country.

“It has led us to an economic and political crisis in St. Vincent and the Grenadines.

“So, I encourage all individuals, social groups, churches, trade unions, business associations, artistes, sportsmen and women to come out and support the rally on Sept. 9. That’s when the Parliament next meets. So, on Sept. 9, I am urging all our citizens, all Vincentians to stand up and be counted,” Friday said.