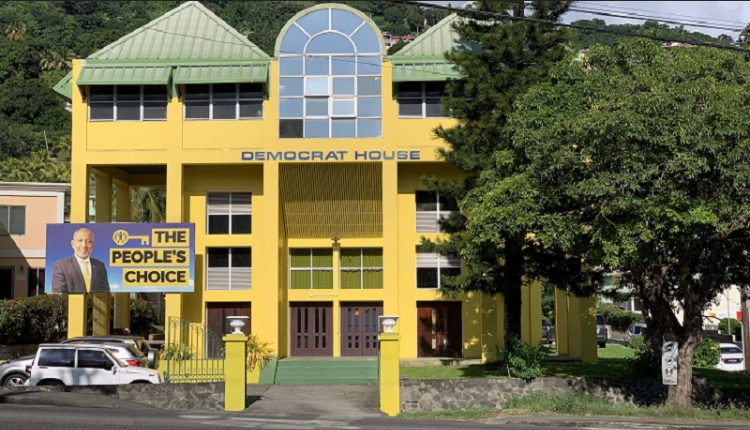 Friday was speaking to the arrest on Wednesday, of opposition spokesperson Colin Graham and the party’s General Secretary Tyrone James.

He said all these actions that have been taking place stems back to a protest on August 5, one of the largest the country has seen in years.

“Yesterday at my office, the police came into the New Democratic Party’s office building. There were four officers, so I am told, that entered the building towards the leader of the Opposition office.

I was told they were looking for the party’s General Secretary, Tyrone James, and having met a staff member, they were told he was not in the office, they left.

When asked why they have not arrested or searched his home as yet, Friday said, “Maybe they are saving the best for last”.

Friday said what is happening in SVG ought to make international news.

“At no time in our history or indeed not post-colonial history were senior members of a political party arrested by the police.

This has never happened, where an arm of the state was brought to bear or to prevent opposition persons from organizing a peaceful protest in Kingstown or anywhere else.

Does it mean now that if an individual in a constituency sees something wrong and wants to protest about it, they now have to worry about being arrested? Where is the democracy in this country?”.

Leader of St Vincent and the Grenadines Public Service Union says that anything is expected after what has happened in the last couple of weeks.

Elroy Boucher, head of the PSU, responded to a question asked by Luke Boyea of Hot97 on Thursday about whether he was worried that the police might come knocking at his door.

“Nothing will surprise me; it appears now that the trade unions are the enemies of the government, simply because they don’t agree with some of their policies”.

Boucher says the PSU, the Teachers Union and Nurses share the same view on the Public Health Amendment Act.

According to the unions, the changes to the Act makes it mandatory for some categories of workers to be vaccinated.

The government have consistently said there would be no mandatory vaccination on the island.

Over the last few weeks, several opposition activists were picked up by the police and charged following a protest in Kingstown on August 5, leaving Prime Minister Dr Ralph Gonsalves with an injury to the head.

Two prominent members of the main opposition New Democratic Party (NDP) were charged, on Wednesday, with public order offences over protests in Kingstown in July and August, brining to four the number of persons so charged.

On Wednesday, police arrested the party’s general secretary, Tyrone James, a retired Coast Guard commander, as well as Colin Graham, an NDP spokesperson and slapped them with four charges each.

The men’s lawyer, Kay Bacchus-Baptiste, told iWitness News that they were each charged that on July 29, at Kingstown, they did organise or were concerned with organising a public procession, without notifying the Commissioner of Police at least 24 hours prior.

Another count of the same charge was brought against the duo, allegedly committed in Kingstown on Aug. 5.

The two were also each charged that on the same dates — July 29 and Aug. 5 — in Kingstown, they did knowingly take part in a public procession or meeting, in contravention of the Section 5(1) and Section 5(2) of the Public Order Act.

They were each granted station bail and ordered to appear before the Kingstown Magistrate’s Court on Thursday to answer the charges.

The charges against James and Graham are the same as those brought against Adriana King, a teacher, and Kenson King, a prison officer, last month.

In a Facebook post at 6:23 p.m. ,on Wednesday, Graham told his social media network that all was well with him.

“For all who was trying to reach me, I was arrested around 2 pm today and taken to Central Police station, I was questioned by members of the CID and had 4 (Four) charges laid against me of which I have to appear in court tomorrow morning to answer. … I am out on bail and all is well!! Stay Strong My People!!!” Graham said.

Meanwhile, in a video published to the Facebook page of Bryan Alexander, an NDP activist, at 5:46 p.m., James said that he was on the way to the police station, having received calls from his office and home “that heavily armed Black Squad police officers had come to look for me.

“They came to the NDP headquarters. I wasn’t there. And they went to my home. I wasn’t there also. But the thing is, these heavily armed police officer, my children were very scared. One of my kids was asking me if the police was going to shoot me, given the amounts and guns that she saw — assault rifles.”

James said that he had spoken to his lawyer who contacted the commissioner, who said that police wanted to interview James.

“But, after some time, he then told her they wanted to arrest me. So I am on my way now to the police station to see what they are arresting me for…” James said.

The arrest and charges come as protests are being planned for outside Parliament in Kingstown on Sept. 9, over the government’s vaccination policy as well as the national issues.

“… I am asking Vincentians to come out in your numbers, stop this nonsense that is going on in St. Vincent and the Grenadines. They are trying to pick us off, cherry pick us and move us away to prevent things from happening in this country. We must stand up to this regime. We must stand up. Vincentians, if you want to protect your democracy, come out on the 9th and stand up,” James said.