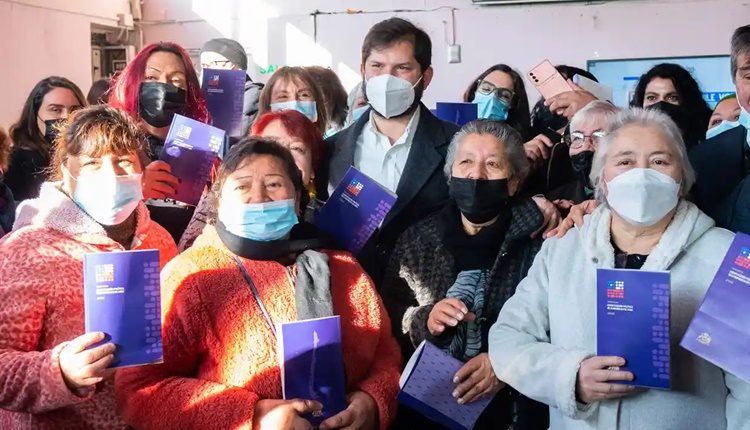 Chile is updating its constitution for the 21st century. The US should follow its lead – For David Adler

“E very constitution,” Thomas Jefferson wrote in a 1789 letter to James Madison, “naturally expires at the end of 19 years.” Two centuries after its expiration date, citizens of the United States are suffering the consequences of a constitution drafted by 55 men who owned hundreds of human slaves, thousands of acres in landed estates, and millions of dollars in inherited wealth. Fundamental rights denied, foundational institutions paralyzed and existential crises ignored: these are side-effects of a legal framework that has not been meaningfully amended in over a half-century.

The US is not alone. Scores of constitutions around the world were written by dictators, colonizers and military occupiers to enshrine institutions that are undemocratic by design and unfit to cope with crises like a rapidly heating planet. In some cases, like the UK, the constitution was never actually written at all, setting the political system on a precarious foundation of norms and conventions that leaders like Boris Johnson have proven all too eager to discard. When a cross-party committee convened in 2013 to review the UK’s constitutional chaos, its recommendation was nothing short of radical: that the government should consider “preparations for a UK-wide constitutional convention”.

But while both the US and the UK remain trapped in constitutional deadlock, the Republic of Chile has just concluded its own nationwide convention to replace the 1980 decree by the dictator Augusto Pinochet and his military government. The product of the convention is a visionary document that would not only update, expand and advance Chileans’ basic rights – to health, housing, abortion, decent work and a habitable planet – but also set a new standard for democratic renewal in the 21st century.

Like that of the United States, the current Chilean constitution was written under extremely undemocratic conditions. Pinochet came to power in a bloody coup to overthrow President Salvador Allende, and set to work designing a constitution that would consolidate executive power, constrain democratic representation, and enshrine free market fundamentalism. Along with a clique of economists known as the “Chicago Boys” for their training at the University of Chicago, Pinochet set the country on a path of such extreme neoliberalization that Chile would become the only country in the world with a constitutionally privatized water system.

The consequences of the Pinochet constitution were all too easy to predict – and will be too familiar to readers in the US from which its ideas were sourced. Inequality soared: Chile became the most unequal country in the OECD, with an income gap 65% higher than the OECD average; the combined wealth of its billionaires totals 25% of GDP. Debt exploded: Chile’s tuition fees rank among the highest in the world, trapping students in cycles of debt repayment that can last a lifetime. Precarity accelerated: the percentage of jobs on short-term contracts has grown to 30, while roughly half of all workers report being unable to save enough to fund their retirement. Even its famous system of privatized water crashed: millions of Santiago residents are regularly left without access to running water, as Chile moves into a period of severe water stress.

In October 2019, millions of Chileans took to the streets to protest these intolerable conditions. Kicked off by a hike in public transportation fares by sitting president Sebastián Piñera, the protests quickly grew into a revolt against the country’s entire constitutional order – its neoliberal orthodoxy, its authoritarian governance, its absence of human rights protections that were on display in both Pinochet’s murderous regime and Piñera’s violent repression of the 2019 protests. “Constituyente o nada!” the protesters shouted: constituent assembly or nothing. One year later, Chileans turned out in record numbers to vote in a special plebiscite organized in the wake of the protest movement: 78% voted for a new constitution, and 79% for a convention of elected citizens to write it, rather than career politicians.

At a time when democracies are ravaged by violent polarization, Chile’s convention has charted a path to peaceful renovation. Led by women, the convention brought together workers, Indigenous peoples and parties from across the political spectrum to draft a new constitution over the course of a year of careful deliberation. The result is a document that responds directly to the escalating crises of inequality, insecurity and a changing climate. The constitution establishes new universal public services for health, education, and clean water. It endows nature with rights and protects Chile’s glaciers, parks and big bodies of water from environmentally disastrous mining. And – four decades after Pinochet’s decree – it finally turns Chile into a full democracy, with gender parity in public institutions, self-determination for Indigenous peoples, collective bargaining for all workers and the right to vote for all Chileans over the age of 16.

But the campaign to de-legitimate Chile’s constitution is already under way. Even before the convention had taken its seat, commentators at the Wall Street Journal had labeled it a “suicide mission”. Since then, a relentless “digital war” has been waged to discredit the new constitution by spreading lies and disinformation about its contents. One sitting Chilean senator falsely claimed that the constitution would change the country’s name, flag and national anthem, in a video that went viral across the country. Gender parity is mocked as “woke”. Worker rights are “divisive”. And Indigenous sovereignty is the path to an “Indigenous monarchy”. In its editorial instructing Chileans to vote against the new constitution, the Economist put the new text on a roll of toilet paper. The goal of the attacks is simple: to scare Chileans into a defense of an indefensible status quo.

But Chileans are undeterred. After all, the Economist praised the “rapid success” of the Pinochet coup back in 1973, and most of the parties that presently call to reject the new constitution are the same ones that voted to keep Pinochet in power in the 1988 plebiscite that ended his rule. More than a month before the September vote, the coalition to support the new constitution is growing around the world, exciting everyone from feminists to evangelicals, US politicians to University of Chicago professors. “It’s kind of a miracle that it’s come this far,” said Tom Ginsburg, a University of Chicago professor. The “Apruebo” vote is still trailing in the polls, but enthusiasm for the plebiscite is on the rise. “This 4th of September, it will once again be the people who will have the last word on their destiny,” President Gabriel Boric said.

But their destiny is ours, too. In the 20th century, the US constitution reigned as the model to be emulated by democracies around the world. No longer: its antiquated institutions and an absence of rights have guaranteed its declining influence. Now, Chile has shown the way to a new constitutional order – rich with rights, responsive to the needs of both people and planet – that can set an example for the world in the 21st century. Because, as even Thomas Jefferson recognized in 1789, “the earth belongs to the living, and not to the dead”. From Chile back to the US, may a new movement for democratic renewal now come to life.

* David Adler is a political economist and general coordinator of the Progressive International. This article was amended on 28 July 2022 to reflect that Gabriel Boric is not part of the Apruebo campaign; as president, he can only advocate for participation, not a single side 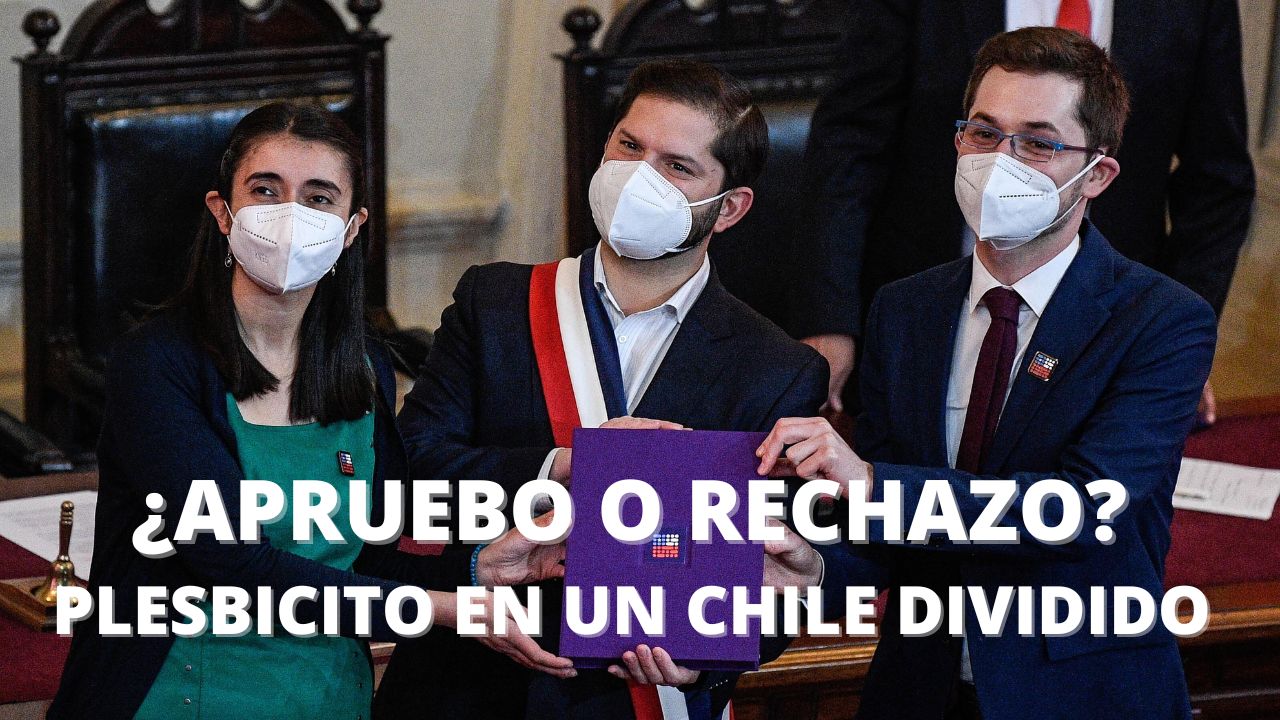 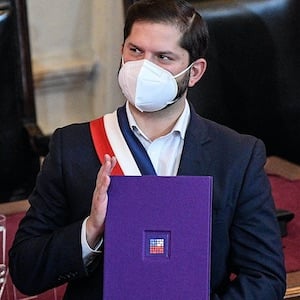