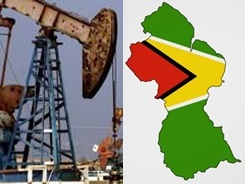 THE Ministry of Foreign Affairs has dispatched a ‘note verbale’ to the Venezuelan Foreign Ministry warning that it desists from taking any actions that could only result in stymieing Guyana’s development and contravening international law.The move on the part of the Guyana Government comes in the wake of a communication being sent from the Venezuelan Foreign Minister to the Country Manager of Esso Exploration and Production Guyana Limited, objecting to the dispatch of a rig to proceed with the exploration of an oil well in the concession granted by the Guyana.

The Foreign Affairs Ministry has since also informed CARICOM, UNASUR, the OAS, and the Commonwealth as well as the United Nations Secretary-General about this recent action by Venezuela.

WITHIN GUYANA’S TERRITORIAL WATERS
Caracas has objected to plans for an exploratory well to be drilled in an area Guyana contends is within its territorial waters.
A subsidiary of U.S.-based Exxon Mobil Corporation had planned to conduct exploratory drilling later this month under a Guyana concession.

Two years ago, a ship conducting a seismic study for Texas-based Anadarko Petroleum Corporation under a concession from Guyana was detained by Venezuela. The ship and its 36-man crew, including five Americans and workers from Russia, Indonesia and Brazil, were well within its territorial waters at the time, Guyana maintains.
The vessel was released after a week.
MARITIME DELIMITATION

That episode led to the two countries establishing a bilateral committee to explore mechanisms within the context of international law to address the issue of maritime delimitation.

To this end, they agreed that a technical team would meet to exchange views on how such delimitation could proceed, but this meeting has since been stalled, in part to developments in that country.

Weeks later, Guyana temporarily placed ranks of the Guyana Defence Force on alert, after a report that Venezuelan soldiers had crossed into a Guyana-held area along the Essequibo River.

Guyana’s government had not taken such a step since 1982, when Venezuelan military planes flew over parts of the area it has claimed in the border issue.

Venezuela has, for decades, claimed two-thirds of Guyana’s territory as its own, arguing that the gold-rich region west of the Essequibo River was stolen from it by an 1899 agreement with Britain and its then colony.

The late Hugo Chavez’s successor, Nicolas Maduro, has previously described the controversy as a relic of the colonial era, and vowed to peacefully resolve the issue in accordance with international law.