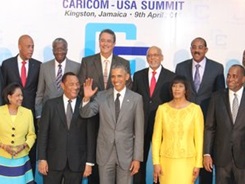 US President Barack Obama announced the formation of an energy fund to finance clean energy projects at the Caribbean Community (CARICOM) US Summit yesterday.

The meeting discussed issues of competitiveness, security and energy as a means to develop the region.

“Caribbean countries have one of the highest energy costs in the world,” Obama said at the start of the Caricom-US Summit which he co-chaired at UWI Regional Headquarters in Kingston. “Today we are announcing new partnerships and a new fund to mobilise private sector projects in clean energy for the Caribbean and Central America.”

“We are going to make sure we deepen our cooperation to economic growth, making sure that our governments are open and transparent while upholding human rights for all citizens, and combating transnational crime,” Obama said at yesterday’s multilateral summit.

The Energy Security Summit in January marked a shift in US policy towards supporting the development of concessional financing for the region in three defined areas — energy, climate change and disaster management. Caricom views the lack of access to such financing as a major impediment to the region’s growth prospects. Many member states have been deemed ineligible for such funds having been graduated to middle-income status by international financial institutions and some development partners with the use of GDP as a primary criterion.

“This meeting should mark a new and positive beginning for the CARICOM-US relationships with a mechanism for partnership in place for the progress of our region and people,” stated Perry Christie co-chair at the meeting and prime minister of The Bahamas in his address.

The summit also reflected on the lingering effects of the Western financial crisis and the absence of real growth in much of the Caribbean.

Prime Minister of Jamaica Portia Simpson Miller utilised part of her welcoming remarks to congratulate the US on its shift towards normalising relations with Cuba.

“You have already broken new ground in US and Cuba relations. You are on the right side of history. You are, I believe, the first US president to engage with our regional body on three separate occasions. This is part of your legacy,” Simpson Miller stated at the Summit. “We welcome the improvement to US and Cuban relations.”

The Caricom US summit on Thursday is part of a two-day official visit by President Obama to Jamaica, preceding the involvement of both parties in the 7th Summit of the Americas in Panama on 10-11 April, 2015. That summit will involve

high-level discussions with representatives from Cuba.

“Mr President, people across the Caricom region followed both your election campaigns with heightened interest, particularly in 2008. Your slogan, ‘Yes we can’, was repeated in every [household]. Your photograph has pride of place in living rooms. Your victories have been our victories,” said Simpson Miller about Obama, the first black president of the US.

Thursday’s meeting was the third time that Caricom leaders have met with President Obama. Previous meetings took place in the margins of the Summit of the Americas in Trinidad and Tobago in 2009 and Colombia in 2012.

Today, President Obama met with Caribbean leaders in a U.S.-CARICOM Summit in Kingston, Jamaica.  President Obama reaffirmed the importance of our relationship with the region, and the United States’ commitment to partner with Caribbean countries to advance economic development, security, and good governance.  Leaders discussed a broad range of issues, from our important trade and investment linkages to security cooperation.

The leaders’ discussion focused on the importance of improving energy security, reducing energy costs, and fighting climate change.  This follows robust engagement on these issues over the last year, including the White House Caribbean Energy Security Summit hosted by the Vice President in January 2015 and the launch of the Caribbean Energy Security Initiative (CESI) coordinated by the Department of State. The United States is deepening this collaboration through the following initiatives:

Clean Energy Finance Facility for the Caribbean and Central American (CEFF-CCA): The United States will launch a $20 million facility to encourage investment in clean energy projects.  The facility will provide early-stage funding to catalyze greater private and public sector investment in clean energy projects.  It will draw on the expertise of the U.S. Overseas Private Investment Corporation (OPIC) and the U.S. Trade and Development Agency (USTDA) in coordination with the U.S. Agency for International Development (USAID) and the Department of State.

Energy Security Task Force: The United States will partner with Caribbean and Central American countries in a task force to evaluate progress in our cooperation and identify concrete steps to advance energy sector reform, regional integration, and clean energy development.

Clean Energy Finance: In January, OPIC formed a dedicated financing and insurance team to advance development of the Caribbean renewable energy sector. OPIC is in advanced talks to finance a 20 MW solar farm in Jamaica, and has already committed financing to Jamaica’s largest private-sector wind farm, a 36 MW facility in Malvern, St. Elizabeth Parish.  OPIC is actively looking for opportunities to support solar and wind energy projects in Jamaica and throughout the broader Caribbean region.

Clean Energy Economy Transition: The Department of Energy assembled U.S. and Caribbean stakeholder working groups to look at opportunities ranging from clean energy, efficiency, diversifying electricity generation, clean transportation and energy education, at the Caribbean Clean Energy Technology Symposium, held in St. Thomas in March. The working groups will report on progress at the 2016 Symposium to be hosted by Jamaica. Also, the Department of Energy will launch a new Energy Scenario Planning Tool¸ building on its Energy Transitions: Island Playbook, to help island communities plan clean energy projects that are most likely to attract investment, capitalize on local resources, and meet energy needs.

Greening Tourism: The tourism industry is the largest energy user in the Caribbean. The Department of Energy, with its Pacific Northwest National Laboratory, and OPIC are undertaking the Caribbean Hotel Energy Efficiency and Renewables (CHEER) initiative, which supports projects to improve energy and water efficiency as well as the exchange of best practices in the hotel and tourism industry.  USAID is launching a complementary project focused on the Eastern Caribbean that will develop new financing tools for energy efficiency and renewables.