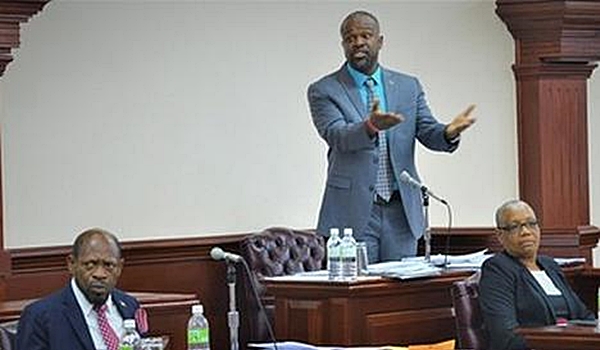 St Kitts-Nevis opposition walks out after MP ejected from parliament

After a back and forth verbal exchange between Speaker of the National Assembly Michael Perkins and Labour parliamentarian Konris Maynard on Tuesday, the MP was ejected from the St Kitts and Nevis parliament, prompting a walkout by all opposition members.

According to Maynard, “democracy is still under threat”, claiming he was ordered to leave parliament for “standing and awaiting the Speaker’s indulgence to ask a question”.

Maynard’s ejection came just after 1pm, on the heels of a sparring bout between the Speaker and opposition leader, former prime minister Dr. Denzil Douglas over comments Douglas made about a certain Chinese economic citizen of the federation.

During a presentation by Prime Minister Dr Timothy Harris, Maynard attempted to raise a point of order, at which point the Speaker told him it would not be allowed. Maynard again rose to interject, and was shot down by the Speaker and warned that, if he chose to rise again during the prime minister’s presentation, “I would have to act accordingly”.

Maynard asked if the chair was taking a decision that members of parliament could not raise a point of order during wrap-ups.

The Speaker told the opposition MP that by being on his feet he was distracting the session, and asked him to take his seat.

When Maynard said the Speaker did not know why he was standing, the Speaker said he found the young MP to be “grossly disorderly” and ordered him to leave the House immediately for the rest of the day’s sitting.

At that point, all opposition members walked out of the parliament.