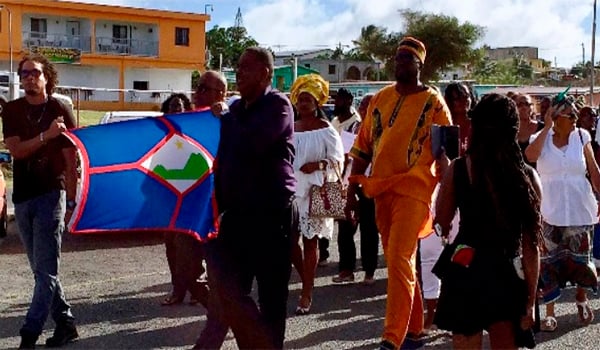 A group of Statians, who have opposed the Dutch intervention in their local government, organized a silent protest from the airport to the special town hall meeting with State Secretary Raymond Knops on Wednesday.

“We want a fair and honest dialogue! We have dreams for our island just like the Dutch have for their country. Let our children carry on those same dreams!”, Jacintha Brice, a member of the Brighter Part Foundation for an autonomous Statia, called out during the protest.

Local resident and Monuments Director Walter Hellebrand: “I spoke with the (Dutch-Government-appointed Committee of) Wise Men and I have a strong feeling that they already had a conclusion of the report before coming to St. Eustatius.” Because of the report of the committee The Hague decided to intervene and take over the local government.

During and after the town hall meeting persons experienced saddened emotions while expressing themselves with their stated questions to State Secretary Knops. Democracy, new elections, the poor selection of the interviewees for the report, broken promises, wasted finances and poor services by the Dutch Government, were topics that were inquired from the audience.

Brenda Van Putten, a pensioner: “This is a terrible situation since we are free people. I am worried because the Dutch can come in within a short time, who is supposed to be a part of us, can make such a drastic decision. I’m hoping that the local government can remain in office or organize an election.”

Cherida Creebsburg, “I am still disappointed since it came this far instead of consultation upfront with everybody. One report that was written by the Wise Men shouldn’t have because this result, I find it much overrated. Consultation with the whole committee will help avoid emotions that don’t need to be there.”

Creebsburg continued, “A bigger positive impact would have been the outcome if there was a consultation beforehand and everyone would have been responsible for the solution. Let’s us work together to find a solution!” The Statians at the town hall meeting expect a lot from the new government, since the ‘old one didn’t do a good job in the eyes of the Dutch.’

Article 132 states that this intervention can take place once there is gross neglect of duty by the administration. “I feel very welcomed here today with also seeing a beautiful island inhabited by committed people. This is worth investing in”, expressed Knops. “Full democracy will be established as soon as possible. Frequent visits by the state secretary will be organized to witness the recoveries and the projects. Challenges that were long experienced by Statians, will now be executed such as infrastructure. There will also be an advisory board containing only locals to give advise to the elected new government. However, the community of Statia will be informed of every decision and are welcomed to give their input wherever possible.”

Two persons were sworn as Island Governor and Deputy for St. Eustatius which is Mike Franco (from Curaçao) and Tubbergen Mervyn Stegers (Dutch). These two persons, who are not local, were chosen due to ‘being neutral and not being a part of the community’. “It is with pain that I have to do this. I’m not happy. This temporary until there are elections. However, we have to ensure that everyone has equal rights”, concluded Knops.

“The report also states remarks of the neglected ways from the Dutch government to Statia. However, officials in the Netherlands ask that this must be fixed as fast as possible,” explained Mike Franco.

The Netherlands is assuming direct control of the government of St Eustatius, part of the Kingdom of the Netherlands, state secretary for the interior and kingdom relations Raymond Knops announced on Monday. The decision was reportedly made based on a report from a committee that investigated the state of the island and concluded that there is a “gross neglect of duties” on St Eustatius.

The local governing body, the island council, will be dissolved and other officials will be relieved of their duties. A government commissioner will be appointed to administer the island’s affairs. Knops was due to travel to the island this week to explain the Dutch government’s decision to the local population.

The situation on St Eustatius has been a concern to the Netherlands government for some time, and the previous minister of home affairs Ronald Plasterk established a committee to identify the problems and make recommendations on how to correct the situation.

The committee concluded that the local government was characterized by lawlessness and financial mismanagement. There are also signs of discrimination, intimidation, threats and insults, and the pursuit of personal power at the expense of the inhabitants, the committee said.

“Citizens and entrepreneurs experience legal inequality. No administration is in order and the island is neglected in a physical sense,” according to the committee.

Knops said in a statement that since other measures have not brought the island council to heel, there is only one thing left to do: government intervention.

“It is the harshest measure, but now that everything else has failed, it is the only possibility that remains. The people of St Eustatius deserve better,” he said.